‘Girlhood’: Film celebrates young women with lives as hard and bright as diamonds 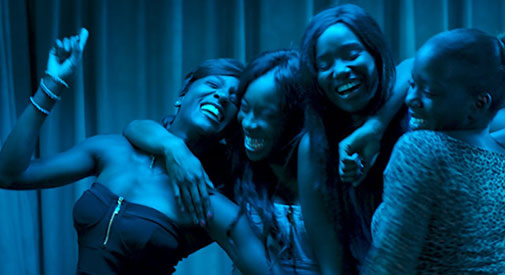 ‘Girlhood’: Film celebrates young women with lives as hard and bright as diamonds

I could have watched an entire movie of the “Diamonds” scene that shows up about halfway through “Girlhood.” It’s so infectious and speaks so exuberantly to the film’s themes of friendship and female adolescence that even though I loved the film as a whole, that’s the scene I’ll remember and the one I’ve kept recalling since finishing the film. It begins with one character staring directly into the camera, breaking the fourth wall and lip-syncing until two other supporting characters walk into the frame. This all builds until our lead joins them, careless and youthful and singing with her friends as their voices begin to intercut with Rihanna’s, and we get a peek inside a moment of unrestrained freedom for these young women. 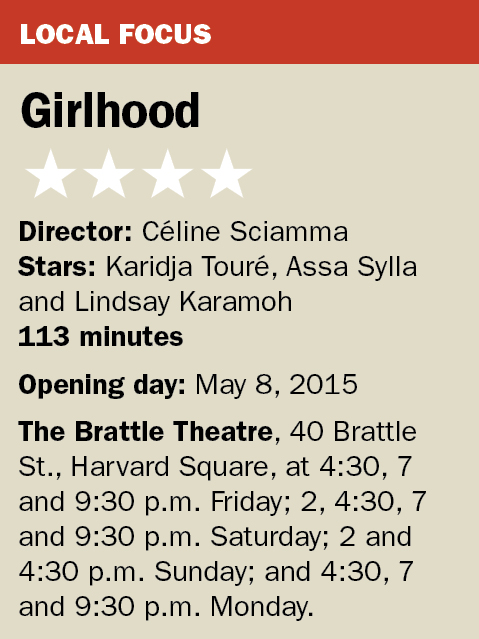 It’s one of the few moments where our lead Marieme (Karidja Touré) gets to act her age and let go of the weight of her real-world burdens. Marieme lives in an abusive home where her mother is rarely around and she must look over her two younger sisters, shielding them from her violent older brother. She’s stuck in a dead-end situation with little educational or career opportunities and lives in a neighborhood where men’s opinions are the law of the land. One day Marieme comes across three free-spirited, beautiful girls. Our lead latches on and joins in with them. They welcome her into a life of petty crime and violence, and as she becomes more entranced by them she grows into herself, creating a more demanding persona than the playful and shy character we began with. The scenes of violence – such as a raw showdown between Marieme and an opposing group leader – juxtaposed with youthful activities playing mini golf or splashing around in a water fountain reminds us how quickly these girls are forced to grow up.

Touré is quietly moving in the film and each of the four girls, all newcomers, deliver charming performances. Assa Sylla as Lady is a highlight, gifted with a fantastic screen presence and captivating to the point where I could have watched an entire second film dedicated to her point of view. All of these characters have stories worth telling.

Written and directed by Céline Sciamma (she also did the fantastic 2011 “Tomboy”), the script of “Girlhood” is littered with moments of remarkable female agency. Girls are the film’s focus, and she celebrates them. The opening moments, in which girls walk onto a football stadium and fight and play and vocalize their excitement, is self-indulgent – but so celebratory it hardly matters. A scene in the middle of the film where our lead explores her sexuality with her boyfriend and turns a classic power complex on its head is equally riveting, allowing the rare female gaze to take place in the film. The message is clear: This is a story about women and how they love and how they fight and the friendships they make.

The comparison to Richard Linklater’s “Boyhood” is almost too easy to make. If anything, “Girlhood” is more refreshing because of how seldom we see a female’s perspective in film so intimately and honestly, privy to moments of joy such as the “Diamonds” sequence as well as moments of fear. Coming-of-age stories with a male lead are common in film – as is the male point of view, period, and “Girlhood” displays a female perspective proudly in a familiar genre.

Sciamma and cinematographer Crystel Fournier shot the film in tight and personal shots, so Marieme’s on the inside looking out, either in the foreground with the landscape of her city obscured behind her or blurred as the city comes into sharper contrast and overwhelms the screen. She’s stuck, this much is obvious, and never more so than when we see what she so desperately wants. Take a scene that lingers on Marieme’s face as she shares a bed with her three friends after a night of freedom, peaceful and content, then a moment where she is at home as her brother lies on the couch behind her with a threatening arm around her neck. Marieme’s home is in shambles and she’s trying to find a purpose, a sense of self and a makeshift family elsewhere.

“Girlhood” sticks – it’s a moving film and does little to sugarcoat the situations these girls are in, especially Marieme, but it never gets bleak. Like Sciamma’s “Tomboy,” which looked delicately at gender identity in childhood, “Girlhood” manages to keep an edge of hope even when the hurdles placed in front of the characters seem impossible to overcome.