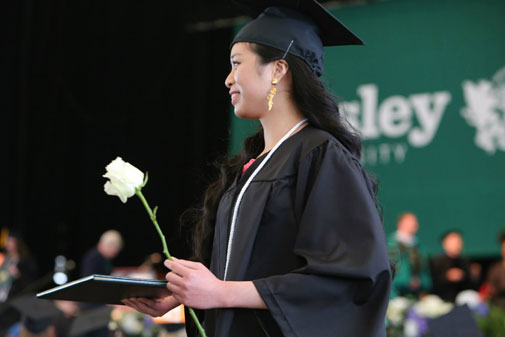 Lesley University conferred 1,651 degrees and certificates at commencement ceremonies Saturday at the Blue Hills Bank Pavilion in Boston, with the graduates hearing a call to social justice from speakers.

Thousands of students, faculty, families and friends gathered to celebrate the commencement. The school was founded in 1909 by educator Edith Lesley, and has transformed since, from a single Everett Street living room to its current combined campus and reported enrollment of 2,500 undergrads and 4,792 graduate students in 2013-14, a total of 7,292. This year continued a downward trend in the number of diplomas granted, though, down 37 percent in five years.

There were 1,152 master’s degrees, 471 bachelor’s degrees and 28 doctoral degrees granted this year.

Commencement speakers included Chris Van Allsburg, creator of the children’s classic books “The Polar Express” and “Jumanji” and two-time winner of the Caldecott medal. He talked about the circuitous path he took to success, starting as a sculptor who became an illustrator and then author of his own works – all the while drawing in charcoal because as a sculptor he never learned to draw with anything else. Chance “turned my limitation into a virtue,” he said.

“There’s some value in steely determination,” Van Allsburg told undergraduates, but ultimately advised them: “Forget about climbing the mountain, and follow the meandering stream instead.”

Also speaking to the undergrads was Pedro Noguera, a professor of education and executive director of the Metropolitan Center for Urban Education at New York University, whose research focuses on the ways schools are influenced by social and economic conditions, as well as by demographic trends. “These are indeed uncertain times – it would be easy to tune them out and hope they will go away,” Noguera said. “You bear a responsibility to do much more than that.”

Civil rights attorney Bryan Stevenson, executive director of the Equal Justice Initiative, had a similar theme in speaking with graduate students, urging them to continue Lesley’s “profound history and reputation for social justice and change.” He pointed directly to statistics showing disproportionate rates of incarceration for black men and single mothers.

“I hope you do something uncomfortable,” he said. “Justice comes, change comes, the world gets better when good people choose to do uncomfortable things. I want you to take this degree and beat the drum for justice.”

Deborah Loewenberg Ball, a professor in education at the University of Michigan, its education school dean and director of its TeachingWorks training program, and an award-winning researcher on math instruction and teacher prep, was another speaker linking the work of educators with social justice and civil rights, especially for the 74 million people now under the age of 18.

Good education should be accessible to all students regardless of color or economic status, so they may fulfill their potential, she said, and too often “our schools do not accomplish that mission.” She went on:

You’ve chosen, those of you who are graduating with education degrees, to do the most important work in our society – the development of human capital of our future. It’s a sobering and huge responsibility … Stand up, call it out, and work for change. Be a force out there. Be an educator and agent for justice … Create a better society for those 74 million young people. You have contributed so much, and I salute you for that. You are my hope. I look forward to your help in advancing these essential opportunities.