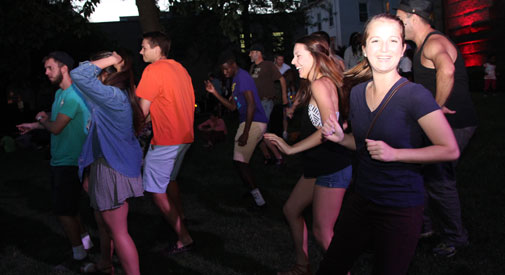 Cambridge’s free annual dance party has taken place every year since 1996, yet every year its exuberance – if not its very existence – takes people by surprise.

With the date for this year’s party set for 7 to 11 p.m. June 26, it made sense to get prepared by listing five things people love about it:

Residents come and actually dance. The crowd grows every year, once estimated at around 5,000 but in recent years growing to estimates of 10,000 to 12,000 people. (Update on June 22, 2015: Mayor David Maher said 20,000 people were expected this year.) As Phil DiPietro said last year, that gets things “Off the meter cray” and made Yolanda Perez feel like she was living in the “Gilmore Girls” town of Stars Hollow, Conn. Or as Mike Ava observed irreverently, “I haven’t seen this much white people dancing since the Royal Wedding.”

Cambridge City Dance Party: I haven't seen this much white people dancing since the Royal Wedding! Time to join it!😄 pic.twitter.com/Tq3s8iqu5n

The music spun by DJs has something for everyone. Jason Schwartz couldn’t believe he got the chance to dance to “Geno” by Dexys Midnight Runners, while Kaitlynn Anderson loved that she got her “Cotton Eye Joe” – especially since “I know four dances to this song!”

The dancers bring their own fun, making a night of music and a colorful light show even more exciting.

More awesomeness from the Cambridge Dance Party @ City Hall! These hoops are magical & she was terrific. <3 my city! pic.twitter.com/2OWFmorCA7

The city doesn’t just shut down Massachusetts Avenue between Prospect and Bigelow streets for dancing in the streets – it finds ways to make cars unnecessary. “There is a bike valet at the Cambridge dance party,” Michelle Buchman marveled last year. “I really love my neighborhood a lot.” (Service on the MBTA’s No. 1 bus line stops in Central Square at 6 p.m. and is expected to resume full service by midnight. Its red line T stop is two blocks from City Hall.)

It’s free and on a Friday, making it the perfect way to let off steam from work or study.

Just got back from a city-wide dance party in Cambridge. Perfect end to the week. #studyhardplayharder pic.twitter.com/pQdrOk6iwc

Writer Julia Swanson captured all these elements in a next-day report from the most recent dance party:

“This year the crowd seemed exceptionally large and really, really into it. There were people of all ages enjoying everything from disco to Latin to pop music, and regardless of what was played everyone seemed to be digging it. Even if you didn’t feel much like dancing it was a pretty amazing way to spend a Friday evening in late June.”

“As always, it’s the kind of event that reminds you that Cambridge isn’t just a city with a few big schools and lots of smart people,” Swanson wrote, “but a vibrant and fun community to be part of.”