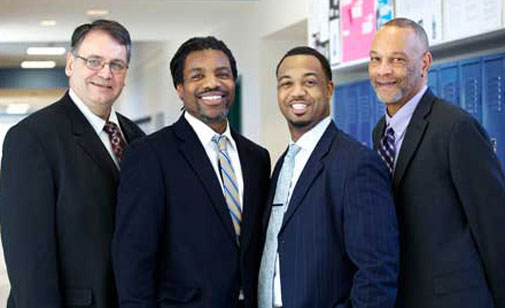 Heads of upper schools Ralph Watson, Jamel Adkins-Sharif, Mirko Chardin and Manuel Fernandez around the time of they assumed their roles in 2012.

An explosive encounter with upper school principals last week had School Committee members expressing an interest Tuesday in wresting back more control from the administration on how they run their meetings, including more direct contact with teachers and principals, fewer big block presentations of reports and more dialogues.

There was a bland enough start to the May 26 roundtable with five principals – the Amigos School’s Deborah Sercombe and upper school heads Jamel Adkins-Sharif of Vassal Lane; Mirko Chardin of Putnam Avenue; Manuel Fernandez of Cambridge Street; and Ralph Watson of Rindge Avenue – and Deputy Superintendent Carolyn Turk, who oversees the upper schools, giving PowerPoint presentations on each school.

The presentations were structured around academics, social emotional learning, electives and visual performing arts, family engagement and out-of-school time, and took up more than 90 minutes of the two-hour meeting. They were fairly upbeat lists of initiatives, activities, newsletters, interest groups and some academic advances. Of the five principals, CSUS’ Fernandez was the most frank about some stubborn challenges, citing difficulties in engaging some students and families. With this exception, the presentations gave the impression of successful schools with few problems that were unmanageable.

But they ended with a bang. Adkins-Sharif, who recently announced his resignation, making it clear he was no longer giving his “official” report, read a statement saying it was “insulting” to the principals to “be brought in here” three years after the start of the schools. Rather, he said, the committee “should respect the expertise of the professionals” who need “support and guidance and resources” and not take part in “election-year antics” of having the principals report. He also said the problem with the schools lies in part with “loud and entitled parents who never wanted upper schools – middle- and upper-class, largely white parents who go … straight to the School Committee.”

Member Mervan Osborne, after some stunned silence and a couple of vague non-questions to the principals from other members, volunteered to “confront the elephant in the room,” and said that in fact his “reference point is the teachers.” He referred to the teachers he has been hearing from one-on-one and in committee meetings who have said they feel the upper schools in particular need help. Regarding the timing of the meeting and the accusation of “election-year antics,” Osborne said: “Any time is a good time. This is not a ‘gotcha’ activity. I’m interested in talking about philosophies of education.” He did not mention that the committee had been requesting an update on the upper schools from the administration since early in the school year.

The roundtable included Superintendent Jeff Young at the table, with other staff members looking on, including Assistant Superintendent Jessica Huizenga, who oversees curriculum and instruction for the district. The audience included some upper school staff and teachers.

Never got the message

Turning to Fernandez, Osborne asked about the challenges in family engagement.

Fernandez made an impassioned plea for family liaisons: “Every other school [but the upper schools] has them. At the most critical time in these children’s lives we struggle to engage families who struggle with real-life issues … I know there are people at the district level and School Committee level who think they are a waste of time.” He said he would write a 20-page paper justifying the need for family liaisons if it would help.

“When these families are engaged,” he said, “we will see things turn around.”

That was the second bang. Committee members were unanimous in saying they never “got the message” that family liaisons were so critical to the upper school principals. “The urgency you have re: family liaisons – it’s not getting to us, we didn’t hear it from the district,” member Richard Harding said.

Member Fred Fantini added, “The message the School Committee got was, our role is not to interfere with day-to-day operations. The superintendent has made it very clear to us: Carolyn Turk runs the upper schools.”

“This issue of the family liaisons,” said Mayor David Maher, adding that Young and Turk may “not be happy to hear me say this, was brushed over. It was not brought up that you folks were pushing for this.”

In public comments at budget hearings this year, some parents and teachers did ask for family liaisons, with two parents saying explicitly that all the upper school principals had asked for them. But none of the public discussions or documents from the administration suggested that the principals identified family liaisons as critical – instead, administration members said new guidance counselors would meet academic and family engagement needs.

Maher went on to recall a decade or two ago when he was elected to the committee: “I would get phone calls from principals all the time, saying ‘I need your help.’ There was a role where the School Committee was seen as an ally and advocate.”

The outcry from Adkins-Sharif made clear that at least one principal was feeling defensive and on the spot, while the follow-up on the family liaisons made clear that the principals and committee had different understandings of what the other knew. Members ended the meeting agreeing that principals needed to come back under different terms, and that communications needed fixing.

In the absence of substantive issues on the agenda at Tuesday’s meeting, members did talk – and universally agree – about how they would like their meetings to change and how they would like to alter the dynamics between them, teachers, school staff and the superintendent’s office.

“Never should there be a time when you have 30 minutes left for seven officials to speak about anything,” Harding said Tuesday about the structure of the previous week’s two-hour roundtable, directing his comments to school department staff who organized the presentation. Member Fran Cronin applied that criticism more broadly, saying “even the way our meetings are structured – they do not allow air time for us to have conversations.”

“I would like us to rethink how we do the roundtables,” member Kathleen Kelly said. This school year, there were eight “superintendent presentations” at regular committee meetings and five roundtables scheduled outside of regular meetings. Roundtables do not follow Robert’s Rules of Order, and therefore can be less formal, with more staff sitting at the table as participating members. In Cambridge, roundtables are not televised, although taping can be requested; that is rarely done.

“Although the PowerPoint presentations have a lot of info,” Kelly said, referring to the upper school meeting, “they do not necessarily address the questions I wanted to address.” Member Patty Nolan suggested that reports be given to the committee at least five days before the meetings “so we can have questions rather than presentations.” Kelly offered to help create a new roundtable “structure” to allow for “real conversations.”

“I would also like us to create a safer space for the people we are bringing in front of us,” Kelly said. “People can feel like they are under the firing line when they are here.”

Harding agreed. “To have honest conversations, we need to sit at the table as colleagues and equals,” he said, referring to staff who are pulled into meetings to provide reports on their work, with their bosses present. “We have to make clear why we are at the table – it’s not to indict.”

Members also were united in wanting to hear more often from people “on the ground.” Teacher turnout at a budget hearing, resulting from an unusual explicit invitation to teachers by budget subcommittee co-chairmen Harding and Osborne, affected the committee, members have repeatedly said. On May 20, members met with the Amigos community at the school library to hear about their concerns.

“At the Amigos meeting,” Harding said, “we got to ask every single question about every aspect of that school. We had cross-conversations that allowed it to be a very productive meeting.” He wants more of those meetings. “Do we have each school come? Do we break out into teams?”

Maher joined Cronin in suggested “taking it a step farther” than just roundtable meetings, adding that the presentation to the committee of individual School Improvement Plans at regular meetings, which is supposed to be done annually, could be done a few at a time to allow for more focus and discussion.

One result of the upper school roundtable was a unanimous feeling among members that “we should be doing these meetings more often,” as Fantini said.

Osborne agreed. “I think what you heard was some talented leaders of schools disconnected from us – we’re disconnected from them,” he said. He floated the idea that each member “adopt” a school.  “If we … serve as our own liaisons with each school … so our school leaders feel supported by us, that we are working on same team.” Student member Lucy Sternbach seconded Osborne’s suggestion, saying she hears regularly from teachers that they are “scared” to come to committee meetings.

The committee agreed with Maher’s suggestion that the subject of “structuring meetings” be referred to the governance subcommittee to hammer out some proposed changes.

Young and Turk did not contribute to the conversation. 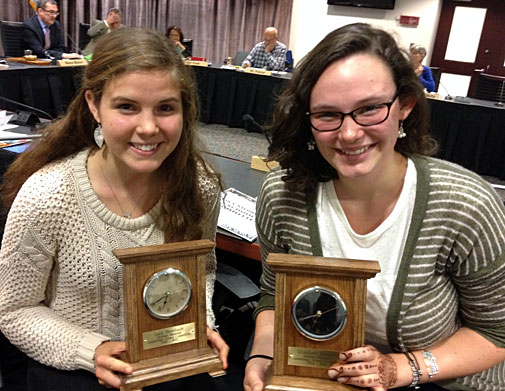 City Manager Richard C. Rossi gave an update on the May 30 fire at the 100 Putnam Ave. Martin L. King/Putnam Avenue Upper School building under construction. As reported, insurance is covering all losses. The construction crews will work double shifts, seven days a week to try to finish in time for the students to move in as planned for the September start of school from temporary spaces at 359 Broadway and the Kennedy-Longfellow School.

Though it is too soon to say definitively, Rossi said, they will continue to aim for King Open and Cambridge Street Upper Schools to move into the swing space as planned by September.

Sternbach and student committee member Liz Kubicek, both graduating from Cambridge Rindge and Latin high school this year, were given clocks in honor of their service, and praised highly by each committee member for their service. Sternbach, who served three years on the committee, will be going to Yale University. Kubicek will be attending the Commonwealth Honors College at the University of Massachusetts at Amherst.

The committee passed revisions to bullying policies after agreeing to Cronin’s suggestion that they consider a separate cyberbullying policy in the future.

Also passed without comment was the acceptance of $23,500 in grants, including $12,500 from Harvard’s Hasty Pudding Theatricals to subsidize student tickets to arts events.