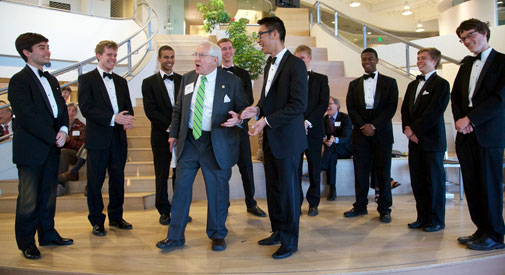 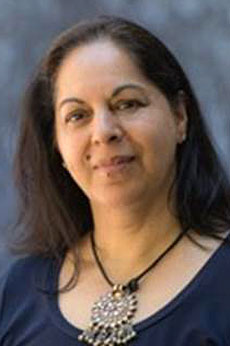 “Geeta is innovative, collaborative and action oriented, three key qualities that we sought,” said Richard Harriman, chairman of the Board of Overseers for the Foundation. “She brings a wealth of experience in addressing the issues and opportunities that we see in our community. Her blend of passion, bold thinking, humility and hard work will serve the foundation and the community of Cambridge well.”

Pradhan brings a deep background in philanthropy, urban planning and economic development. She comes from the Boston Foundation, where she oversaw community impact and grant making in education, health, jobs, housing and neighborhoods and the arts. Pradhan also played a leading role in a range of initiatives and collaborative ventures, including work on the Fairmount Corridor Initiative, a project on a grand scale seeking to create greater opportunity for Boston’s low-income neighborhoods by improving transit access as well as housing and community economic development through the arts, entrepreneurship and family asset development.

As the Boston Foundation’s strategic leader for the nonprofit sector, Pradhan helped seed and develop the Massachusetts Nonprofit Network, the state association of nonprofits and co-wrote the groundbreaking report “Passion & Purpose: Raising the Fiscal Bar for Massachusetts Nonprofits,” the first in-depth analysis of the economic and social impact of the nonprofit sector on the state.

Earlier, she initiated and co-developed the Boston Indicators Project, an award-winning Web-based resource that pioneered the use of data to track progress on key community goals at the regional and local levels. The Indicators Project integrates data across 10 sectors, including civic health, cultural life, economy, environment and energy, education, health, housing, public safety, technology and transportation.

Pradhan earlier served in local government as director of the Sustainable Boston Initiative after a leadership role in the Department of Neighborhood Development for the City of Boston.

She is a graduate of Harvard University, where she earned a master’s degree in urban design. Pradhan got a bachelor’s degree in architecture from the School of Planning and Architecture in New Delhi, India. An artist who studied traditional Chinese brush painting, she has held public exhibitions of her work.

“It is an honor to succeed Bob Hurlbut and add to his exceptional legacy,” Pradhan said. “My goal is to build alliances and partnerships necessary to mobilize the unique and extraordinary resources of Cambridge for greater access to opportunity and contribute toward an inclusive community for everyone who calls this great city home.”

The Cambridge Community Foundation was established in 1916, making it one of the oldest community foundations in the country. It is a key supporter of nonprofit organizations, distributing $1.1 million in grants in 2014 to meet local needs and support the aspirations of Cambridge residents. The Foundation provides leadership support to deal with urgent local challenges and partners with donors to provide a permanent source of charitable funds for the community. 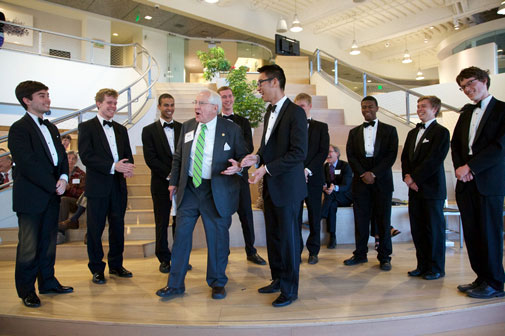 Retiring Cambridge Community Foundation leader Bob Hurlbut sings at his May 13 retirement ceremony with the Harvard Krokodiloes, a Harvard a cappella singing group.

In the 1990s, its board of overseers recognized the need for an executive director who could grow the Foundation and increase its impact on the community, where 11 percent of residents live in poverty, too many are homeless or hungry, and many others struggle to reach an American dream that still seems far out of reach. Under Hurlbut’s leadership, the fund has quintupled to $33 million from $6 million and forged dozens of partnerships in and effort to build community and make Cambridge a place of opportunity for all. CCF now returns a total of $1.3 million each year to a broad range of social service agencies.

About 280 supporters and community leaders gathered a few weeks ago to honor Hurlbut. The May 13 tribute at the Microsoft NERD Center raised around $220,000 in support of the newly launched Hurlbut Legacy Fund for Cambridge.

“I was overwhelmed and it has been my good fortune to work with so many good people in Cambridge – agency heads, donors and those who really care about the city,” Hurlbut said. “It is they who deserve the praise, and I’m glad to be a part of it.”

“Bob convened groups, collaborated with all and wove different interests into a strong fabric of support for our entire community,” said Richard A. Harriman, president of the board. “He brought his unique blend of tireless energy, passion, generosity of spirit, wisdom and love of Cambridge to all that he did.”

“Bob Hurlbut has been an amazing asset to the City of Cambridge and has touched the lives of countless people. Bob is a tireless advocate for all residents of Cambridge and has dedicated his career to improving the lives of young people, families and the elderly in our community,” Mayor David Maher said. “While Bob is retiring, his legacy will live on for years to come because of his hard work and commitment to Cambridge.”