What Cambridge has done to be Net Zero, and why all that work is just the beginning 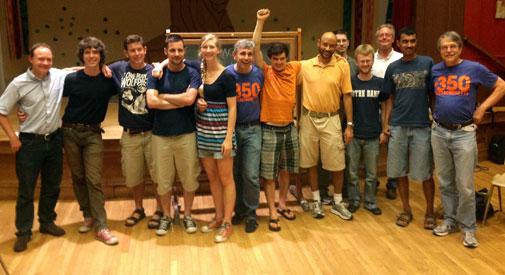 What Cambridge has done to be Net Zero, and why all that work is just the beginning

Last week, the City Council voted to adopt the final recommendations of the Net Zero Action Plan. Cambridge is officially on the path to becoming a net zero community.

“Net zero” is a target for buildings that don’t contribute to climate change. It is defined as a “community of buildings for which, on an annual basis, all greenhouse gas emissions produced through building operations are offset by carbon-free energy production,” according to the Net Zero Action Plan.

As the lead petitioner in the push for net zero, I want to thank the administration and staff of the City of Cambridge – and the members of the Getting to

Net Zero Task Force who worked to shape the plan, along with everyone who participated in the working groups and public forums associated with the project.

The adoption of the Net Zero Action Plan is just the latest example of the city’s commitment to sustainability. Cambridge was one of the first municipalities to adopt the state’s Stretch Energy Code, and in recent years the city has become more energy efficient, earning an official designation as a Green Community.

But despite these and many other positive efforts, the inconvenient reality of the global climate crisis leads us to an unavoidable conclusion: We must do even more to reduce our carbon footprint and limit the concentration of greenhouse gases in the atmosphere. Just last week, The Boston Globe reported on a terrifying study that says the planet is undergoing a sixth mass extinction – and unlike previous mass extinctions, this catastrophe is being caused by human activity, including the continued burning of fossil fuels.

In Cambridge, reducing carbon emissions means focusing on buildings. As one of the nation’s most bike-friendly and densely populated cities, about 80 percent of our carbon footprint comes from the energy used to power the built environment.

Recognizing this, in 2013 climate activists and neighborhood leaders came together to draft the Connolly petition for net zero emissions, a citizen-sponsored initiative to promote energy efficiency and require the use of renewable energy in all large, new buildings.

The petition was recognized as a first-in-the-nation attempt to create citywide standards for “net zero” building operations. After a series of public meetings, the petition was revised to include additional features based on community input, such as an option to create a local fund to support deep-energy retrofits of existing structures.

The petition campaign was hailed as a victory for the local climate movement. In late 2013, with leadership from state Rep. Marjorie Decker, the council voted to study the goal of becoming “a net zero community” – and last year, the city hired experts from the Integral Group to help guide the Net Zero Task Force. Also last year, the council approved an “early action” item, a Building Energy Use and Disclosure Ordinance that will serve as a foundational component of the plan.

With last week’s vote, a vision that began with a group of climate activists is now embodied in a comprehensive planning document that will set an example for communities across the nation.

The advancement of the project underscores the impact of grassroots organizing; the net zero petition was endorsed by more than 500 Cambridge residents, with support from Green Cambridge, the Massachusetts Sierra Club, the Cambridge Residents Alliance, the Association of Cambridge Neighborhoods, the Harvard Chapter of Students for a Just and Stable Future, the Cambridge node of 350ma.org, state Sen. Will Brownsberger, state Rep. Carl Sciortino, School Committee member Patty Nolan, world-famous environmentalist Bill McKibben, councillors Dennis Carlone, Nadeem Mazen, Minka van Beuzekom and many others. Working together, we managed to focus attention on the need for a comprehensive plan for getting to zero emissions.

Finally, it should be noted that while the Net Zero Action Plan provides us with the road for getting to zero emissions, it does not set the speed limit. In other words, having the plan in place is an accomplishment – but ultimately, the success of the plan depends on how fast we move to implement all of its various elements.

Fortunately, Cambridge residents are doing their part by mobilizing like never before – with the continued growth of Green Cambridge, with students winning on the fight for divestment at local universities and with the emergence of Mothers Out Front as a force in the movement for a livable climate – the drive for climate action in Cambridge is strong and growing.