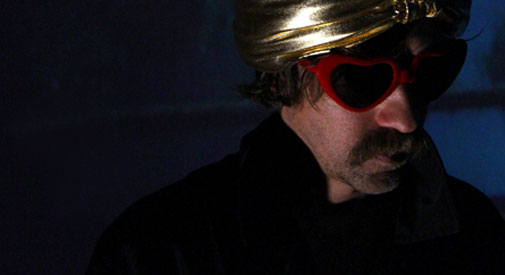 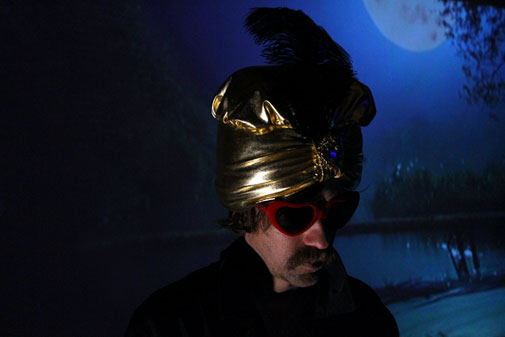 Alt-folk weirdo Milo Jones brings his skillful guitar play Wednesday to the Plough & Stars, but more importantly he brings his persona – a dissolute reputation for song selections that border on the obscene, delivered in a bedraggled and distant fashion that makes it hard to look away. He’ll put you in mind of a snake hypnotizing its prey before striking, never getting around to killing you because he just doesn’t care enough.

To give you a sense of the sensibility: His most-viewed video is a cover of Momus’ “I Want You, But I Don’t Need You,” followed by Serge Gainsbourg’s “Lemon Incest.” In his cover of “I’m Not in Love” by 10cc, the first shot is Jones holding what looks like a respectable erection in seersucker suit pants; in anticipation of his Wednesday gig and a July 23 show with projections at the Internal Matter bistro in Boston, the song he’s flogging is a David Allan Coe cover called “Don’t Bite the Dick.”

So there’s no question what the barflies at the Plough & Stars are likely to encounter when they’re inevitably drawn in by Jones’ subtle delivery. But there’s also no question why he’s won such acclaim from reviewers nationwide, from the defunct Boston Phoenix (“No one – and we mean no one – defiles the Great American Songbook with as much skill, poignance and black-hearted wit as local gin-mill revenant Milo Jones”) to the Village Voice (“Witty, endearing, hilarious”) and L.A. Weekly (“a crooning trickster figure of the first order”) as well as, thanks to consummate skill in writing his own tunes as well as putting his spin on uncountable covers, comparisons to Leonard Cohen, Paul Westerberg, Townes Van Zandt and Nick Drake.

Go to get aurally felt up by this louche, entertaining troubadour; expect to leave feeling that you’ve been touched.

Milo Jones plays at 10:30 p.m. Wednesday at The Plough & Stars, 912 Massachusetts Ave., Mid-Cambridge near Central Square. If there is a cover charge at the bar and restaurant, it doesn’t go above $5.