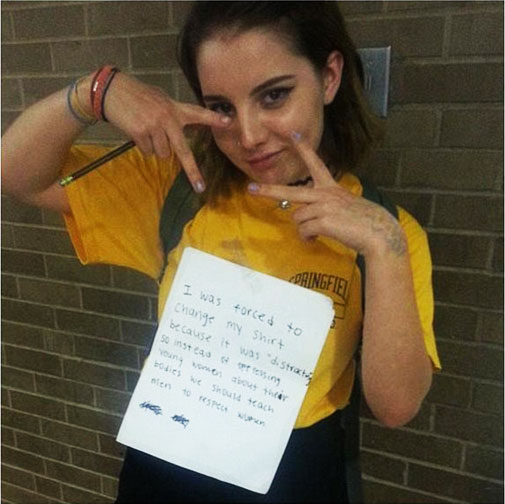 A dress code controversy in Staten Island, N.Y., last fall led to a student protest, one of several nationwide recently. The sign says: “I was forced to change my shirt because it was ‘distracting.’ So instead of oppressing young women about their bodies we should teach men to respect women.” (Photo: Twitter)

Sexism-conscious students have won a victory on the high school’s dress code: a chance to reverse a policy that “shames” and “inappropriately sexualizes” girls.

Among the 50 superintendent recommendations for approval at Tuesday’s four-hour School Committee meeting was a revision to the student dress policy, adding as a first sentence, “Students are permitted to dress in compliance with this dress code in a manner consistent with their gender identity.”

But the section that got a reaction was a carry-over from the existing policy: “Clothing will be deemed inappropriate if it is disturbing to other students or in any way interferes with the educational process. This includes but is not limited to bare midriffs, short shorts, low-slung trousers and other clothing which is offensive and/or violates acceptable standards of dress.”

Dress codes have been drawing fire nationwide in the past year, with challenges being raised everywhere from a Milford, Conn., middle school to an Appleton, Wis., high school to the University of Texas at Austin Nursing School.

The local dress code brought the only agenda-related public comment of the night. Cambridge Rindge and Latin School student Will McArthur read a statement from fellow student Charlotte Rosenblum who, echoing her opinion piece in the May edition of the high school newspaper, The Register Forum, said the code “inappropriately sexualizes” women by “teach[ing them] they need to cover up.” (Her essay is on Page 7 of the issue.) Her column contends that there is a double standard in the rules and enforcement, and that girls are regularly reprimanded and “even sent home” for wearing short shorts or “showing too much skin.”

McArthur added that one day he and the rest of the boys’ track team wore their track shorts to school. “They do not meet dress-code standards, and none of us were called out,” he said.

This struck a chord with the committee. Member Kathleen Kelly, confirming that the code has not been redrafted for at least 15 years, said it was time for “the community as a whole come to some kind of understanding on what a dress code is to accomplish.”

Member Fred Fantini moved that the policy be referred to CRLS principal Damon Smith to revise with student input, which passed unanimously.