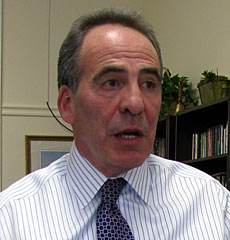 The School Committee will conduct an evaluation of the superintendent in a special meeting from 4 p.m. to 6 p.m. Tuesday. It is open to the public, but will not be televised and will be held offsite, in the first-floor conference room of the Cambridge Police Department, in the Robert W. Healy Public Safety Facility at 125 Sixth St., East Cambridge near Kendall Square.

There is a long tradition, explained committee vice chairman Fred Fantini, of conducting these evaluations offsite. “I think the idea is that there would be room for more open conversations” somewhat out of the public eye, because the offsite locations are not equipped for audio or visual recordings.

“Frankly, though,” Fantini added, “I suspect that that will change in the future,” saying that the open meeting laws that went into effect this summer will likely help push the evaluations back into the committee’s hearing room.

Young is in office only through June 2016, after committee members opted to offer him a single year more instead of the standard three-year contract he’d received since arriving in the district from Newton in 2009. Despite being required to have annual evaluations, which involve upfront work by the superintendent and committee, Young’s last review was two years ago. This week’s review will be the first under the new state Department of Elementary and Secondary Education’s system for educator evaluations, which Fantini says is considerably more involved and includes more concrete information and measurable “smart goals.”