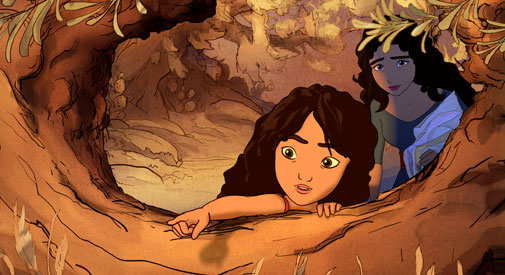 Kahlil Gibran’s “The Prophet,” as demonstrated in Roger Allers’ new film adaptation, isn’t suited for a linear narrative. To play to younger audience sensibilities, though, the poet’s works are strung together by a mother-and-daughter relationship to create a narrative thread and emotional through line. Based on Gibran’s most popular book of philosophic poetry, the film works best in its broken-up vignettes with different animators taking individual stories. 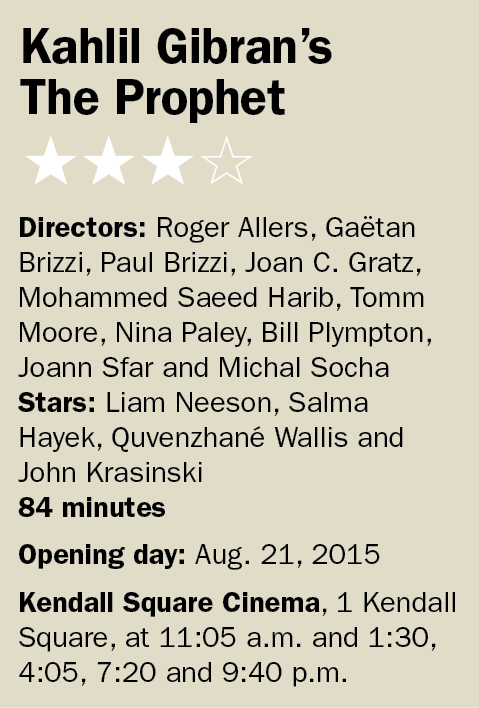 Set in a Mediterranean seaside village, the story follows Kamila (Salma Hayek) and her daughter Almitra (Quvenzhané Wallis). Almitra hasn’t spoken since the death of her father, and is increasingly free-spirited in her actions, leading to trouble for her and Kamila. This changes when she meets the man Kamila works for, Mustafa (Liam Neeson), an exiled artist and poet. What at first seems like a journey to his freedom turns into a chain of events that lead to his eventual imprisonment. Along the way Mustafa bestows upon onlookers and friends lessons and tales about motherhood, freedom, love, marriage and death.

The cast on board is impressive, with strong turns from Alfred Molina and John Krasinski (who with this and “The Wind Rises” is turning into a strong voice actor). Hayek and Neeson in particular give great performances, Neeson lively and Hayek soulful.

The individual vignettes are so grand and beautifully animated that the main animation by Allers suffers for it. The characters are flatly drawn, with the landscapes inspiring more intrigue than the people themselves.Bill Plympton’s section stands out due to its crude nature, seemingly drawn in crayon, with each line prominent and the design extending itself way past realism, exaggerated to be purposefully grotesque. Tomm Moore’s section, in contrast, is graceful and haunting, and after this year’s “Song of the Sea” it’s difficult not to consider him one of the best directors in animation today.

With a score that consists of talents such as Damien Rice, Glen Hansard and Yo-Yo Ma, this is truly a film centered on craftsmanship. There’s a wealth of material in Gibran’s work, that much is clear, but as a film it almost would have worked better without the story connecting each segment.

It’s hard not to see the appeal of a film spearheaded by Hayek with source material so rich in culture, love and spirituality. The film nearly captures it, with moments of such beauty and with animation and music that lifts the story from its page, soaring just as Almitra believes Mustafa can. The last third in particular matches the ambition of those behind it, as the story centers on the ideas of morality and freedom and the imagery tends toward watercolor.

The film in its entirety may fall short of some of its stronger vignettes (such as Moore’s and Plympton’s) but I can’t fault the ambition and excitement of the project itself. “Kahlil Gibran’s The Prophet” is a beautiful story with some shaky execution, and is worth a watch for the talent involved.