Six things to do this weekend: Sept. 4-6 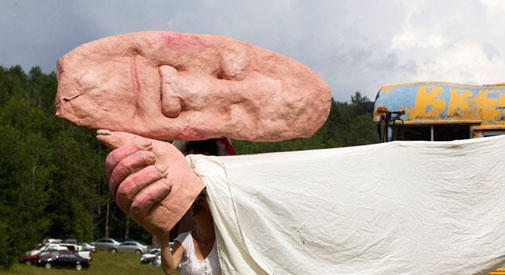 Six things to do this weekend: Sept. 4-6

Out of the Blue Back to School Fest from 6 to 11 p.m. Friday at Out of the Blue Art Gallery Too, 541 Massachusetts Ave., Central Square. Tickets are $10 for this 18-plus show.

If you’re not into the folk and Americana of the Labor Day weekend’s longtime music festival at Passim, it’s time to get excited for Out of the Blue’s first go at the genre, a dog-friendly blast with two stages for back-to-back bands, surrounded by dazzling artwork and complemented by local beer and wine. Bands include Magic Shoppe; The Channels; Steep Leans; Horsehands; World Cup; Jarva Land & The SharkBag Collective; Sunshine; Só Sol; Flaming Dragons of Middle Earth; Kiss Concert; Puzzle Mansion; and Nathan Ventura. Information is here.

Campfire. Festival throughout the Labor Day weekend, including starts at 6 p.m. Friday and noon Saturday, Sunday and Monday at Passim, 47 Palmer St., Harvard Square. Tickets are available as $25 festival passes and $10 daily passes.

Passim’s twice-a-year homegrown folk and Americana music festival runs throughout the long weekend and brings dozens of acts to the stage – and more: Since the goal is to develop talent and celebrate the local music scene, organizers say the shows typically blur the line between performer and audience member. The all-ages event, now in its 17th year, has a full schedule here. 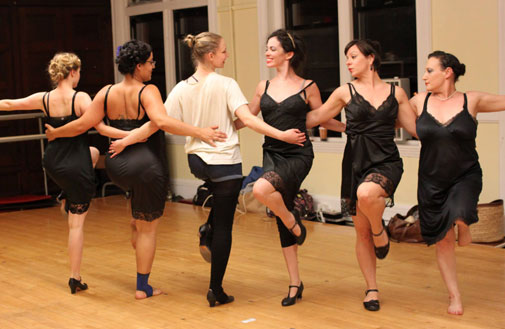 24-Hour ChoreoFest dance concert starting at 8 p.m. Friday with concepts and culminating in concerts at 2 and 4 p.m. Saturday at The Dance Complex, 536 Massachusetts Ave., Central Square.  Tickets are $15.

Each season, Luminarium locks dance companies into the historic Dance Complex for a marathon choreography session resulting in two matinee shows. It’s believed to be the only 24-hour choreography festival in America. This year, Luminarium, Monkeyhouse and Paradise Lost join forces with Impact Dance, Nicole Laliberte, Jennifer Roberts and Jess Chang, Ryan P. Casey, and OnStage Dance and livestreams the entire overnight creation process. The stream will be here when ChoreoFest begins. Information is here. 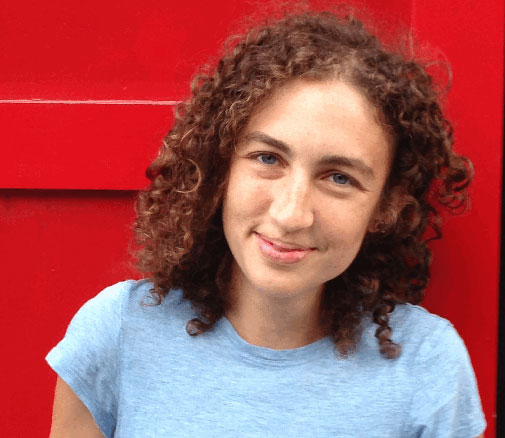 The length of the Labor Day Weekend encourages longer events even in poetry, and this event brings five readers to the stage in what is actually a pretty tidy two hours: Adrienne Raphel, a doctoral candidate at Harvard who has published in the New Yorker, Paris Review, Lana Turner, Prelude, Wag’s Revue and other journals; Jessica Laser, whose poems have appeared in the Boston Review, Iowa Review, Lana Turner and elsewhere; Christian Schlegel, a doctoral student at Harvard and Somerville resident whose first book of poems, “Honest James,” was published Tuesday; Jake Fournier, who has published poems in Lana Turner, Meridian, Petri Press and elsewhere and will be working as a language assistant near Versailles, France; and Jessie Gaynor, who has published work with McSweeney’s, the Paris Review Daily and Spork Press and is the executive editor of SparkNotes (where she still encourages people to read the whole book). Information is here. 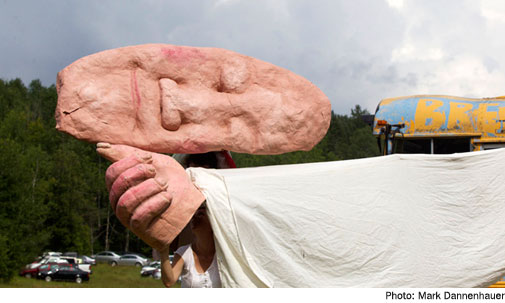 Bread & Puppet Theater’s “The Overtakelessness Circus” at 3 p.m. Sunday at Magazine Beach, at the river end of Magazine Street in the Cambridgeport neighborhood. Free, but pass-the-hat donations are welcome.

The shaggy, 52-year-old Bread & Puppet Theater troupe is back from Vermont for its annual end-of-summer visit to remind everyone what hippies look and act like, and also what fun plus political discourse feels like. Bread and Puppet uses a visually rich, slapstick style of street theater filled with huge puppets made of paper maché and cardboard along with masked characters, political commentary and a brass band for accompaniment. In the paraphrased words of the troupe, “The Overtakelessness Circus” aims to merrily (for the most part) explore matters that concern us all – and “even if some of the circus acts are politically puzzling to adults, accompanying kids can usually explain them.” Cheap Art, posters and banners are available for sale afterward. (In case of rain, the nearby Morse School, 40 Granite St., will host the show.) Information is here.