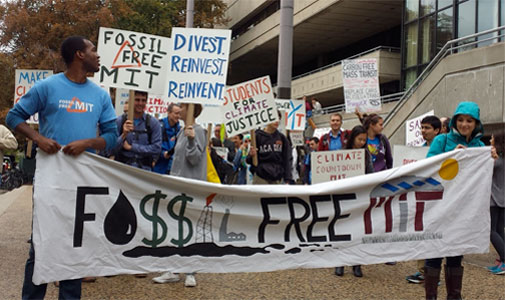 Students, faculty and community members file out of the Massachusetts Institute of Technology student center, heading for the Media Lab and an Oct. 2 meeting of President L. Rafael Reif and the MIT Corp. (Photo: Eben Eliot Bolte Bein)

Approximately 100 self-proclaimed nerds-turned-activists marched across the Massachusetts Institute of Technology campus last week to call on President L. Rafael Reif and the MIT Corp. to divest its endowment from fossil fuels.

“It’s easy to think that climate change can be solved, that we can just plug it into an equation or assign a variable and it will be over. Unfortunately, there is no app for that,” said Rajesh Kasturirangan, an institute graduate, mathematician and associate professor at the National Institute for Advanced Studies in India. “We must combine our enormous technical creativity with moral imagination to address climate change,” he said to the gathered crowd Oct. 2.

Next, Fossil Free MIT co-founder Geoffrey Supran stepped up to the mic – one powered by three audience members on bicycles linked to a generator. “I’ll be the first to admit as a scientist and engineer, advocacy and activism don’t come easily to most of us,” Supran said. “I’m shaking right now.” Laughs and a few cheers answered back before he continued. “When the history books get written about this moment, let them say that when our time came, you and I, we gathered here on a rainy October day and in our own gentle way, we shook MIT and we shook the world.”

The rally concluded with a march to the Media Lab, where Reif was holding his annual meeting with MIT Corp. members, including David Koch, a multibillionaire in the fossil fuel industry. In anticipation of the rally, the Office of the President said in a statement that the “institute’s faculty, students and other researchers have a long record of pioneering climate research and energy innovation.”

But some, such as MIT professor Ian Condry, think the institute’s commitment to climate research won’t be enough. “We also need to make a statement. And the clearest statement is to divest. This is the first step to building political will. We can’t spend all day working in our labs on this technology and then allow our endowment to undo that at night,” said Condry, a cultural anthropologist who studies how social movements such as rap music and Japanese animation become global phenomena.

In an open letter to fellow faculty, civil engineering professor Charles Harvey argued a similar point by invoking institute’s pedagogical obligations. “What better way to educate the public, let alone our own students, about the effects of carbon emissions than to follow through on the clear implications of our own research on our own investments?” At this time, 89 institute faculty members have signed an open letter asking Reif to divest.

It remains difficult to estimate how much of the institute’s $13.5 billion is invested in fossil fuels. A 2014 article in The Wall Street Journal estimates that they account for 5 percent of the average American college’s endowment.

Despite his desire to push the divestment issue, Condry does give the administration “some credit” for forming the Climate Change Conversation Committee during the past academic year. This is in sharp contrast to Harvard’s administration, which shut down its own divestment movement with a single statement from President Drew Gilpin Faust. Reif’s office explicitly stated that “the MIT administration welcomes the ongoing efforts of MIT community members to bring attention to this challenge; the open and respectful expression of ideas is essential to who we are as an institution.”

That community has taken the president at his word. Fossil Free MIT’s petition now has 3,428 signatures representing 29 student groups and is backed by resolution from the City Council. Two weeks ago, NASA scientist Jim Hansen, actor Mark Ruffalo and 33 other prominent figures joined the divestment movement in their own open letter. With an all-encompassing hand gesture, Fossil Free MIT member Jeremy Poindexter said, “the purpose of this rally is to synthesize all of that into one event.”

Eben Bein is a freelance writer and a graduate student in MIT’s Graduate Program for Science Writing. He taught high school biology for five years and lives in Somerville.