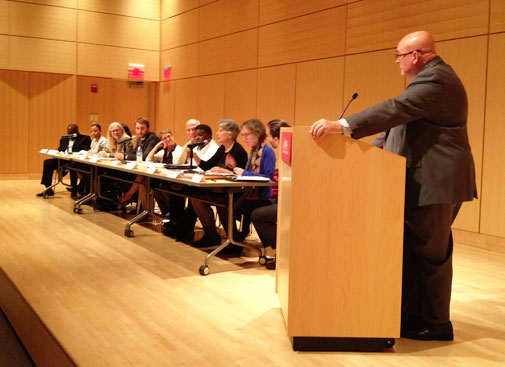 The 11 candidates for School Committee tried to communicate their experience and ideas for the school district in one- and two-minute allotments Wednesday at their first forum of the election season. In a kind of speed-dating-for-politicians format, the five incumbents and six challengers each tackled five questions in one-minute bites, getting two minutes for opening statements and one minute for closing statements in front of an audience of about 70.

The event was sponsored by the school staff union Cambridge Education Association, Citizens for Public Schools-Cambridge and Jobs with Justice.

Earl Wiman, an executive committee member of the National Education Association, was an amiable moderator, warning that he would be ruthless about sticking to the clock – and even brought a “quiet chair” to send folks to if they went over time. (He didn’t have to use it.) Some candidates had more success than others with the lightning speed format, but by the end they all managed to relay some sense of their message.

Although the topics chosen in advance from suggestions by CEA members and the public ranged from charter schools to testing to achievement gaps, the answers often revolved around improving collaboration between the committee, administration, families and teachers, and about finding ways to better support teachers.

“When I think about how much time I and everyone at this table have spent out in the community going door-to-door while campaigning,” said first-time candidate Jake Crutchfield, “if we could do a fraction of that canvassing during the school year, I can’t imagine how powerful that would be.” Crutchfield, a community organizer connecting Cambridge students to out-of-school programs who has also worked as a substitute teacher in nearly all of Cambridge’s public schools, emphasized the role the committee should play in outreach to families and teachers. He wants to see members spending more time going to school council and parent-teacher meetings, visiting classrooms and reaching out to a broad range of families – “bringing politics to where families are.” 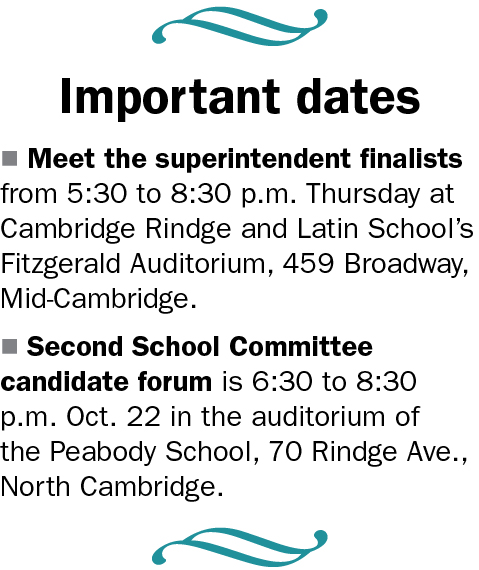 Challenger Pia Cisternino pointed to her track record as a parent advocate for special education inclusion support and less testing in schools. “For me, [collaboration] is not just an abstract belief,” she said. “I have been doing this as the [parents’ special education council] co-chair and a Haggerty School council parent rep. Policy-making works best when it’s bottom-up and there’s communication at every level.” In the past few years, she has used that collaborative process, she said, to help get more music education included in the budget and to increase school-based social workers.

Asked about the relationship between the committee and superintendent, everyone agreed there should be “collaboration and accountability.” “Of course collaboration should always” matter, committee member Richard Harding said, “but you have to have trust. If you don’t have trust, what are you getting done? The School Committee is like a public board of directors: We should stay in our line and influence [the district] from the altitude we were elected to influence it from.” A proven collaborator, he said, “it is up to us as a community to get behind this new leader who I know will support our schools.”

Superintendent Jeffrey Young is in office only through June 2016, after committee members opted to offer him a single year more instead of the standard three-year contract he’d received since arriving in the district from Newton in 2009. The public is invited to meet with the finalists to replace him from 5:30 to 8:30 p.m. Thursday at Cambridge Rindge and Latin School’s Fitzgerald Auditorium, 459 Broadway, Mid-Cambridge.

Member Patty Nolan emphasized respect in the relationship between the committee and superintendent. “Our role is also monitoring and oversight,” she said, “but my dream is mutual respect. I want a superintendent who knows that we [committee members] are their resource, that we all have different strengths” and that they bring to the table their roles as representatives of the community and teachers. Nolan pointed out that she was the only committee member who voted against a seventh year for Young, “despite, along with many others, wanting him here originally,” because, she said, he did not fulfill his responsibilities.

Given that the event was co-sponsored by the CEA, it was not surprising that candidates expressed a lot of support for teachers.

“I like to think of myself as a friend of teachers and a friend” of the Massachusetts Teachers Association, said 32-year committee member veteran Fred Fantini (who also joked that “I obviously am a fan of term limits”). “I have 30 years of negotiating experience I bring to the table. This system has been without a labor problem in the last 30 years … Our teachers work hard. We have to care not only about communication [with them], but about acting on that communication.” (Fantini has no website. “No twitter. No facebook. No campaign manager. I just have me,” he said.)

Challenger Emily Dexter emphasized more support for teachers in terms of adding staff and shrinking class size, and in reexamining the budget allocations “from the ground up” – identifying teacher needs first rather than determining a total budget amount first. “Teachers need to communicate [their needs] directly to the School Committee. That doesn’t happen enough.” The teacher budget hearing last year was important, she said, but the committee needed to hear from all teachers. “I’m a big fan of surveys as a way to get information anonymously. The School Committee should be in schools and classrooms as much as possible.” Dexter’s children both went through the Cambridge public schools, and she has written analyses of district budget allocations.

The candidates agreed there was too much testing and an overwhelming number of new district initiatives, and all supported a “serious review” of assessment schedules.

“We need to change the culture around testing,” challenger Manikka Bowman said. “First, we need to leverage testing to see what the needs are for our kids. But there are also externalities that impact a district’s ability. We should be advocating at the state and national level” for a reassessment. Cisternino agreed and pointed out her work in organizing resistance and petitions against excessive testing, and Crutchfield said, “We may need to consider an initiative to pause” new initiatives.

Committee member Kathleen Kelly wondered about a link between increased mental health issues among students nationwide and more assessments.  “I suspect that they are connected,” she said. “The emphasis on testing and academics as early as possible has us moving away from the other parts of education in a classroom – learning team-building, building community, building relationships.” Kelly also agreed that new initiatives need to slow down, saying that she was the one who asked the “tough questions” in a committee meeting that ultimately led to denial of am administration-proposed professional development program for teachers.

Committee member Fran Cronin said a primary goal for her is “to make sure that all of our kids graduate ready to succeed. We have the resources. We have the knowledge. I’m not sure we have the will or the intent. But it is up to the School Committee to make sure that we set the tone and that we succeed at giving every student what they need.” Cronin said that in advocating for her son, a special needs student, she “learned firsthand that despite our resources, navigating them is a real challenge,” and she wants to see more equity of access.

The city’s persistent achievement gaps apparently motivated several of the challengers to run for office.

“Closing the achievement gap is one of the reasons why I want to be on the School Committee,” said second-time candidate Elechi Kadete with visible enthusiasm. Kadete arrived in Cambridge at age 4 from Dar es Salaam and began in public schools knowing no English, he said. He became an advanced student, he said, and graduated from Brandeis, but he saw many of his cohort left behind. “Why is the school system working for some kids and not for others?” He suggests broader early education, less standardized testing that allows the teachers to give individual attention to kids instead of being forced to “teach to the test,” improved family engagement and mentoring and “supporting world language. The world is changing and we need to make sure that every student can speak some language other than English.”

The achievement gap is also one of the reasons for running claimed by first-time challenger David Weinstein. An educator himself with one child in Cambridge Public Schools and another soon to be, he wants to expand early education “with arts and play as part of that.” He advocates lower teacher-student ratios, especially in the junior kindergarten through third grade, he said, and he wants “high school staffing that allows electives to be available to everyone.” Like Dexter, Kadete and Cisternino, he mentioned his concern about segregation in high school honors and non-honors classes, emphasizing improved counseling to partially address that.

Bowman also worried about staff diversity. “We have a seriously stratified school district,” she said, “when we look at who is teaching our kids and how we are going to encourage the 60 percent of our kids who are of color. I grew up in an area where 80 percent of teachers were teachers of color. I always knew that college was in the picture for me. We need to show them as well as tell them” that they can be leaders, she said, adding later that this was one reason she was running – to be a role model.

The second committee candidate forum is 6:30 to 8:30 p.m. Oct. 22 in the auditorium of the Peabody School, 70 Rindge Ave., North Cambridge. It is sponsored by the Cambridge Citywide School Advisory Group of parents, Cambridge Youth Council and Cambridge Advanced Learning Association.

This post was updated Oct. 10, 2015, to correct that Jake Crutchfield wanted to pause new initiatives.