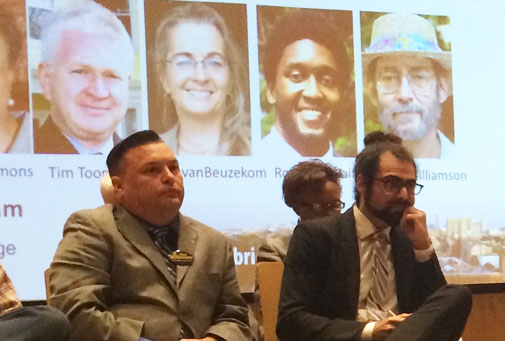 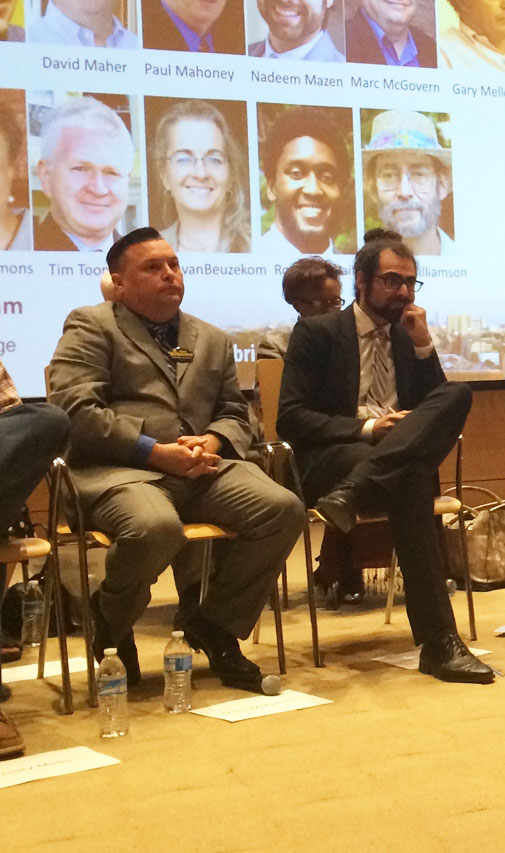 City councillor Nadeem Mazen, right, has had to answer questions about his campaign finances from incumbents such as Marc McGovern, sitting next to him, and Tim Toomey, whose image is seen behind them onscreen. (Photo: Marc Levy)

A conversation about whether candidates should take campaign donations from real estate developers was taken dramatically off course Thursday at an election forum when city councillor Tim Toomey turned the spotlight on the finances of councillor Nadeem Mazen.

Mazen has nearly 50 “letters of violation” from the state Office of Campaign and Political Finance stemming from poor reporting practices, including the failure to identify the occupation of contributors, Toomey said, explaining later that “it is pathetic and hypocritical for councillor Mazen to be filing orders about clean election programs and commenting on other campaign finance matters when he blatantly ignores the campaign finance rules in effect.”

While some in the community worry that developer contributions to city councillors give them more access than the usual citizen to officials who decide the fate of large construction projects, Toomey pointed out that Mazen “just deposited $30,000 from out of state, not from Massachusetts, and I’m not sure who’s behind that and what kind of occupation those individuals have.”

Councillor Marc McGovern, running with Toomey on a “Unity Slate” of seven incumbents, also complained that Mazen shouldn’t be pointing fingers about campaign transparency, a position backed as well by other members of the slate who did not contribute comments on the record.

The councillors said they didn’t believe the money coming into Mazen’s campaign without initial identification represented an unknown special interest equivalent to developers. In the words of McGovern, “The only reason I think this is an issue is because [Mazen] is the one pointing fingers at others about transparency and donations.”

During and since the Thursday forum, sponsored by A Better Cambridge and moderated by WBUR radio personality Robin Young, Mazen has provided short and long answers about the campaign finance reporting issues.

The short version, as Mazen said publicly Thursday, is that “the last time [Toomey] brought this up I said it was false, and then I called the Office of Campaign Finance and asked, ‘Are my records actually out of order?’ and they said, ‘No, you’re in great shape.’ I talked to the person in charge of my account directly.”

On Friday, an Office of Campaign and Political Finance official confirmed that, saying there are “no outstanding issues” for Mazen. It was impossible to say the account was in “great shape” after a correspondence dating back to September 2013, said OCPF’s director of communications and public education, Jason Tait, because “that’s not a characterization we’d use for anyone.”

Mazen’s citing of a clean campaign bill of health was not accepted easily by Toomey. “You received letters. There’s a difference between correcting them and when you submit them, you submit them wrong,” said Toomey, a city councillor for 26 years. (McGovern put that a different way: “You fixed it, that’s great, but why did it go six months?”)

Toomey noted the sheer number of issues with the OCPF, saying in a phone interview later, “here you have 30-plus complaints and no one else has anywhere close to that.”

“It shouldn’t even be three,” Toomey said.

Toomey has two, Mazen noted, both from the previous election cycle in 2013. “I’m [two years] into this and we’ve tightened up the ship,” Mazen said. “He’s 25 years into this and he still has leaks in the hull?”

The Mazen campaign is also not unique in having a larger number of complaints; Toomey and other councillors seemed not to know that fellow Unity Slate member and vice mayor of the city, Dennis Benzan – a first-termer like Mazen – has 34 items in his OCPF audit issues compared with Mazen’s 38. (Each line item is an issue, but a single letter may have several issues, and a letter may have several dates, Tait said.)

Cambridge’s online politics pundit, Robert Winters, noted acerbically on his Cambridge Civic Journal in April that he was “getting really tired of trying to make sense of the Mazen campaign finance reports. They are filled with countless errors. Perhaps he should consider hiring an adult as a campaign treasurer,” an apparent reference to Mazen making a point of using his campaign as a training ground for citizens interested in being civically engaged.

Mazen, acknowledging that this approach accounted for problems but also for their “assiduous” correction, rejected the criticism. “Winters means ‘hire a professional.’ Now we have not just one, but several people who are trained to do this. This is how I want to be doing training,” Mazen said. “I want to be engaging people in the process of learning by doing. We’re talking about whether a few new trainees can respond to a letter? We can respond, we can improve and we did improve.”

He also explained the out-of-state contributions that concerned Toomey as the results of fundraising among his personal network of fellow Muslims in areas such as Detroit and San Francisco. “These are people I organize with on a local and national level,” he said. “You know why I go out of the city? Because Muslims aren’t organizing in the civic sphere. They’re doing service work, they’re doing actual [non-governmental organization] work at a very high, nondenominational level, but when it comes to actually participating in the civic and political sphere, people are literally scared. My generation is looking for a place to plug in, but they just don’t know where to start.”

Winters’ website, which Toomey noted raised various other questions about Mazen’s campaign finances in April, posted an analysis of the year’s campaign donations through Oct. 10 and found that, among candidates with at least $1,000 in receipts, analysis of OCPF data showed Mazen to have the lowest from within Cambridge: 17.5 percent. That was followed by his fellow Slate for Cambridge member Mariko Davidson at 28.4 percent and then Toomey himself in third place, at 33.1 percent.

Toomey had taken a months-old issue and revived it when he was supposed to be talking about whether taking developer money was appropriate, Mazen said:

“They are insinuating it’s unclear where my donations are coming from. And it’s very clear. You can look at my OCPF today and for the last several months and have a very clear idea that my donations are coming from individuals without developer or special interest ties who are former Cambridge residents and non-Cambridge residents with an interest in a Muslim doing well in office, something that is underrepresented in this city and across the country. Those are reasonable types of support that Americans and Cantabrigians tend to stand behind. What Americans do not stand behind at all, on any level, is the idea that someone would take money from a special interest that is either trying to curry favor, gain increased access or in many cases get a vote on an upcoming issue.”

“These folks are desperate to deflect attention from their own Office of Campaign and Political Finance records,” he said of Toomey and other candidates bringing up his finances.