Superintendent decision possible in days for three finalists with many similarities 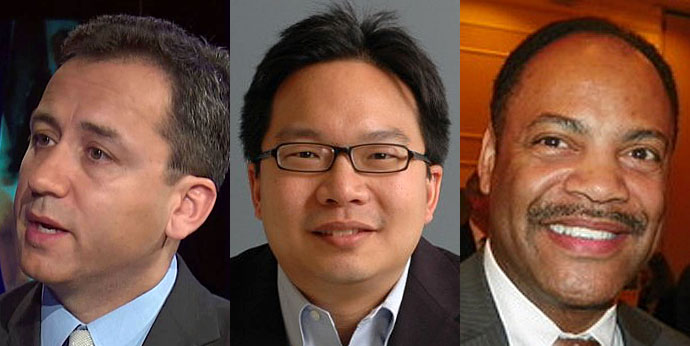 Superintendent decision possible in days for three finalists with many similarities

The three finalists for district superintendent were introduced to the public Thursday and faced School Committee questions during public interviews Friday.

Candidates Sergio Paez, Kenneth Salim and Stacy Scott have also spent dozens of hours since the announcement of their names on Tuesday touring Cambridge schools, ayereeting with principals and other staff, and having meals with groups of two or three committee members.

The next step is the committee’s critical job of due diligence – conducting site visits, interviewing current and former colleagues of the candidates, and examining related data. Committee members will reconvene to decide on the preferred candidate “probably in about a week,” Mayor David Maher said Friday.

The three men have many similarities. They seemed comfortable and relatively relaxed as they faced dozens of questions in the public meeting and committee interviews. Each referred to their childhoods as non-white, low-income students trying to navigate the U.S. education system with their families as fundamental elements in their commitment to working in diverse, urban communities. Paez “came to this country with nothing” from Colombia, he said, and his career includes focus on English-language learners, bilingual education and encouraging early education. Salim’s parents emigrated from Indonesia, lived in publicly subsidized housing and had difficulty navigating the system. Scott was raised, he said, in a single-parent welfare family in Boston. Each eventually studied education at Harvard University, among other schools.

Each has had varied teaching and leadership experience in urban areas. Paez, originally an elementary bilingual teacher, has worked in Leominster, Worcester and Holyoke. Salim, currently Weymouth superintendent, was a science teacher in Brighton and has worked for many years in the Boston school system. Scott is superintendent of Framingham, has worked in Montgomery County, Md., was a math and Spanish teacher and a child therapist, and has written and researched on public education equity issues.

All candidates stressed the need for superintendents to provide education leadership and even mentorship for principals; building strong relationships between the committee and staff union; creating long-term planning documents and structures; using evaluations of teachers and principals in a more supportive rather than a punitive way; the importance of creating clear, “aligned” curriculum expectations across schools; and building strong partnerships with local businesses and universities. They each pointed to work on state-level committees and initiatives.

Each also has experience developing and implementing programs to improve teaching staff diversity and explicitly values a diverse staff for providing important role models to students.

They also espoused inclusion of students with disabilities in the general population as beneficial to everyone, and pointed to examples of their commitments in their districts. They all talked about the need to expand community engagement beyond traditional methods – by going to people where they live. And they all stressed the moral imperative for schools to develop connections to families before kindergarten to develop literacy skills.

“I’ve been telling the [state education] commissioner for years,” Paez told community members Thursday, “we have to define what urban education is.” In a city with economically, culturally and educationally diverse families it’s a different model than in the suburbs, he said. “My job is to keep in front of us that even if the parent doesn’t show up, we have a higher ethical responsibility to do the best for that child.”

For him, that means emphasis on reaching out to district families at the birth of their children with books and information, creating “innovative” academic programs for English-language learners and offering world language or bilingual education for all students. He lists advocacy for vocational and technical programs as well as gifted and talented programs and interventions for students with disabilities among his experience.

Paez also stressed that initiatives in schools need to be given time to work. “Every program needs about five years before you can decide” whether to continue or eliminate it. “Bombarding teachers with new programs is not a good idea … I will not be following an adventure. I will not experiment with kids. We know what needs to be done for education,” he said. Any initiative, he said, has to go through “a process [that is] very well done to have validity.”

Maher asked Paez to explain his experience at the Holyoke schools, where he was made superintendent in 2013, and which went into receivership this summer. Holyoke is one of the poorest-performing schools in the state, according to MCAS standardized test scores. Paez took the job on to try to turn it around and had to cut $4.5 million from an already low budget, he said, while also improving performance. He felt that in his two years he was able to make good progress. Two schools had already been handed over to private organizations, and he said that the public schools significantly outperformed the private ones – with the private schools going down in scores while the public schools “showed double-digit growth.” Unfortunately, he said, State Commissioner Mitchell Chester was unwilling to let the city delay receivership, despite Paez’s decision to side with the local school committee to fight the transfer. “I would not go against the school committee to preserve my job,” he said. He felt that “public schools belong to the public.” He has continued to act as a consultant to Holyoke.

Paez hopes to help Cambridge “become the No. 1 urban district in the country.” He sees his role as being an educational leader and mentor to the principals and staff. But “autonomy of every school is very important to me. I’m not a top-down person, [Cambridge has] very successful schools here, but I would love to empower schools to do better.”

“I believe [Cambridge] can become a national model for closing achievement and opportunity gaps,” Salim said. Like Paez, he is committed to improving access for all children to a rigorous curriculum.

Salim stressed the importance of creating clear strategies, systems and goals at all levels of the district. In Weymouth, for example, the district developed a strategy that identified three “levers”: instruction-based learning; use of data; and family engagement. “Everything we do is organized around those three areas.”

Asked about achievement gaps in the committee interview, Salim said “opportunity gaps are one of the major causes of achievement gaps.” In Weymouth, he said, while scores are below those of Cambridge, English-language learners’ scores and students with disabilities are improving faster than the general population, meaning the gap is narrowing.

But Salim also focuses on access to and achievement in advanced placement classes. During his tenure at Weymouth, “we’ve nearly doubled the number of students who have ‘qualified’ AP scores or higher,” he said.

Salim also talked about social emotional learning as something key to all levels of education and, like Paez and Scott, sees it as something that is not an “extra” program or training, but a critical part of what every teacher and staff member does. Salim also sees that higher-achieving students need social emotional support, referring to one of his “best, most successful students” as being stunned and unprepared for going to college and failing her first college exam.

Asked by committee member Patty Nolan about the balance between accountability and autonomy of individual schools, Salim said, “a rigorous evaluation system is important in holding people accountable,” but is also “brokering development and supporting them to be better.” He wants to build a “baseline of opportunities for students” across all schools, he said, which allows “within that framework opportunities for creative autonomy.”

Salim is on the governor’s advisory committee for science, technology, engineering and math issues, and is clearly a science and technology enthusiast. He envisions creating strong partnerships with the many businesses and universities in the area, not only to create opportunities for students to have real-world understanding about careers, but also for teachers to learn more. He advocates “teacher externships” to learn and bring back “what the world looks like outside the classroom.”

Scott sees the superintendent’s job as including being mentors to the principals. He talked about having his hand in all levels of strategic planning in the Framingham schools – from creating district and school-based strategic plans, the budget process, even developing differentiated instruction skills. Like the others, he emphasized the role of evaluating staff as being more about developing support and understanding rather than being punitive. He strongly feels that teacher evaluations need to be separated from high-stakes test scores.

He pointed to many levels of Framingham’s strategic planning that he feels are very successful, and often spoke of creating systems that guide all levels of education administration. “Organizational quality that produced strong customer service and satisfaction has been central requiring updating almost all existing systems,” he wrote in his Cambridge statement of interest.

Referring often to principals as “the CEO of their building,” Scott seemed to share the other candidates’ sense of the tricky balance between school autonomy and creating rigorous, “aligned” curriculum and expectations. In Framingham, within his intensive development of short- and long-range strategic plans, however, one school has created an elementary International Baccalaureate program; bilingual schools have developed, supported through high school; and a science, technology, engineering, arts and math elementary school has been established.

While in Framingham, Scott has also moved the city toward inclusive education for bilingual, special education and gifted students. Scott also managed to expand a broken arts program within strict budget constraints and said he now has a thriving “award-winning” program in each of the middle schools.

Scott has built a strong partnership with Olin College and is developing “maker spaces” in schools. He particularly looks forward, he said, to working with Cambridge-based firms and universities. Similar to Salim, he advocates developing a “sabbatical experience” for teachers to work in their fields.

A child psychologist, he has done much research on achievement gaps and has written a book on it. He touted his experience in improving school performance and in creating alternative assessments. The MCAS data for Framingham, though, are less clear. There is some evidence of narrowing gaps in English-language arts scores for some grades, although math scores are still lagging and third-grade literacy rates, while showing progress for low-performing groups, still have persistent gaps.

Scott’s vision is to make Cambridge “a national demonstration site for project-based learning as a mechanism for creating an alternative to high-stakes tests,” he said at the community meeting. He said he has already talked with Google about a project that would compare the predictive results of high-stakes tests to a new model of assessment developed by educators on the ground.

This week, committee members, administration staff and Hazard, Young, Attea & Associates, the firm hired to manage the search process, have perhaps their biggest challenge: to get an accurate sounding on each of these candidates, determine which will be named their final choice and successfully negotiate a contract. The committee has the option of selecting none of the candidates and re-opening a search. In theory, this is a possibility especially because, resisting the firm’s original advice, the committee chose to launch a search early in the year. But those close to the process say that in all likelihood one of these three men will be named by the end of the week.