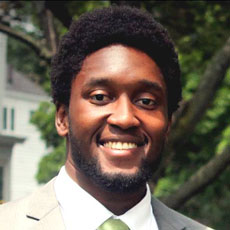 After Waite’s family immigrated from Jamaica when he was a child, he grew up in public housing and attended Cambridge Public Schools. As a student at the University of Pennsylvania, he worked on building community through the creation of a hands-on science, technology, engineering arts and and math program with the National Society of Black Engineers, for which he is now the technology outreach community help committee director of partnerships and resources. He graduated with a dual major resulting in a degree in mechanical engineering and electrical engineering and developed a body of work centering around mechatronics and robotics before founded Nananke, a community-centric tech company. He is a member of several community groups.

Waite is running with the Slate for Cambridge with councillor Nadeem Mazen, council candidate Mariko Davidson and and School Committee candidate Jake Crutchfield.

Community, including economic empowerment that increases the strength of our local economy through entrepreneurship and smart systemwide guidance.

Social equity, including better long-term planning around development and housing as well as working with local universities to house a larger proportion of their graduate students.

As a member of the Slate for Cambridge with councillor Nadeem Mazen and council candidate Mariko Davidson, Waite has agreed to promote himself for a No. 2 or 3 vote, and he is worthy of that at the least: He’s a progressive, youthful voice who reflects not just the diversity of the city but is its model for the future – a graduate and entrepreneur in the fields of science, technology, engineering arts and math.

Like his slate running mate Davidson, Waite supports a directly regional approach to housing and linkage fees that would include discussion with Somerville and Boston to help raise a developer “linkage” fee that helps build affordable housing to about twice what the council recently approved.

Waite is on the quiet side as a candidate, tending not to speak in sound bites, but he is resolved. He wants the city’s universities offering 100 percent of their graduate students below-market rates on housing, which can keep rents lower for non-students, and he wants corporate-style donations out of political campaigns. “It corrodes the democratic process,” he says.