It’s time for someone to say ‘Not now, deer’ 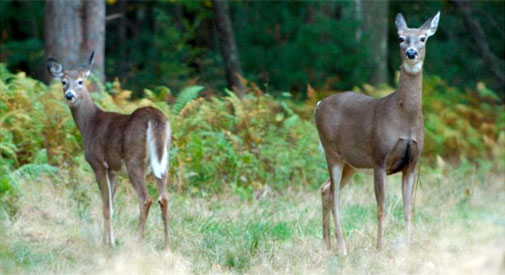 It’s time for someone to say ‘Not now, deer’

Last month the state announced it will be conducting and organizing a hunt for deer in the Blue Hills Reservation in Quincy. An animal-rights group has suggested this is cruel, and the state needs to come up with a better idea to thin out the herd. I just heard the news that this group wants to try using contraception on the deer population first.

Well, I’m kind of concerned that anyone trying to put a condom on a deer could be hurt. Deer and wild animals can be very dangerous, and anyone approaching them with a box of condoms or something similar is looking for trouble. I think this is foolish – next thing, they will want to give cigarettes to the deer after sex.

Frank Pasquarello was a police officer for 33 years, serving as president of Cambridge’s Police Patrol Officers’ Association and then as the Cambridge Police Department public information officer from 1993 to his retirement in 2010. This piece is adopted from opinions and “Thoughts while shaving” that he posts on Facebook.