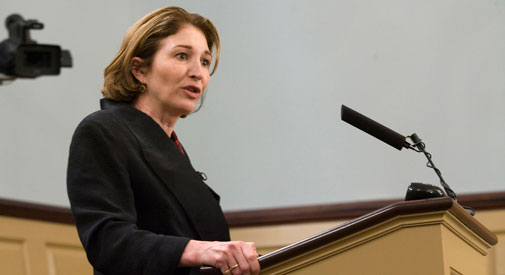 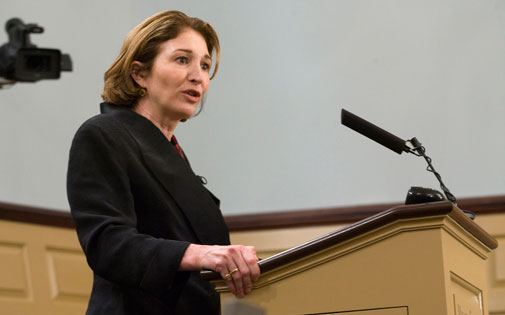 “There is deep discrimination against caregiving,” said Slaughter, president and chief executive of the New America Foundation think tank. “If you stop being a journalist or a lawyer and become a full-time caregiver, you are not valued.”

Slaughter rose to national prominence after her 2012 Atlantic essay “Why Women Can’t Have it All” broadcast her struggle to juggle her positions as deputy to Secretary of State Hillary Rodham Clinton and mother to teenagers.

She fielded questions from moderator and Harvard Business School professor Robin Ely and the audience on the Cambridge leg of a tour behind “Unfinished Business: Women Men Work Family,” a book that extends her essay’s argument that female ambition cannot solve gender inequality.

“It is organizations that need to change, not women,” Slaughter said, accusing inflexible work schedules and scant family-leave policies of limiting female advancement, and arguing that worker recruitment and retention will get easier when businesses recognize that performance and caregiving are directly related.

With the example of Yahoo CEO Marissa Mayer fresh in the public consciousness, Slaughter said paid-leave policies are not enough, and that “the first thing to look for is how many members of the senior management team actually take advantage of these policies.” In contrast, Mayer promised not to let the twin girls she expected in December take her out of the office any longer than the week or two she was gone when she gave birth for the first time in 2012, and that she expected to be “working throughout.”

Yet Yahoo gives new parents eight paid weeks off, and new mothers can take up to 16.

A digital economy can accelerate workplace flexibility, Slaughter said, noting companies such as WordPress that have eliminated offices so all employees can work from home as part of a change as radical as the move from the agricultural to the industrial age.

But families also have to see breadwinning and caregiving as equally important, which starts with finding value in humans beyond financial status. “The first five years of life is when children’s brains are being shaped,” Slaughter said. “I’m not sure there’s any work more important than that.”

Slaughter disputed the notion that men prefer breadwinning over caregiving, citing a Bain & Co. study of MBA students and graduates that found 50 percent of men expect to prioritize non-work commitments over career progress. 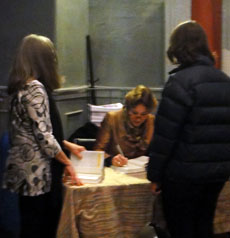 Slaughter signs copies of her book after speaking at The Brattle Theatre in Harvard Square. (Photo: Sarah Kwon)

“A lot of men wrote to me and said they would rather spend more time with their kids than stay at the office late every night,” Slaughter said, but society’s definition of masculinity discourages men from verbalizing these desires.

There being a few “secure and confident” men challenging the status quo, she said – including the few men among 200 attendees who raised their hands when moderator Ely asked how many men were present.

“As long as we treat this as a women’s issue, we’re just reinforcing the idea that care is something women are supposed to do,” Slaughter said in an interview. She suggested engaging men “by talking about how working the way we do is not sustainable.”

Her plea did not fall on deaf ears.

“Shifting the consciousness of men could be a very powerful way to advance women,” said Abdulaziz Said, one of the several male attendees present.

Slaughter saw cause for optimism.

“Growing up, I knew only one woman lawyer,” Slaughter said. “When John Kerry was nominated for secretary of state after Hillary Clinton and Condoleezza Rice, my son said, ‘You mean a man can be secretary of state?’”