‘Anomalisa’: Script, animation are genius, highlighting that our hero is only human 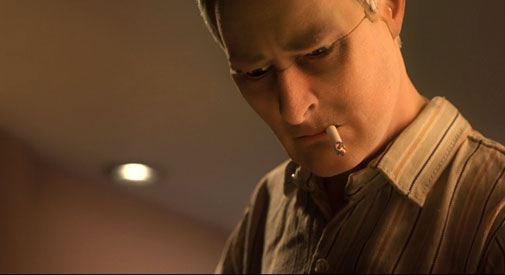 ‘Anomalisa’: Script, animation are genius, highlighting that our hero is only human

Charlie Kaufman, the meta mind behind “Being John Malkovich,” “Adaptation” and “Eternal Sunshine of the Spotless Mind,” has always been something of an art house anomaly, delivering quirky curios that sate highbrows’ quest for something different and challenging. His latest, “Anomalisa,” certainly fills the bill. It’s a stop-motion animation journey into the psyche of self-centered motivational speaker who may or may not suffer some form of psychosis. It’s slow-moving and mundane while being profoundly unearthly, plumbing the human condition and the eternal quest for fulfillment. 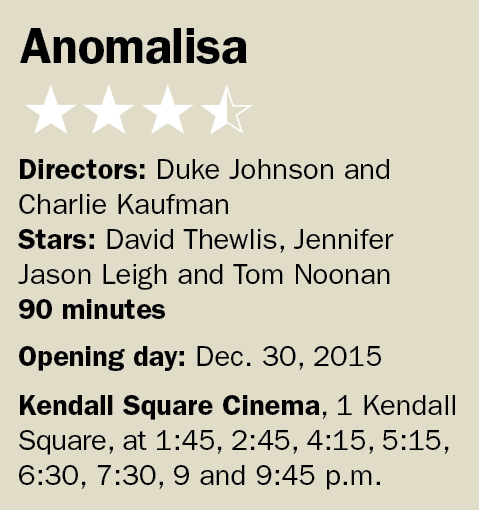 The project, which Kaufman originally conceived as a sound play (think a podcast or radio) for composer Carter Burwell and the Coen brothers, came to life via a Kickstarter campaign and a partnership with animator Duke Johnson, a Kaufman admirer with such credits as “Mary Shelley’s Frankenhole” on his CV. The rendering of place and people (the puppets were made in part from a 3-D printer) are astonishing in the degree of detail and craftsmanship, especially the miniature sets, which are limited to the inside of a hotel, an airplane, a cab and a dildo bodega. The overall effect is something like “The Polar Express” meets “Team America: World Police.”

The cast too is limited – just three performers. David Thewlis and Jennifer Jason Leigh (having a breakout resurgence with this and “The Hateful Eight”) voice the leads, while character actor Tom Noonan speaks for everyone else – women, men and children. It’s a strange olio shoehorned into a rather regular tread as Michael Stone (Thewlis), a customer service expert, British ex-pat and something of a minor celeb (author of “How May I Help You Help Them?”), flies into Cincinnati to give one of his speeches at a convention. Everything is a bit off as Michael lands. The male singers behind the choral music on his iPod are horribly out of sync, everyone speaks with the same voice (Noonan’s) and has the same general facial profile regardless of age, gender or physical size. And when he gets in a cab desperate for a cigarette, there’s a “no smoking” sign because the driver is asthmatic.

Everything moves in small, sleepy slices like that, but the film remains rife with tension – mostly between Michael’s ears. The name of the hotel that Michael checks into, The Fregoli, is a tell, and early on we learn Michael has an angry ex-lover, a wife and child back home in L.A. from whom he seems detached and a high opinion of himself. Besides observing a man masturbating in an office across the way and an ill-advised drink with an old flame, nothing really extraordinary happens – except, of course, that everyone has that same generic mug – until Michael meets the object of the film’s title. Lisa (Leigh) and her travel mate are customer service reps there for the speech and in awe of Michael. Given Michael’s aloof demeanor, it seems improbable that a nervous yet chatty wallflower such as Lisa would draw his attention, but from his unfulfilling relationships with the other women in his life and Thewlis’ deft emotive inflections, there’s a clear loneliness present under Michael’s hypercritical voice; in a later scene, after Michael declares Lisa his “Anomalisa” (anomaly + Lisa, get it?), he abruptly derides her for clanking her teeth on her fork while she eats, among with other control-freakish nits. If Michael weren’t so flawed or didn’t have small moments of empathy, he might just come off as a bloviating philanderer leveraging his station in life. But Kaufman clearly loves the troubled transplant, which he develops with care and nuance, and like Lisa and the rest we’re drawn in to Michael, with the unpleasant nuggets of reality lurking for when the swoon wears off.

The strange, pedantic tenor of “Anomalisa” works to its credit, becoming hypnotic and intoxicating in the same fashion as Richard Linklater’s slacker redux, “Waking Life.” The blurred lines between reality and delusion and the dicey credibility of Michael’s POV offer rewards, as does the animation’s overall orchestration – which is nothing short of genius, though you’re likely to get pulled from the story wondering just how they got the thing to line up together so seamlessly on film. The other great treat besides Thewlis, who embodies the heart and soul of his flawed protagonist, is Leigh. A light comes on when Lisa enters, vulnerable, naive and unrestrained, blurting out whatever is on her mind with sweet sheepish sincerity, even when coaching Michael on the correct oral celerity during cunnilingus. Like much of the film, it’s a tender and telling scene, tinged with awkward human fragility. “Anomalisa” will certainly not be to everyone’s taste, but it is a trove of complex reflections delicately interwoven, and masterful puppetry. Wondrous and eerily somber, Kaufman’s latest quirk offers much for curious minds.