‘Everybody Wants Some!!’ goes back to ’80s to remind they weren’t quite as good as ’70s 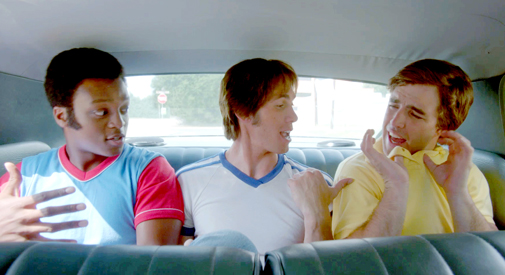 ‘Everybody Wants Some!!’ goes back to ’80s to remind they weren’t quite as good as ’70s

If there’s one thing about Richard Linklater, it’s that he’s true to his roots – everything Austin and sleepy suburb, and everything indie. He served notice with “Slacker” back in 1991, and while that movie looked to be a one-hit Sundance wonder, Linklater came back with the uproarious “Dazed and Confused” – which gave the world Matthew McConaughey and Ben Affleck – and “Before Sunrise.” The latter spawned two more chapters (“Before Sunset” and “Before Midnight”) with the same actors across 20 years, and more recently his commitment to the slow-burn project was further embossed with the wildly acclaimed dissertation on home life, “Boyhood,” which took some dozen years of filming to compile in real time. 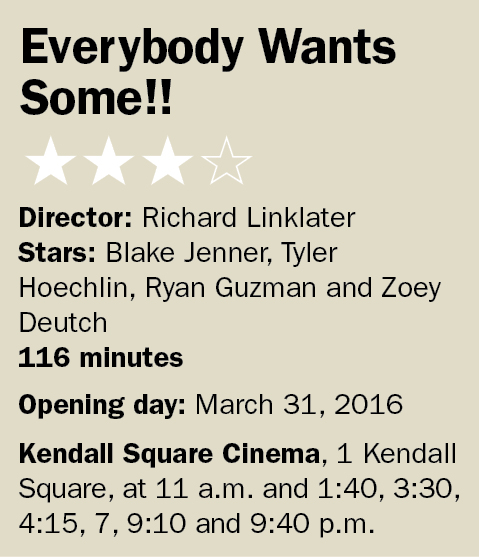 In short, the Austin auteur’s committed. He’s revisited and re-envisioned and does so again here in “Everybody Wants Some!!” with what’s tagged as a “spiritual sequel” to “Dazed and Confused,” and while that may seem a stretch given that the film centers on a collegiate frat house of baseball players at a fictitious Southeast Texas university in the 1980s, it’s right in the strike zone in temperament and scope of subtle social criticism with a healthy dose of humorous, cutting snark.

Like “Dazed and Confused,” the underrated “Go” and George Lucas’ “American Graffiti,” “Everybody Wants Some” takes place over a day or two that drops characters into escalating situations with revelation and epiphany ripening on the other side of the rise. It’s the first day of school for frosh fastballer Jake (Blake Jenner from “Glee”). Upon arriving at the STU baseball house he encounters a rich potpourri of personality: the buff stud hitter (Tyler Hoechlin), the philosophical stoner (Wyatt Russell), the arrogant braggart full of delusion and poor social skills (Jason Street, looking somewhat like Weird Al on steroids) and the resident pickup artist (a charmingly smarmy Glen Powell). Chest beating, bar hopping and sexual pursuits ensue, with the discernible endpoint being the team’s first practice Sunday afternoon, if the ballers can even get out of bed with the two-day hangover they’re packing on.

Given this is a movie about baseball, there’s little diamond play. Instead we get the boys trying to steal third and home with nubile and willing coeds. Because this is a Linklater film, sex is about as overt as the casual, circuitous banter that titillates the viewer in slow, sleepy strokes of reveal and social insight. As we’re told, STU is a national powerhouse and some on the squad have a legitimate shot at going pro – but only a select few, and the odds are stacked against them. Beyond sex, “Everybody Wants Some!!” isn’t about making it, but about the struggle and the path to identity and finding oneself at a defining point. From over in left field you can hear a didactic, “It’s not whether you win or lose, it’s how you play the game.”

Even notching a score becomes more than just rote conquest. Jake, while he roams with the guys from disco bar to urban cowboy rodeo, with some near-naked “Twister” and mud wrestling in between, harbors a simmering romantic yen for Beverly (Zoe Deutch, Lea Thompson’s daughter) a drama student with shutdown skills. Their courtship is amiable, long developing and veers into “Before” series territory with an obligatory all-night talkie. Alas, they’re no Jesse and Celine.

For that matter, despite its “spiritual sequel” tag, “Everybody Wants Some!!” is no “Dazed and Confused.” It’s a funny, telling sojourn through the corridors of education, but it lacks the prequel film’s sense of genuine insight. One can’t help but wonder if the burden of baseball as a plot and thematic device becomes too unwieldy for Linklater to root in his usual quirk. These larger observations, however, only apply in retrospect; the time-capsule elements of Blondie, Boston (the band), the blowdried feathered hair and Burt Reynolds mustaches, as well as the classic and tragic auto designs of the period, power along the director’s nostalgic rewind with a cheesy sardonic accent much the way Paul Thomas Anderson did with “Boogie Nights.”

The cast of slightly known actors also works to the film’s favor. All play their part on the well-balanced roster. Jenner may be the lead, but his affable, good-looking up-and-comer generally just allows the chorus of Adonis upperclassmen to strut their stuff. Powell’s sensitive yet determined ladykiller and Russell’s stoner meditations on Carl Sagan and Kerouac are the palpable yin and yang at the fore of the merry court jesters of the diamond, though Street’s angry hurler seems something more of a caricature from “The Benchwarmers.” He’s a great foil and lightning rod, but we never get under the hood of what drives such mania.

Fans of Linklater, especially those of “Daze and Confused,” will be in their zone. The director doesn’t quite hit it out of the park, but he scores.