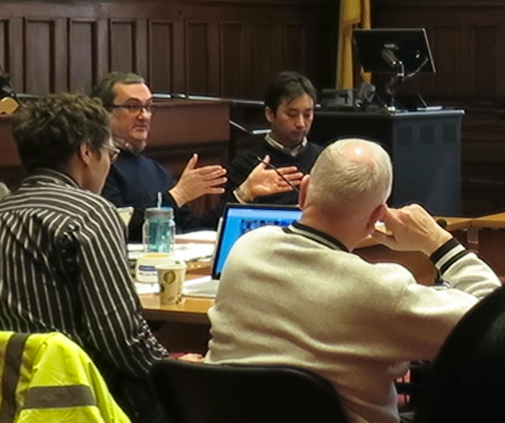 The City Council approved a 13-step timeline in the search for a new city manager Wednesday at a meeting of its Government Operations committee; councillors aim to vote on the final selection for a new manager at a public meeting Sept 26. The committee also approved the first step in seeking an executive recruitment consultant firm, as well as the format of a committee that would choose it.

This reporter has posted a recording of the meeting to YouTube.

The timeline and search firm Request For Proposals,  which were not circulated in advance of the meeting to the council or the public, were approved on a unanimous voice vote before public comment. The council normally hears from the public before voting.

Councillor David Maher chaired the meeting, with all councillors present except Mayor E. Denise Simmons. Because Government Operations is a committee of five councillors only – Maher, Leland Cheung, Nadeem Mazen, Marc McGovern and Tim Toomey – the others were not permitted to vote. But councillors Dennis Carlone, Jan Devereux and Craig Kelley participated in the debate and discussion.

City Manager Richard C. Rossi announced in mid-March his plans to retire this summer. He had been deputy city manager since 1981 under City Manager Robert W. Healy, and was given a three-year contract beginning when Healy retired in 2013 after 32 years overseeing Cambridge’s government operations. Rossi had also served as purchasing agent, acting commissioner of Public Works and acting director of the Water Department as well as the years as deputy city manager, and his departure means the imminent loss of significant institutional knowledge for the city – as well as seeming to leave a months-long gap before a potentially brand-new manager arrives.

But Maher announced he had held “fairly lengthy conversations” with Rossi, who “expressed a willingness” to contract for an additional three months, delaying his departure to Sept. 30 from June 30. “We will be bringing forth a subsequent three-month contract after negotiating with him,” Maher said.

“I think that alleviates a little bit of the pressure that we feel with the timeline,” Maher said.

Maher presented a proposed timeline for the search process, which he estimated might cost $100,000. While he has said repeatedly there is no template for this search process, he also intends to crib heavily from the most recent school superintendent search, he said.

April: The city will issue an RFP to find a recruitment consultant to run the city manager search. Purchasing Agent Amy Witts said she intended to issue it April 14, with responses due May 5.

May: The evaluation committee will choose a search firm, subject to the city manager’s approval.

June: Once selected, the search firm is expected to conduct 20 to 30 focus groups, including constituencies such as affordable-housing advocates, people in the arts community and bicycle and pedestrian groups, Maher said. There was some uncertainty among councillors as to whether that number of focus groups was feasible within one month, or whether Maher’s number was overambitious.

July: Using input from the focus groups as well as one-on-one meetings with councillors and key staff, the search firm will develop a “leadership profile” to help select and screen candidates.

July to August: The search firm will recruit candidates for the city manager position.

August: A 15- to 18-member preliminary screening committee will be selected to narrow the list to three final candidates. Maher said he had been advised that 12 members was the upper limit of practical, but said he would go higher to be inclusive. By law the committee can contain no more than four councillors.

July to August: The search firm will recommend up to eight candidates to the preliminary screening committee, which will review them confidentially.

August to Sept. 9: The preliminary screening committee will conduct “confidential off-site interviews” with candidates and narrow them to a final three choices.

Sept. 5-11: Public “town hall” meetings with all three finalists will be held, with feedback to the City Council.

Sept. 19-25: The council will interview the three finalists in a televised public meeting.

Sept. 19-26: The council may conduct site visits to the workplaces of the three finalists.

Sept. 26: Councillors will vote their choice for city manager at a televised public meeting.

Role of the council

Much of the council discussion surrounded its own role in the process and the limitations on their participation before the final stages because of the state’s Open Meeting Law.

Maher and City Solicitor Nancy Glowa explained that because most candidates would expect their names to be kept confidential until the finalist stage, it would not be possible for more than four councillors to participate in any of the earlier stages of the process without an open meeting – and an open meeting would not be able to discuss candidates confidentially. Discussion of candidates is not a permissible use of closed-door sessions under the law.

Four councillors can be on the preliminary screening committee that selects the three finalists from the nine candidates in September.

And four councillors, potentially different ones, can also be on the evaluation committee that selects the search consultant firm in May.

Carlone asked that the councillors on the evaluation committee be different from the four on the screening committee.

Maher’s reply: “I pledge you will be treated fairly.”

Mazen tried to propose mechanisms to get around Open Meeting Law requirements, such as discussing redacted versions of the candidates’ résumés in open session and having multiple preliminary screening committees. But while Glowa said she would research those options, it did not sound like they would pass legal and practical muster.

During public comment, local politics watcher Robert Winters emphasized that selection of a city manager is the council’s most important job, and “five votes out of nine is what decides.” Winters said he appreciated the council seeking public input, but ultimately it wasn’t an open process: “We elected you folks to do it … just do it.”

Michael Brandon, of North Cambridge, raised several issues of transparency, openness and process. Brandon asked when the councillors had received the draft timeline and RFP approved during the meeting, and Maher replied that the council got them at the beginning of the meeting. “Apparently they digested, better than I could, a detailed RFP, draft timeline?” Brandon said, referring to the relatively short 90 minutes that had passed. “I guess that’s part of the reason there’s a sense of skepticism among many members of the public about how open this process really can be.”

Brandon also suggested that the entire membership of the council be able to vote on such process decisions, rather than only members of the five-person Government Operations committee. He highlighted the decision to extend Rossi’s contract by three months as one that had occurred seemingly outside the council or committee process.

Brandon also asked for future meetings about the manager selection to be televised and recorded by the city, echoing a request made by Devereux during the meeting.