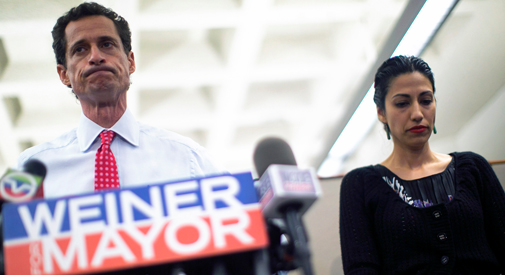 If you ever watched the riveting behind-the-scenes documentary “The War Room,” you’ve already seen a man snared by scandal mid-campaign. The speed bump Gennifer Flowers dealt Bill Clinton en route to a landslide victory in 1992, however, pales in comparison with the 20-car pileup Anthony Weiner is responsible for in “Weiner,” a beguiling look into the paradoxical and self-destructive nature of a man who, while earnest in his desire to serve the public, remains unable to shake a sex-trolling persona infamously known as Carlos Danger. 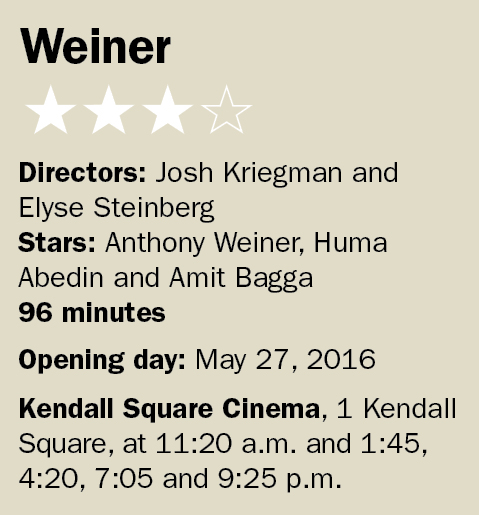 The filmmakers, Josh Kriegman and Elyse Steinberg, must have thought they had a lock on a picture of redemption, with a congressman felled by scandal looking to come back as mayor of New York. Given what’s on the film, Weiner sounds the part, talking charismatically about the quality of education and the ability to earn a wage equal to living in New York. It doesn’t hurt that the seemingly resurgent pol has a wife who’s a senior aide to Hillary Clinton ramping up her political machine for a 2016 presidential run.

On paper, the story could not be better. The narrative about making mistakes and overcoming those flaws was universal and cathartic. Win or lose, Weiner was going to get a second chance as Kriegman and Steinberg embedded for a campaign that showed early signs of promise. But then a substantial bag of shit hit the fan, and what the film became is something darker and more alluring than what the filmmakers could have imagined. The problem had a name: Sydney Leathers, a comely 20-something who reached out to Weiner on Facebook to commiserate about his travails and support his resurgence. Shortly thereafter they’re sexting and there’s dick shots and phone sex.

What’s telling in the film is Weiner’s contrite manner: “I did things” and “That’s between me and my wife,” he says to whoever is pressing him, as if that’s good enough to move onto campaign matters. Weiner gets an A-plus for his resolute manner, which is what we see. What we don’t see is any timeline of the Leathers (and other) incidents, or an explanation as to why, or how, with such a rigorous campaign and infant child in his life, Weiner is able to muster the time for such ditherings. Leathers, for that matter, and for better or worse, rides her 15 minutes of fame for all it’s worth, partnering with Howard Stern and even showing up at Weiner’s concession rally.

At the sad epicenter of all this remains a nearly silent Huma Abedin, the wife often caught on camera looking distraught, but rarely speaking. At the time the film was shot (2013), their marriage was only three years old, they bore a child and in the first scandal, lost the prospect of becoming a nationally known political power couple. As the film goes on, Abedin, once standing stout by Weiner’s side as Hillary Clinton did in “The War Room,” begins to withdraw both in her public support of Weiner and from the documentarians’ lenses. The real kicker is the indirect pressure Clinton asserts on her protégée (for whom she floats the tag “like a daughter”) urging Abedin to take action, with a clear lean toward cutting ties.

The jarring missed opportunities here: Kriegman and Steinberg never effectively cut into the Carlos Danger side of Weiner; nor do they get Leathers or any other outside opinion to shed light on it. By the end, you get a sense Weiner has some degree of control over where the filmmakers might go. Watching the film I often thought, given as bad I recalled the scandal – and it looks even worse in this rewind – why Weiner didn’t kill the film, let alone his ill-fated campaign? The truth of the matter is that Weiner’s no-quit attitude becomes something to admire, no matter how smug, arrogant and deflecting he may be. The real losers are Abedin and Clinton, and 10 years down the road, Leathers. Abedin is still with Weiner. Leathers has gone on to make porn and trigger another D.C. pol to fall. For any people who wonder just how hard it it to maintain a secret identity like Batman or Superman, Kriegman and Steinberg give half the story, and it’s an unshakeable one.