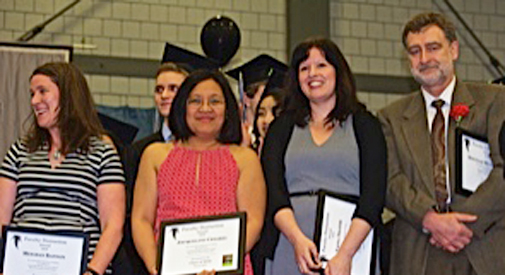 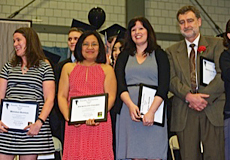 From the Friends of CRLS, July 5, 2016: The Cambridge Rindge and Latin School Field House rocked during June 9 graduation ceremonies to cheers and yelps as Faculty Distinction awardees were announced by principal Damon Smith. Meighan Bannon, Jacqueline Cesario, Doug McGlathery and Tanya Trayer got Faculty Distinction Awards, sponsored by the Friends of Cambridge Rindge and Latin School and presented by Smith and FoCRLS executive director Elaine Schear. Honorees were nominated by the Class of 2016 to recognize teachers and staff members who have made the greatest impact during their time at the high school.

Meighan Bannon of the English Language Arts department is described by her students as a teacher who helps them grow, is always willing to help them, and makes them love school. Said one student of Bannon: “She has been there since the start and she has just encouraged me so that I can achieve anything I plan to do.  I have created a bond with her that I will never forget.”

Jacqueline Cesario has been a Social Studies teacher at the high school for 15 years. She started teaching Constitutional Law in 2010 as part of the Marshall Brennan Constitutional Literacy Program; since then the school has consistently seen students advance to the national competition in Washington, D.C. Cesario is a longtime senior class adviser and student government co-adviser.

Doug McGlathery has been a computer science and math teacher at the high school since 1980. He studied architecture at the Massachusetts Institute of Technology, where he was inspired by MIT-Wellesley Upward Bound program to become a teacher. He also holds a graduate degree from Harvard. McGlathery called the high school a special community where he feels “very lucky” to teach among “amazing colleagues” and to help “incredible students” pursue their happiness.

Tanya Trayer holds bachelor’s and master’s degrees in English from Simmons College and has been teaching at the high school since 2007. She teaches English and gender theory and is co-adviser of P-10, the high school’s Gay Straight Alliance. Trayer, who previously worked for seven years as a teacher and counselor for Cambridge Housing Authority’s Work Force Program, is seen as deeply committed to gender, racial and economic equality.

The Faculty Distinction Awards program is one of six provided to the high school students and faculty by FoCRLS. For information about donating to or volunteering at the nonprofit, call (857) 235-9290.