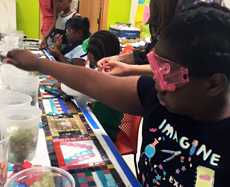 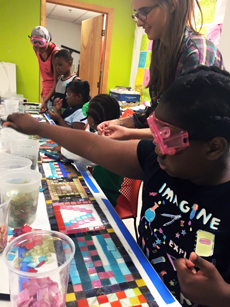 Students and aides make tile mosaics in June at the Community Art Center in the Area IV/Port neighborhood.

The Cambridge Housing Authority is giving $450,000 to one community program and free space to another inside a health clinic on Windsor Street near two public housing developments.

The $450,000 is going to the Community Art Center, which serves children and teenagers, most of them in and around the developments, but is open to any city resident. The rent-free space will be used for a new preschool program to be run by the city, with priority for up to half the 34 spaces going to children living in public housing.

The building at 119 Windsor St. is owned by the city and houses several programs besides the art center and planned preschool, including a Cambridge Health Alliance community health center and the city’s Public Health Department. The Alliance operates the department.

The Community Art Center has a close relationship to the Housing Authority. The center was founded by parents in 1932 and began operating in a Harvard University building. In 1938, it moved into a basement space at the Newtowne Court public housing development and was the community center for Newtowne Court, and later, the neighboring Washington Elms development. The center has been housed at the Windsor Street clinic since 1999 and rents the space from the Authority.

The center describes its mission as helping youth transform their lives and their neighborhoods through art. It operates a child care program for schoolchildren from 5 to 12 years old, involving visual arts, media, dance and theater; it recently started a music program for school-age children. It also runs several art programs for teenagers, including a film festival presenting movies and videos made by teenagers across the nation. Teens at the center have produced several neighborhood murals and are working on a collection of stories of people living in Area IV/The Port, the neighborhood that houses the Newtowne Court and Washington Elms developments.

The $450,000 contribution from the agency will supplement a $750,000 state grant to renovate the space, including upgrading the lobby entrance, the kitchens and bathrooms, classrooms, lighting, and cooling and heating system. The local agency’s money will pay for improvements to the kitchen, toilets and cooling and heating, as well as paying for maintenance fees for that system. Work is expected to begin next year.

The new preschool program will be operated by the city’s human services department, which runs others in the city. Authority commissioners approved Wednesday a three-year lease for the program, with the possibility of two one-year extensions. In return for the city agreeing to give priority to kids living in public housing for up to 17 of the 34 daycare slots, the agency won’t charge rent for at least the first three years.

In a convoluted arrangement, the city leases the building to the Cambridge Health Alliance. The Alliance subleases space to the Housing Authority; that agency rents part of the space to the Art Center and is giving another part to the city’s new preschool program. The agency’s executive director, Gregory Russ, said the space for the preschool is available because another tenant moved out.