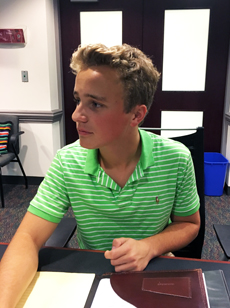 A surge in high school population is making class registration, size and access – as well as participation in sports activities – more unpredictable and stressful, the School Committee heard Tuesday.

Included in the testimony were the committee’s own student members, both attending the Cambridge Rindge and Latin School.

In the coming semester, Paul Sullivan said, he faces four academic classes, three of which are advanced placement, while this semester’s course load is much lighter. It’s a schedule imbalance faced by many juniors and seniors. “It adds to the hyper-sense of being overwhelmed,” Sullivan said. “It’s a huge issue for personal lives and emotions – it feels big. That’s been very difficult to deal with.”

“The increasing enrollment has made it a lot more difficult,” Marie Gershaw said. “It took me at least a week to meet with my guidance counselor” to make scheduling changes she knew were needed last spring but went ignored until now, while her sister, a first-year student, “had her entire schedule changed” the third week of school. (As committee member Nolan pointed out, in a block schedule where a year’s worth of work is in one semester, two or three weeks is a good chunk of time.) Gershaw also worried that the guidance counselors need more support as their workload and stress increased.

Additional testimony came from parents. Jennifer and Brad Kay-Goodwin, parents of a first-year student, voiced concern in public comment that in addition to concerns about access to academic classes, they said, “I hear that a lot of coaches are surprised by the numbers who try out for their sport. Will everyone be allowed to play sports?” Jennifer Kay-Goodwin asked, wondering if there was planning for less-competitive intramural programs so more students could participate. “You have to be playing since you were a little kid to be competitive enough to even try out.”

With private school students increasingly joining “because of the great reputation of the high school,” she said, how is the district is managing the spike in enrollment?

High school principal Damon Smith, acknowledged growth to about 1,900 students (a 20 percent leap from the 1,580 enrolled in 2011) and that the start of school has “had some challenges, not unlike challenges we’ve had in previous years.” Smith also referred to significant “summer enrollment.”

Popularity for certain electives and courses, particularly math classes, has strained the process, even with some additional math teachers, he said, as many first-year students are “trying to bypass Algebra I” or “double up” on math – the practice of taking a math class for each of the two semesters, which in CRLS’ block scheduling translates to two years of math in one year. Yet the ability to do so had been one of the “selling points” of the block scheduling approach, with district policy emphasizing access to algebra in middle school years, Nolan said.

“I know we have to do a better job communicating with students about what the scheduling can do,” he said, and he would also like to see more preferences met, with more schedule corrections and changes as well as new registration being done in the summer before school starts.

“Our biggest challenge is meeting requests,” Smith said, though the school meets student primary requests for classes “with 99 percent accuracy.”

That doesn’t mean that the resulting schedule is “optimal,” he said – meaning coursework may be out of sequence, or electives or advanced placement classes may be grouped into one semester for individuals. “We will be able to meet your request for classes. What we are not able to do at this point is schedule those classes in ways that you feel are the best fit for you … just yet,” he said, referring to the computer program that develops the student schedules.

“I know that there is a way to have a scheduling program do that,” Nolan said, suggesting “I bet we can get [tech companies in] Kendall Square to work on that.” She also argued that “optimal,” as Smith referred to it, may also be “educationally sound.”

The committee passed a motion asking Superintendent Kenneth Salim to include in his six-month entry plan analysis of the district’s absenteeism rates. It came originally from member Emily Dexter, who cited state data showing Cambridge to have higher than average “chronic absence rates” – under the state definition, a benchmark of 10 percent of the school year, meaning 18 days or more. “Almost 40 percent of CPS students miss 10 days or more of school,” Dexter said, explaining a motion that “urged” the administration to analyze and address the findings.

In a move reminiscent of the previous meeting, another member submitted a substitute motion intended to replace Dexter’s with essentially the same content but using different language. This time, Fantini handed out a sheet of paper with the substitute motion; last time, Kelly handed out her replacement motion asking for work on supporting early childhood education. In both cases, the substitutes were a surprise to Dexter.

This time, though, Dexter asked Fantini directly why he had offered a substitute.

“Oh. I think it’s a softer way to say it,” Fantini answered. “I was not comfortable with your tone. I think my version tells a different story than the narrative of your motion, which seemed to say that we are doing a terrible job.”

“I’m sorry you took it that way,” Dexter said.

As at the last meeting, it was Nolan who pointed out that the motions essentially ask the same thing, and thanked Dexter for raising the issue. “We need to get beyond this,” she said to her fellow members. “Let’s try to move forward as body and focus on the substance.”

Asked later if he had run the substitute past Dexter, Fantini responded: “No, I had written it up one hour prior to the meeting, and I thought that it would be considered ‘friendly.’”

Fantini’s motion passed, with Dexter voting against it.

Students using out-of-district schools and their tuition rates are still growing, Assistant Superintendent Victoria Greer reported during questions about a $6.5 million set of contracts for day and residential programs.

Much as she did last year, Greer explained that there “has been a huge uptick in the number of children who have not just mild or moderate disabilities, but multiple handicaps or significant mental health needs.” Saying administrators are still trying to understand the phenomenon better, Greer noted that it was a statewide issue, not something unique to Cambridge. She did point to the issue of attracting children with significant needs to locations that can offer quality services, as well as an increase of children in Department of Children and Families custody.

“We have to follow [the agency’s] recommendations, and we are bound by law to cost-share with them,” she said. Even if children are released from agency custody, she said, the city is required to provide continuity for children and maintain their schooling arrangement.

With this contract, the district faces a $1.6 million deficit, but it is likely to be made up with “circuit breaker” funds from the state whose amounts will be finalized in the next two weeks or so, as last year’s deficit was overcome.

Greer and Salim said there will be more information in the future for the committee about how they hope to improve their projected costs and manage the strain on the budget. The contracts were passed, with Kelly abstaining.

In other business, student member Sullivan reported that the high school’s student government voted to “focus our efforts this year on achievement gaps,” including holding a series of workshops that “will help in developing a common language, and understanding what the gap means and what kind of role we can play in it.”

Nolan moved to refer Simmons’ motion from the previous meeting about which honorifics to use in addressing committee members to the governance subcommittee. Acting chairman Fantini asked that any action wait until Simmons is in attendance, though.

Nolan calendared a motion by Fantini proposing an “Ad hoc subcommittee on goal setting,” a subcommittee he tried to establish at the end of the last meeting, perhaps without remembering that the committee needs to vote on subcommittee creations. Nolan said “it needed more discussion” than they could afford Tuesday, given that they needed to also go into a closed-door discussion to begin union contract negotiations. Fantini then calendared an “accompanying” Dexter motion suggesting work to be undertaken by this new ad hoc subcommittee.

The committee passed a motion to centralize a list of outstanding motions and requests referred to the superintendent’s office over the past year; approval of a motion related to informing city families about upcoming kindergarten and Montessori lottery ; and a $100,000 contract to City Sprouts.