Foundry redevelopment talk awaits input, but not everyone likes the proposal’s math 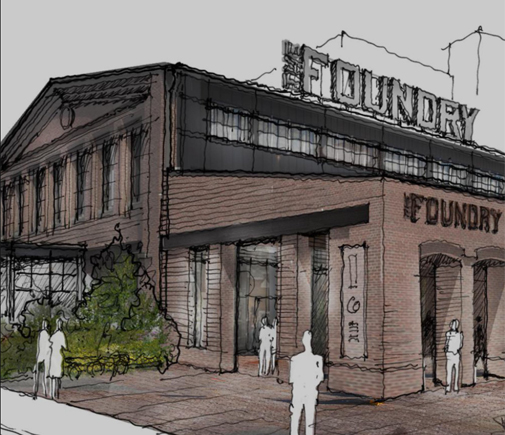 Foundry redevelopment talk awaits input, but not everyone likes the proposal’s math

The Foundry building in East Cambridge was reimagined as makerspace, co-working space and community benefits space in a proposal seen in September.

Despite dissatisfaction over the direction of redevelopment at the city’s Foundry building, and murmurs of a radical reboot for the project, further discussion of the topic was put on hold again Monday to await input from the East Cambridge Planning Team neighborhood group.

That discussion is scheduled for between 7 and 9 tonight.

Many residents and city councillors have expressed upset over how much space in the 53,000-square-foot building at 101 Rogers St. would be set aside for community uses in current plans, and the process leading to those plans, but few as much as councillor Nadeem Mazen.

The Foundry Building was given to the city by Alexandria Real Estate in February 2009 in exchange for a rezoning of land on Binney Street in Kendall Square. The deed for the Foundry was transmitted to the city in January 2012.

As part of this deal, redevelopment of the building was dedicated at least in part to community use. Community meetings and public walkthroughs of the space dating back to October 2013 elicited various suggestions for use, emphasizing space and below-market rents for artists and nonprofit ventures and projects in the areas of science, technology, engineering, the arts, and mathematics, along with workforce development in those fields.

In May 2015, the City Council set aside $6 million in funds for the redevelopment of the Foundry, though an August 2013 look into renovation costs to bring the building up to code put the price tag at $11.3 million for interior renovations alone, with additional work on the exterior raising the total to around $25 million. Some councillors hope to increase the budget for the project.

Despite support from the City Manager’s Office, the team cannot begin work until a sublease agreement is negotiated, and the council’s reaction Sept. 12 after seeing the team’s proposal was tepid at best. The key issue: the amount of space designated for community benefit.

In the proposal, the basement level is makerspace with shared equipment and an assembly hall that could be used for performances; the ground floor is a lounge, restaurant and a kitchen shared with community users, a lounge and “pods” for other uses; and the upper two floors would be co-working spaces for businesses that would be run by the CIC. There would also be garden space.

In the team’s approach, the building would be expanded to 86,936 square feet.

“The shared use of many spaces during different times and days of the week will provide the community-oriented space in the building,” the proposal said, calling it “equivalent to 16,766 square feet.”

The building’s square footage dedicated to community use is given as 19.3 percent, with discounts on or giveaways of space extended to deserving groups. But this figure is achieved by identifying the amount of time allotted to community use as though it is square footage. In one example shown at a July 21 presentation: When the 5,783-square-foot assembly hall is allowed use by the public 30 percent of the time, that’s considered equivalent to 1,735 square feet of community space.

Mazen didn’t approve of the device.

“In discussing things with the CRA and the city, I was told that they would aim for an 80 percent or 90 percent number [of community space] and that 50 percent would be the bare minimum, and that was made clear to me,” Mazen said. “The process has manifestly not reached to the minimum discussed.”

There are also concerns regarding the governance of the Foundry.“I don’t want to put in twice as much now to rent back our own space, rather than if we had given a different developer or the same developer a mandate to achieve more by putting more money on the table,” Mazen said.

Some councillors have suggested the possibility of scrapping the plans entirely, considering options ranging from soliciting alternate development proposals for the building to demolishing the structure and starting over from scratch on the parcel.

Jesse Baerkahn, president of Graffito SP, spoke at the Monday meeting during public comment to point to community support for the proposal heard July 21.

“While I respect and agree with many of you that we can do better with the Foundry, we take such sentiments not as reason to start over, but as a challenge to continue our work, collaborate more with stakeholders and engage in more community outreach,” he said.

Mazen concluded his comments with a call to take more time. “The council should take the position of spending a little bit longer and making sure we bring the community the benefit that they had asked for, the benefit that we had all agreed on, and the potential that is possible for this building,” Mazen said. “Frankly, I think that if we do it right, that everyone involved will be happier for it.”