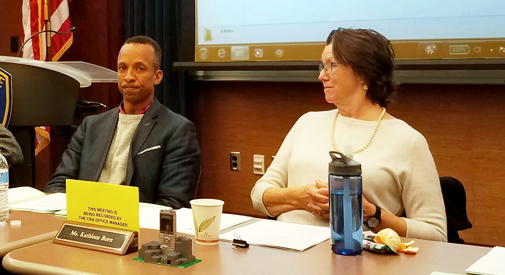 A city official was stirred by presidential election results to break the format of a standard municipal agenda Nov. 16 and offer a statement about civic engagement.

Conrad Crawford, a four-year member of the Cambridge Redevelopment Authority and its assistant treasurer, said that after the results of the Nov. 8 election were made clear – with Donald Trump becoming president-elect, promising an upheaval in thought about the role of government – he was inspired to ask his colleagues for permission to share his thoughts after a “divisive” election.

“I contribute my time serving on this board, because it’s an authentic demonstration of local control, governmental transparency and probity.

“Beyond that, our statutory authority draws from the implicit strength, sustainability and resilience of urban communities. As many folks in the room know, redevelopment authorities were created to reverse the deteriorating condition of America’s cities, and the federal role in this has declined significantly since they were created – so that today, most city planning and community investment efforts are primarily local in activity.

“Thus, what we’ve been doing over the past few years through our strategic planning process has been to work to redefine the role of a redevelopment authority in a progressive and economically healthy municipality, which is quite different than what we were doing over 60 years ago, which is dealing with blighted cities. But importantly – and I think this is a key point – this body’s operating principles exhibit an inclusive character that values diversity and honors our country’s pluralistic conditions and traditions. I’d like to emphasize that.

“All are welcome; all are listened to. And we actually enjoy these conversations.

“Last week’s election results have re-revealed that this approach to public administration has many critics – possibly due to a lack of the type of faithful public engagement we practice here in our community in Cambridge.

“So, we face challenges as a market: interest in housing and commercial development that threatens the diversity of land uses and our community’s sense of stability. These same pressures that are impacting the larger conversation at the national level are right here at home, as well.

“I think that the CRA’s support of the Kendall Square innovation district symbolizes the Cambridge community’s esteem for science and invention, and I’m proud that solutions to global issues from disease prevention to climate change mitigation are a core aspect of our city’s identity.

“Wrapping this up, I believe that we remain focused on the value of cities as centers for collaboration, intersections of cultural diversity, catalysts for economic advancement and models for sustainable development.

“I strongly believe we must remain vigilant in our efforts to continue demonstrating the civic value and virtue of the CRA’s approach, and serve as an influential example of the institutional merits of this style of government.”

There was a pause after Crawford spoke, and the people in attendance applauded.

Founded 57 years ago, the five-member, quasi-governmental authority once worked anywhere in Cambridge where land was blighted and underdeveloped, but now focuses mainly on development and management in Kendall Square. It is also working with the city on reactivating the Foundry building in East Cambridge.