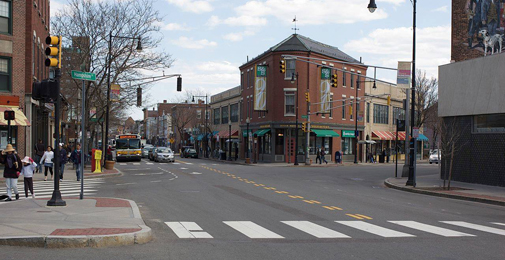 “The association has gone through some struggles. When I came on, there was a board really only in name,” said Jenny McBride, a board member of the former ISBA and co-owner of the Inman Oasis spa. Being part of the ECBA means a larger, active board as well as “more money and more resources, because they’re connected with larger businesses and developers.”

The ISBA, founded in April 2004, has active volunteers and successful, long-running events to contribute, such as Inmanween, a Halloween event, McBride said.

But in the eight years since the ECBA was founded, its membership has increased to 90 businesses from five as it worked to make Cambridge Street “a better place to do business,” said Patrick Magee, its president and owner of Atwood’s Tavern. That includes place-making initiatives such as East Cambridge In Bloom, which puts up flower baskets, meetings with politicians to discuss issues facing business owners and advocacy on specific topics.

The first phase of the merger is primarily about assessing “what business owners down in Inman Square are looking for, and how we can best facilitate that,” Magee said. The next phase is to “work on being a collective voice for those businesses to maintain the strength and individual identity of Inman Square.”

“Inman Square is a beautiful focal point and landmark at the end of Cambridge Street” that anchors the East Cambridge business community, Magee said, and the merger helps define the community geographically.

But Inman Square businesses face challenges, including distance from T stops, limited parking, decreased foot traffic and empty storefronts, McBride said. She hoped the merger, contemplated by Inman business owners since the fall of 2015, would “create increased visibility for Inman Square as well as for East Cambridge.”

Additionally, Magee hopes the larger membership that comes with the merger will strengthen advocacy efforts so “city councillors hear a more consistent voice from the small-business community,” he said.

“Oftentimes, as we look to move things forward, the small-business community are the people who get pinched the most, and there are real dollar effects for some of the decisions that are made at the city level, and they aren’t always understood,” Magee said, citing the City Council’s polystyrene ban enacted Oct. 20 as an example of legislation with costs borne by small-business owners.

Member Phyllis Bretholtz described the association as a “group of neighbors focusing on vitality, interest and community around Inman Square,” including beautification, traffic patterns and the new MBTA green line extension in neighboring Union Square.

Fellow member Susan Markowitz said the group emerged primarily out of concern for local business. Founders “started thinking about it because we knew several businesses were going out of business,” Markowitz said. “We knew of the merger and wanted to support them.”