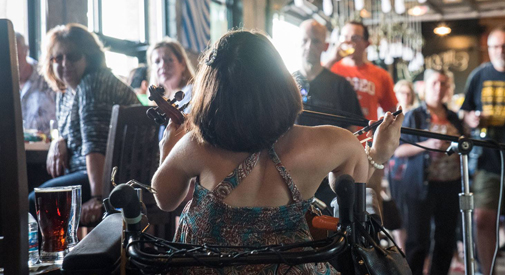 The stunning, haunting music of Gaelynn Lea can be appreciated live tonight at Passim in Harvard Square, as the winner of last year’s Tiny Desk Contest from NPR Music embarks on her second national tour.

As a classically trained violinist and songwriter, Lea is well-known in her native Minnesota, and has played with the band Low and musicians such as Alan Sparhawk, Charlie Parr and Billy McLaughlin. But her unique fiddle music – aided by looping pedals that she says “combine the old with the new” and adds a hypnotizing depth as she saws, plucks or sings  – should be appreciated solo.

This is not folk. Or, if it, it’s at folk’s atmospheric, experimental and alternative fringes; her holiday-themed solo album, “Deepest Darkness, Brightest Dawn,” would be more properly slotted in the ambient section of a music collection, which is how she’s described as she heads to South by Southwest for the first time in March. The aim, she says, is to “create a meditative, layered sound that allows the listener’s mind to drift.”

Lea’s music may already be familiar, as she’s traveled far from her usual Duluth haunts in the past year or so.

Her “Someday We’ll Linger in the Sun” beat out more than 6,000 contributed videos in the NPR Music contest, and the resulting Tiny Desk Concert has been watched more than 872,500 times on YouTube. User comments on the site are a notorious cesspool for the worst of humanity, so a sense of Lea’s effect can be attained from the comments she draws: “Jesus Christ, this is powerful music,” in the words of one watcher; and, in response to “Someday We’ll Linger,” another said, “If that first song doesn’t bring a tear to you eye, you aren’t human. So beautiful.”

As a woman born with so-called brittle bones disease, Lea is also drawing attention for the TedX Yale talk posted Wednesday, in which she spoke on “Sexuality and Disability: Forging Identity in a World that Leaves You Out.” And the song “When We Were Young,” which she wrote and performed with Sparhawk, was featured on the Sundance Channel drama “Rectify” in June 2014.

But Cambridge gets her first. Tickets are $20 for the 8 p.m. Thursday show, but there’s a pay-what-you-want streaming option at concertwindow.com/clubpassim for those unable to attend in person.