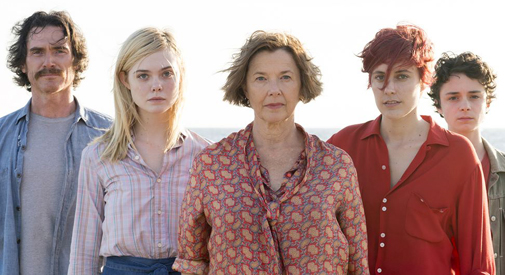 Possessing an enormous warmth and empathy for its characters, Mike Mills’ “20th Century Women” may not surpass his previous uplifting output, “Beginners” (2010), but offers up an intriguing mirror image. Where “Beginners” was a soulful depiction of fatherhood and self-inflicted isolation, “20th Century Women” takes a look at motherhood and how extended family isn’t always related by blood. 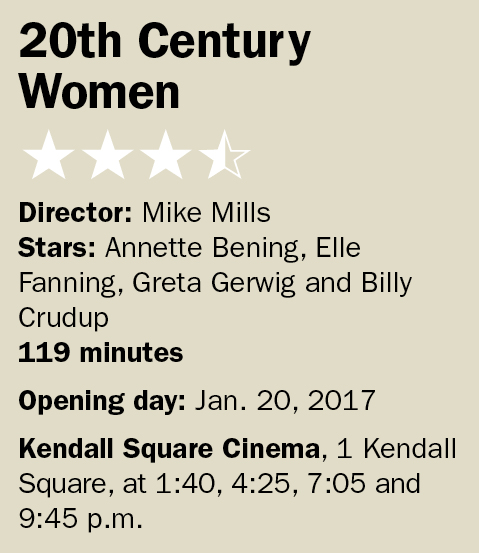 Dorothea (Annette Bening) is a single mother in her mid-50s trying to raise her son, Jamie (effective newcomer Lucas Jade Zumann) to be a decent, independent young man. Worried she is unable to impart all the wisdom he might need, she enlists his friend Julie (Elle Fanning) as well as her tenants, carpenter William (Billy Crudup – back to his Russell Hammond looks) and fuchsia-haired punk Abbie (Greta Gerwig), to help guide him.

The film is sun-kissed in Santa Barbara hues, and cinematographer Sean Porter captures the effervescent atmosphere of the late 1970s with a bohemian-chic eye. Porter, along with editor Leslie Jones, captures something so simplistically beautiful as a beach at sunset, understanding that the narration/pseudo-biographies and images will be enough to instill nostalgia, even if viewers didn’t grow up in that time or setting. This is, after all, something of a love letter to Mills’ youth, so by what other means could the film be depicted but as a fairly weathered but much adored old family portrait?

In a career full of them, Bening delivers one of her strongest performances as a mother trying her best to understand her son while carving out a life for herself, separate from him and his wants and needs. Bening has always possessed a towering demeanor, and here she’s allowed to soften her edges and play less the role of a stern mother and more the role of a woman who is kind and decent, if sometimes misunderstood.

Gerwig, however, is the standout in a film full of tremendous performers. With her general lankiness, demeanor and vocal cadence she could be prone to typecasting, yet uses her idiosyncrasies to her benefit as a character who outwardly is much different than the vulnerable version underneath.

The film earns its heartfelt status through Gerwig’s Abbie and her interactions with Jamie. It’s those moments that demonstrate Jamie’s real character as he tries to escape his mother’s beliefs that he is destined to mess up and become self-centered based on his gender alone. He just needs to be there, his mother tells him, so he is, forming a real bond with Abbie as she goes through a tumultuous time in her life.

The script, also penned by Mills, has humor, but it never comes at the expense of the characters. There’s an idea that to create great art one needs to “write what they know” and clearly Mills has created a wonderfully touching character in Dorothea by doing so. By trying to understand the female experience by simply listening, Mills has created a delicate and honest story full of vibrant and eclectic female characters, all of whom own their agency and femininity with varying degrees of triumph and confidence: Dorothea’s world-weary take and traditional ideas that clash with her modern sensibilities; Abbie’s punk rock, against-the-system rage and willingness to detail the nitty-gritty of menstruation to a table of dinner guests; and Julie’s youthful understanding of her own body and realization that being a friend with a boy doesn’t automatically require her to return his exact affections. If we’re going to have to fight for more female voices behind and in front of the camera for the foreseeable future, at the very least it might be nice to see more directors such as Mills attempting to present the female experience onscreen.

A beautiful depiction not just of family but of different generations of characters, mainly women, and what it means to be one in a time of transition and growth, “20th Century Women” is as affectionate toward its characters – and by that virtue to its viewers – as Dorothea is toward Jamie. It’s yet another film in Mills’ already impressive filmography, which has created great films out of quiet and introspective stories.