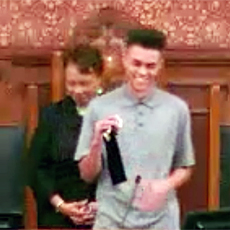 Teen saw to family, went back into burning home for other children
By Marc Levy

The December fire in the Wellington-Harrington neighborhood offered Isaiah Robinson a chance to show how much he cares about his family, and the City Council did it again Monday as it presented him with a proclamation of his heroism and a key to the city.

Robinson, 16, ran into his burning home Dec. 3 and alerted his family and neighbors to the danger – they were in the path of a rampaging blaze that would take nearly 150 firefighters some five hours to extinguish, with several buildings being destroyed completely. He got his 3-year-old sister, Juliah, to safety. Then he went back in and carried out three of his neighbors’ children.

“As burning cars exploded in the streets below,” Mayor E. Denise Simmons noted at a special presentation before the council’s regular meeting.

Vice mayor Marc McGovern said he talked later with the first firefighters to respond that day, who shrugged off their own efforts by saying “that’s what we’re trained to do.”

“Well, Isaiah is not trained to do that. And without protective gear, without training, in the middle of watching his home burn, he went back into that home to rescue other people,” McGovern said, calling Robinson “an incredible hero to this community.”

When Robinson received the key to the city, he beamed, and when it came time for him to speak – joined on the mayor’s dais by Juliah – he started strong, thanking Cambridge Rindge and Latin School, where he was one of 11 students who lost their home in the 10-alarm blaze. Then he faltered. Overcome by emotion, he struggled to speak.

Through sobs he went on to thank his friends, and then his mom, “for staying strong and keeping my family together. Without her I wouldn’t know what to do.”

After more gratitude for the staff at his high school for having “made sure I wasn’t going the wrong direction and made sure I was healthy, mentally and physically,” Robinson got hugs and a standing ovation. His family was invited to join him alongside the mayor, and his crowd from CRLS waved from the audience.

“A true hero shows his emotions and how much he loves, and doesn’t hold it in,” Carlone told the teen, “so I give you even more credit for showing how much you love your family.”