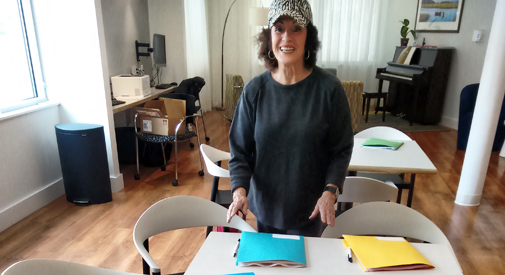 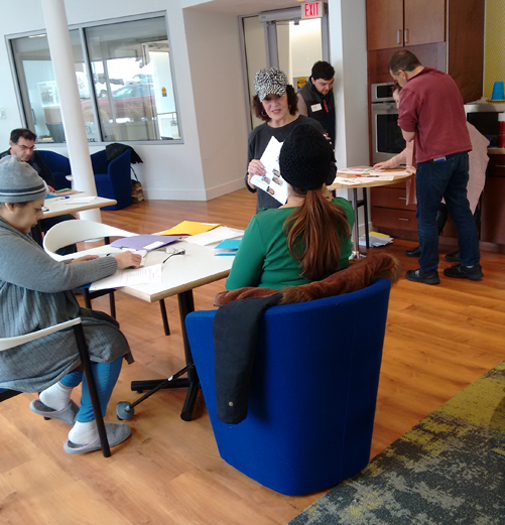 On a cold, windy morning, Madalena Reyes wiped down the counter in the community room kitchen at a subsidized housing complex in Revere. The kitchen was already spotless but Reyes, 80, likes to keep busy.

That habit, plus a desire to “help someone else,” she said, had led her to an unusual program that enlists community volunteers to help the Cambridge Health Alliance connect with immigrants and others who might otherwise be hard to reach.

Reyes is one of 30 active volunteers who have gone through four months of weekly training sessions plus six more months of “field experience” that will give them certification in CPR and mental health first aid, among other disciplines. Another 24 started training this month, Figueiredo said.

The program is part of a broad effort by by the Alliance, often out of sight, to improve the health of an entire community, not just individuals. Volunteers often help conduct educational sessions in churches, mosques and community centers on subjects such as healthy eating and diabetes management or, on rare occasions, work with an Alliance physician to communicate with an individual patient. Volunteers can also educate officials at the health care system; for instance, some of those who emigrated from the Middle East warned that asking patients whether they smoked cigarettes didn’t “do anything to address hookah-pipe smoking,” Figueiredo said.

The volunteer program, begun in 2001, also has another aim: to help immigrants get better jobs, often at the Alliance itself, Figueiredo said. Roughly one-third of volunteers have medical training in their home country but find it difficult if not impossible to get credentialed here. His own colleague, VHA event coordinator Hugo Rengifo, is a former program volunteer. Rengifo said he worked with abused and traumatized children in Colombia before coming to the United States.

A physician in Iran working as a cashier “was just hired to our falls prevention program,” Figueiredo said. Another former volunteer helps patients in the emergency room, while two are resident physicians, or doctors in training.

Anchor of the community

One element of the program helps volunteers learn how to apply for jobs, Figueiredo said. Volunteer Yemisiaeh Kibret, 33, was a news anchor on television and a human-rights activist in her native Ethiopia before coming to the United States 11 years ago. Kibret tried to get a degree at Quincy College, but couldn’t while working two jobs, she said. She was working at an $8-an-hour job as a cashier when she joined the volunteer program.

“They did a program in the building” where she lived with her three children, a public housing development near Fresh Pond, she said. She applied. “I was so happy to find them. It gave me energy. I have a passion, but didn’t know what to do before I found them.” Kibret isn’t an active volunteer now because she has a good job at Cambridge Economic Opportunity Committee, the anti-poverty agency, helping people get food stamps.

On this Feb. 9 morning, Reyes, intern Melissa Hallisey, Figueiredo and Rengifo had a delicate and unusual task.

The Revere housing development where they were working served disabled tenants in households where at least one member was 55 or older. And many tenants had psychological, not physical, disabilities, with depression the most common diagnosis, Figueiredo said.

The volunteer program was starting its first-ever cooking class – with healthy recipes, of course. A group of no more than eight tenants would come together for five weekly classes of about three hours, during which they would learn about nutrition, cook a meal together, share it and take home leftovers.

But another aim was to persuade often-isolated tenants to leave their apartments and socialize, Figueiredo said.

Four tenants – two women and two men – straggled in for the first class; a third woman showed up later. The men sat down at one table, the women at the other. Reyes was soon joking with the women as they recounted their experiences with children and food. When the men joined the conversation, it turned out had been a baker and the other had cooked professionally.

Everyone chopped red peppers and onions for a chickpea salad as Hallisey, a graduate social work student in community health at Boston College, quizzed them with rapid-fire questions on subjects such as how to choose the healthier option between canned chickpeas and canned white beans (the chickpeas can said “no salt added” and had less sodium).

“What is sodium?” Hallisey asked. But they knew that sodium was salt, and could answer many of Hallisey’s other questions. Within an hour, all five were laughing easily together; apparently the socialization aim succeeded. 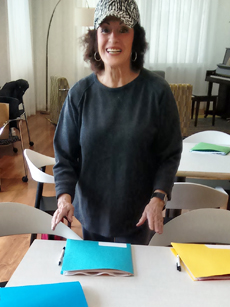 Reyes said she applies lessons from the Volunteer Health Advisor Program not only in the community, but to her own family.

Reyes, a longtime Cambridge resident who now lives in Chelsea, joined the program a year ago after being recruited at exercise and nutrition classes she attends in Everett, sponsored by the Alliance and the Everett Council on Aging. A big attraction was a “game show” put on by Figueiredo in which he quizzes participants about health issues, she said. A correct answer gets a $10 gift certificate to a popular supermarket; others get a $5 gift certificate.

Program recruiters “told me ‘You’re going to love it,’” and she agreed to join. Now, after going through the training, she tries to educate not only the people who come to the sessions where she helps, but her own family – three of whom have diabetes, and one also smokes, Reyes said. “I’m trying to make her stop,” Reyes said. “I told her smoking makes your arteries harden. Every disease I learned about at CHA is linked to smoking.”

So far, the smoker doesn’t smoke “in front of me,” Reyes said. And when she gives advice to her other family members, “they say, ‘You have to die of something.’”

Perhaps that experience has made her a little skeptical about her ability to change minds. Asked whether she thought her ability to speak Portuguese made fellow Portuguese speakers more likely to take her advice, Reyes said: “That’s to be seen.”

Reyes admits she herself doesn’t practice every healthy habit. “I’m supposed to be sleeping seven and a half hours, which I don’t. I sleep three hours,” she said. “I always find something to do.”