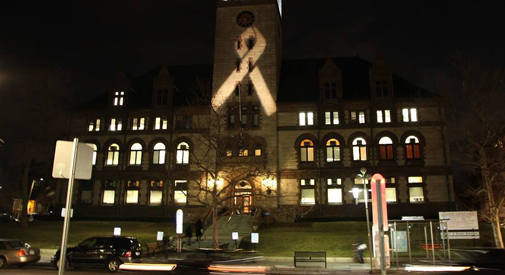 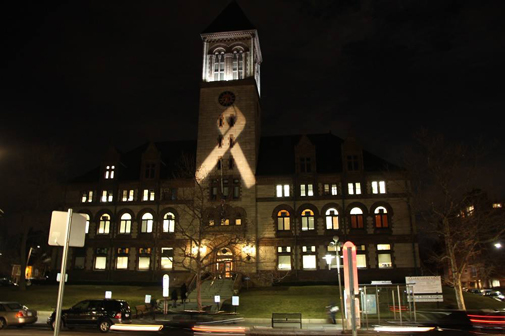 A white ribbon will be protected onto Cambridge City Hall throughout the coming week.

Cambridge participation in White Ribbon Day will be marked by a few events during the week of Feb. 27 to March 3.

White Ribbon Day is an international campaign that asks men and boys in particular to stand up and speak out against gender-based violence, including by making a personal and public commitment to promoting equality, respect and nonviolence in their relationships and all aspects of their lives.

An image of a white ribbon will be projected at night onto the façade of City Hall during the week.

Events include a White Ribbon Day pledge and photo event at 2:45 p.m. Feb. 28 outside Cambridge Rindge and Latin School’s Fitzgerald Auditorium, 459 Broadway, Mid-Cambridge, when people are invited to take the White Ribbon Day Pledge and participate in a group photo. Participants are encouraged to wear white to this any-weather event.

There will be a citywide White Ribbon Day “White Out” on March 1, when all City of Cambridge employees, departments, schools, universities, organizations, businesses, families and residents are asked to get involved in the campaign by wearing white, then gather with family, friends, classmates and colleagues in the white clothes and take a selfie or group photo, posted onto Facebook, Instagram, Twitter or other social media with the hashtags #WRD2017 or #MENDCambMA.

“Anything white will do: a white hat, sweater, sweatshirt, collared shirt, T-shirt or jacket,” organizers said.

For information or to RSVP to city events, visit the its White Ribbon Day Facebook page or click here.

The Cambridge-based Massachusetts Alliance of Portuguese Speakers plans a White Ribbon Day art exhibit on from 4 to 7 p.m. March 3 at the health and social services organization’s office at 1 Stoughton St., Dorchester. The group has invited a group of male artists from the Portuguese-speaking community to each exhibit four to five pieces of artwork. Confirmed so far are visual artists Alexandre Henrique, Tierry Tavares, Ricardo Nassif and Yuri Ferreira, who will share with the guests their personal interpretation of their art pieces, reflecting themes of female empowerment, self-worth, non-violence and respect. State Rep. Evandro C. Carvalho said he would be at the event to show his commitment to the cause and to share a few words with the audience.