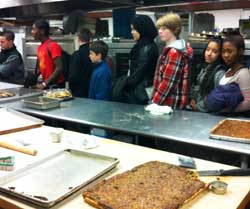 A 10-cent increase next year means another soon, adds uncertainty
By Jean Cummings

School lunch prices are going up, but by how much is still uncertain.

School Committee members agreed Tuesday night to raise lunch prices by 10 cents starting next September, but also referred the issue to a subcommittee to plan for price hikes in subsequent years.

Cambridge gets $1.5 million in federal subsidies each year for its public schools’ lunches from the National School Lunch Program. This covers just over 40 percent of the total $3.6 million breakfast and lunch program.

In exchange for subsidizing free and reduced-cost lunches, the federal government requires that schools charge a minimum amount for paid lunches to ensure “paid lunch equity” – that the federal funds are going to the kids who need subsidized meals.

Each year, based on costs and each state’s poverty rate, the federal government adjusts the minimum required average cost of paid lunches. This amount is pegged at $2.87 for Massachusetts schools for the next school year. Cambridge charges $2.75 for elementary grade lunches and $3 at the high school. With about four times as many elementary lunches as at Cambridge Rindge and Latin School, the weighted average sales price for the district comes in at $2.80 – seven cents below the threshold, requiring a price increase.

Historically, Chief Operating Officer Jim Maloney said, the district has chosen to make larger price increases less often, instead of incremental changes each year. “We have found and have feedback,” Food Services Director Mellissa Honeywood said, “that it is easier for families to know that there will be stable pricing for closer to three to five years than if we make minute increases [each year].”

Honeywood and Maloney recommended that the committee approve a 25-cent increase for elementary school lunches and a 50-cent increase for high schoolers. The costs would apply to adults as well as students; milk costs would stay the same. That increase would allow the district to avoid raising prices again for three to five years, they said.

Several members hesitated at the size of the increases. For high school students who buy school lunch every day, a 50 cent increase totals $90 for the year, member Emily Dexter pointed out. For elementary students, it’s $45.

Maloney offered an alternative to the 25- and 50-cent increases: If all meals are raised by 10 cents, he said, it would meet the threshold by a few pennies. He cautioned, though, that prices probably will be raised annually, which “historically has not been done.” The last price increase was 2013, Honeywood said, for 25 cents.

Members sought more certainty about future hikes: “If we do the annual [10-cent hike] now,” member Manikka Bowman asked, “when is the next time we will have to have a price hike? If we take it to the highest [price increase], will it be another five years? Or six years?”

But the state and the districts are at the mercy of the U.S. Department of Agriculture, Maloney and Honeywood explained. There is no way to anticipate any year’s hike until the state issues the figure in December. The required price level changes every year, and Honeywood said she has never seen that number go down. Typically, she said, the price jumps from five to 10 cents each year.

Uncomfortable with making a call for 25- and 50-cent hikes at the meeting, members voted to ensure the smaller rise this year and refer future planning to an unnamed subcommittee. They kept unchanged, however, the proposal to increase lunch costs for adults by 25 cents for K-8 and 50 cents at the high school. Committee member Richard Harding backed the idea of spending more time on the topic later “so that all parents understand what’s happening and how the system works.”

Maloney and Honeywood had a clear preference for a larger jump that could remain unchanged for a few years. In addition to feedback that families preferred more predictability, they cited expense-related reasons.

“We have rising costs,” Maloney said. “We have a very broad menu. And unlike a lot of districts, we don’t rely solely on surplus Department of Agriculture food.” Food surpluses are another component of the National School Lunch Program, but Cambridge uses them judiciously “in stews and sauces,” he said, and supplements them by buying fresh foods.

“We’re not running this to make a profit,” he said. “We subsidize food services to the tune of almost $1 million a year,” something few other district do.

Honeywood also pointed to the district’s sustainability project. Cafeteria paper goods have become more expensive as the food services’ compostable program has expanded to all schools. “Part of the increase was to mitigate the initial payment costs” of making that change, she said, “with anticipation that over the course of the next few years the costs of compostables may come down.”

The reason for higher-cost lunches at the high school, as well as the proposed 50-cent increase, they said, is that the CRLS lunches serve “significantly larger portions.”

“If I may be so bold as to say, $3.50 for a meal at the high school is worth is,” Honeywood said, with nodding agreement from many committee members, including student member Paul Sullivan. “You’re not going to find that bargain anywhere in the city of Cambridge,” she said, noting the large serving sizes.

A chart provided in the motion comparing lunch costs at eight surrounding neighborhoods put Cambridge’s current prices in the lower half, with Quincy, Medford and Malden charging less, although many communities will likely have to raise prices to meet the new requirement. Somerville charges the same as Cambridge; Watertown charges the higher rates Maloney and Honeywood proposed.

Free food for all unlikely

While they had Maloney and Honeywood there, Fred Fantini asked about the notion of providing free food for all students raised in School Committee and City Council meetings this year – originally and most forcefully by councillor Leland Cheung.

“There is no state program that exists that Cambridge qualifies for that would extend to free lunch for all families,” Honeywood said. There is a current program that requires a threshold of 40 percent of families to participate in another poverty-related program. “We are not close,” said Honeywell, saying Cambridge typically has around 20 percent participation in that other program. Cambridge does offer free breakfast for all students at the Kennedy-Longfellow School and the Fletcher Maynard Academy through yet a third program, she said.

Cheung’s proposal, though, is simply for the city to pay for meals for all students – not only for nutrition and equity reasons, but also to free up the staff from “typing in 10-digit numbers for each kid” and allow them to interact with the kids.

This post was updated May 7, 2017, to correct an incorrectly stated percentage in the third paragraph.