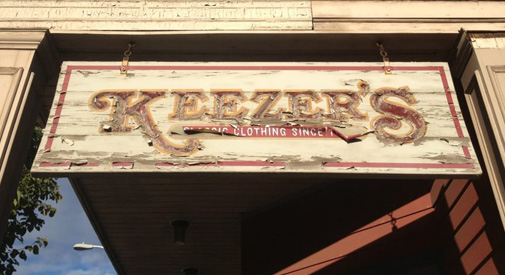 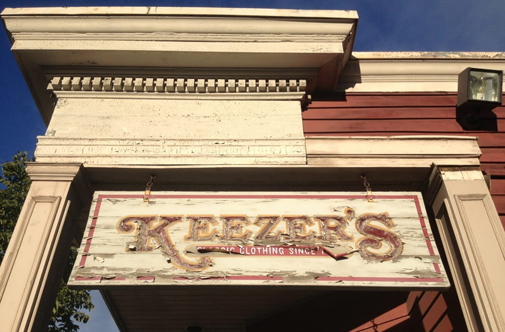 Keezer’s weathered sign will be gone from its River Street location after it closes at the end of a retirement liquidation sale. (Photo: Trish G. via Yelp)

This is the final tux season for Keezer’s Classic Clothing, the formalwear store in Central Square. After 122 years in business, the store is liquidating with the retirement of current owner Leonard E. Goldstein.

I am retiring this year. Keezer’s has thousands of items on sale. Sweaters are 40 percent off. Overcoats and leather coats are 30 percent off. Many individual tuxedos are marked down. We are putting more items on sale all the time. Thanks to all of our loyal customers.

The impending loss was little noticed until the Harvard Crimson wrote about it two days ago, followed by The Boston Globe. According to the Crimson, the 140 River St. location has been sold, but Goldstein hoped someone would continue the Keezer’s clothing business.

Billionaire Harvard alum Gerald Chan has been identified as the buyer of the property that convinced Goldstein to retire – a move likely to endear him even less to the Cambridge community. Chan and his Morningside Group investment company have been on a buying spree of more than $120 million in commercial properties in Harvard Square and residential properties throughout the city, uprooting some institutions in the process. The Upstairs on the Square restaurant closed after Chan’s purchase of its building, replaced by the Chan family’s Parsnip.