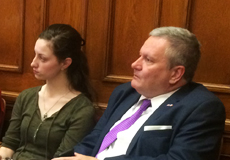 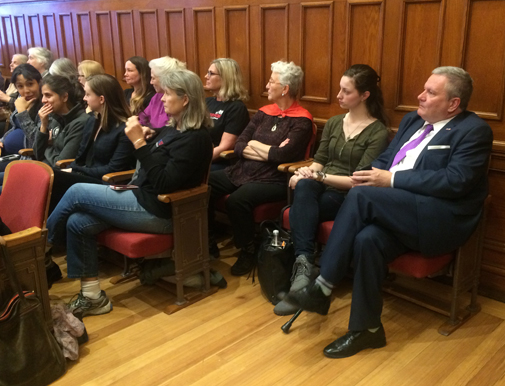 Worried undocumented immigrants got a boost locally this week, but immigration advocates say it won’t matter much if the Safe Communities Act doesn’t find more support at the state level.

The Act working its way through the Legislature specifies that police resources be used to fight crime, rather than take any action based only on immigration status, spells out opposition to a “Muslim registry” and demands due process for detained immigrants, and won the support Monday of city councillors who voted to ask state reps and senators to support it as well.

“I hope folks on Beacon Hill – our delegation aside, because I’m pretty confident in the way they’re going to go on this – stand behind their words and do what is right for some of the most vulnerable people in our state,” vice mayor Marc McGovern said. “We have many in the Legislature, including over governor, who have publicly stated their opposition to many of the things coming out of the White House … but the real test comes down to when they take the vote.”

“Anybody can say whatever they want in the media,” McGovern said. “It’s when you put your name next to something that when people start to get a little squiggly.”

There’s cause for concern among backers of the bill. As Cambridge led the state in voting Democratic in November, Republican President Donald Trump won 36 percent of votes statewide to Hillary Clinton’s 61 percent, and 91 cities and towns in the state gave Trump the majority. (The nearest community to Cambridge to go for Trump in the past election was Saugus.)

Emmanuel “Manny” Lusardi, a longtime advocate for immigrants who this year became liaison for immigrant affairs to McGovern’s office, is worried about the fate of the Act, considering a lack of vocal support among legislators, the fact that just over a quarter of Massachusetts communities voted for Trump and that Gov. Charlie Baker has indicated a preference for immigrant support at the local level, rather than as a state promise. In addition, a Supreme Judicial Court case to be heard next month may affect the bill’s chances.

But Lusardi also has been disturbed to find a lack of interest in the bill even in liberal Cambridge.

“I was amazed, dumbfounded and deeply disappointed by local activists and especially political leaders – no one in this room – who did not, could not or would not understand the need to offer this policy order,” he said. “I kept hearing, ‘Cambridge is already a sanctuary city, why do we need to do this?’”

Along with underlining the message that undocumented immigrants are safe going to police for help or even to help police fight crime with tips or eyewitness testimony, state-level action can reassure immigrants that they can go on getting health care, housing aid and using school resources without fear, said Lusardi and Amy Volz, co-organizer of the recently formed Harvard Law School Immigration Response Initiative.

“One of the clients I work with is a victim of domestic violence who has been too scared to call the police for fear that she will be deported,” said Volz, who works with immigrants in Cambridge and surrounding cities.

Though McGovern said Cambridge needed to set an example for other state communities in expressing support for the Safe Communities Act, it actually follows the Central Massachusetts town of Pelham, population 1,321, where a Saturday annual town meeting beat Cambridge to the punch by two days. Supporters said they felt a statewide bill was better than becoming a sanctuary town itself, according to a Monday report on MassLive.

Cambridge Councillor Dennis Carlone said supporting the Act “just makes common sense on every level, and is very American in its ideals.” 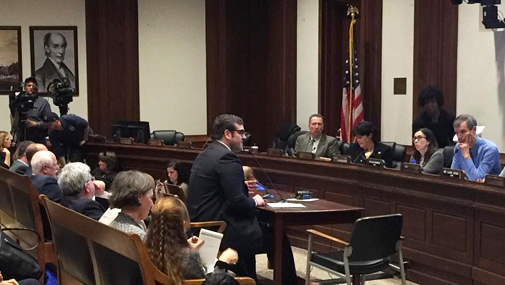 Also Monday, the Legislature’s Joint Committee on the Judiciary took testimony on a bill addressing one component of the Safe Communities Act: prohibiting state resources from being used as part of federal Immigration and Customs Enforcement efforts that “deputize” local and state authorities for immigration actions. State Rep. Mike Connolly testified in favor of the prohibition, along with Cambridge citizens Lee Farris, Nancy Ryan, Phil Sego, Dave Slaney and others, according to Connolly’s office.

“The 287(g) program and the proposal to use local prisoners to build Trump’s wall are both abhorrent to our values as a commonwealth, and a nation,” Connolly said, using the statutory name of the deputization program.

“These bills aren’t quite as broad as the more comprehensive Safe Communities Act [but] represent concrete action we can take right now to resist the hatred and xenophobia of the Trump agenda right here in Massachusetts,” Connolly said via Facebook.

This post was updated May 11, 2017, with a report on state Rep. Mike Connolly’s actions on Beacon Hill.