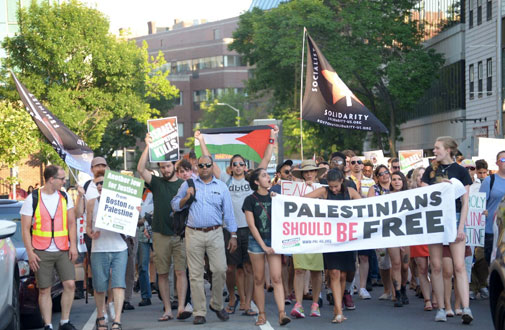 After a rally at City Hall, a march down Massachusetts Avenue to Harvard Square advocated against Israeli actions in some Middle East territories. (Photos: Palestine Advocacy Project)

A decades-old conflict in the Middle East was marked Monday in Cambridge, as a Palestinian rights group gathered at City Hall for a rally and marched down Massachusetts Avenue to Harvard Square.

The 6 p.m. rally drew some 250 people to hear four speakers from human rights groups, according to the Boston-based Palestine Advocacy Project. It marked the 50th anniversary of what’s called the occupation of 1967, when Israel emerged victorious over Egypt, Jordan and Syria at the end of the Six-Day War and expanded into captured territory.

Speakers and attendees at the rally decried Israel’s continued presence in former Palestinian territories of the West Bank, East Jerusalem, the Gaza Strip and Syrian Golan Heights, noting that generations have been raised in lands controlled by the Israeli military. “For so many people I know, the violence of occupation and the threat of imprisonment has shaped their lives, shaped their sense of where they might go, how they might live, and what they might achieve,” speaker Amahl Bishara said, as quoted in a Palestine Advocacy Project press release.

That is made possible with American assistance, with Israel getting “the lion’s share of U.S. foreign aid funds,” spokesman Richard Colbath-Hess said. He put the figure at more than $230 billion over the decades, with another $40 billion announced for the next 10 years.

As a result, when the crowd broke up the rally to march to Harvard Square, its chants cited by Colbath-Hess included such things as “Not another nickel, not another dime, no more money for Israel’s crimes” in addition to one linking actions in the Middle East with a proposed U.S. policy: “From Palestine to Mexico, these border walls have got to go.”