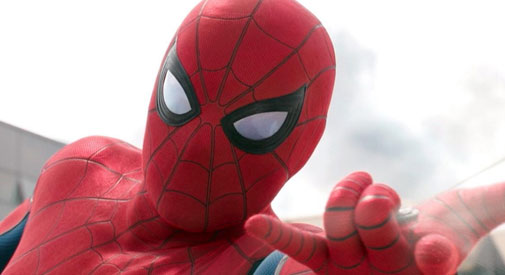 There’s a lot of baggage that comes along with the release of director Jon Watts’ “Spider-Man: Homecoming,” the third iteration of the character onscreen in 15 years. There’s the drama regarding the tanking of Marc Webb’s Andrew Garfield-led “The Amazing Spider-Man” two-parter and of course the follow-up to Sony and Marvel’s partnership in bringing the newer, fresher-faced version to screen in “Captain America: Civil War.” Many of those worrying about the character being rebooted again were put at ease with how seamlessly Tom Holland’s fit into the Marvel Cinematic Universe, and just how damn charming the young actor was in the role. That hasn’t stopped those worrying reasonably about an inconsistent tone from the many hands making “Homecoming” (there’s six credited screenwriters on this script), but despite it all, this the film is an absolute delight. Much of that success lies on Holland’s plucky and exuberant shoulders, but as was the case with the character’s best outing so far – in the “Spider Man 2” made by Sam Raimi in 2004  – “Homecoming” succeeds because it remembers that Peter is human first, a superhero second.

As we’re yet again reintroduced – this time without having to endure watching Uncle Ben die (his name is never mentioned) or Peter being bitten by a radioactive spider – we find Peter in the throes of excitement directly following the events of “Civil War.” Excited at the possibility of being considered a member of The Avengers, Peter begins ditching friends and schools and skirting responsibility in favor of showing Tony Stark he’s ready to be a full-fledged member. While we don’t see him through the beginning steps of discovering his powers, he is still very much on the learning curve, with his skills having yet to be honed; often saving the day, but usually making a mess in the process. His training is accelerated by the arrival of The Vulture (the best villain of any Marvel film since Loki) and the appearance of black market super weapons in the hands of your average, day-to-day criminals.

What allows “Spider-Man: Homecoming” to transcend some of its superhero brethren is that it’s first and foremost a teen movie. There’s a duality to Peter’s incessant want to become a superhero and be an Avenger – sure, there’s his simple admiration of the heroes he’s grown up watching, but that desire to be a member is also a need to be taken seriously as an adult, just like any other teen (for the most part) but without the spandex. There’s a sadness to watching Peter miss out on some everyday activities, such as passing up a moment to impress his crush Liz (a charmingly frank Laura Harrier) and take his bully, Flash (an excellently whiny Tony Revolori) down a peg. It’s a down-to-earth attitude that allows Spider-Man to reach new heights. It also helps that, for the first time, Spider-Man looks like an actual teen. While we’ve seen heroes in peril countless times, it makes a difference when the hero being pummeled is a kid. The stakes are instantly higher, which makes for more thrilling and nail-bitingly intense fight sequences.

The cast across the board is superb, with actors such as Harrier, Revolori, Zendaya and especially Jacob Batalon making the most of their supporting roles as Peter’s classmates. Marisa Tomei is wonderful as the new Aunt May, demonstrating her concern over Peter’s well-being with off-kilter charm, and Robert Downey Jr.’s return as Tony Stark is the most playful he’s been since the first “Avengers” film. It’s Keaton and Holland that make the greatest impression, though, each a superb foil to the other. Keaton continues his career resurgence as an accidental villain whose blue-collar upbringing and sensibility are forgotten in a world where superheroes exist, which plays excellently against Holland’s humble upbringing. Holland delivers a star-making turn, imbuing his version of the character with a Christopher Reeves “do good” attitude in which saving the day or helping someone in need is never a question – it’s just something he has to do. It helps that he’s believably athletic, with experience in ballet and gymnastics that gives this Spider-Man a more acrobatic beat in his step than ever before.

The script contributions and direction by Watts do their fair share of making this the lightest and funniest MCU film in ages, giving every character a moment to shine and using direction to tell a joke, rather than just relying on quips. If there’s a failure, it’s that when the film should be visually enthralling, such as in the final showdown, it falters and regresses to explosions and camera-shaking. Watts is able to make the mind-numbing passing of time during school more visually exciting than what becomes another typically tepid super battle.

In a world of heroes, where myths sling magic hammers and summon lighting, playboy millionaires build an army of robots that threaten to take down the world, super soldiers gets frozen in ice and a green and growling “exposed nerve” can crush those demigods with a well-thrown punch, Spiderman remains remarkably human. This is to the credit of the Marvel universe, where humanity has been brought to the most outlandish of characters (say, a talking, gun-toting raccoon and his sentient plant), and to the team on “Homecoming,” which kept humanity and heart a focus. Peter is fallible and eager to a fault, with a lot to learn, but he is trying to be good, to save the day and to make the lives of others better. That’s heroic.