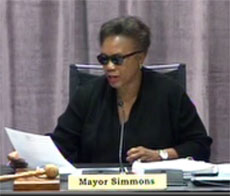 The School Committee went on record Tuesday declaiming against President Donald Trump’s order the day before to end a program protecting young, undocumented immigrants from deportation – known as DACA. The motion, penned by Mayor E. Denise Simmons, was a late addition to the regular meeting business.

“We vow to do anything in our power to protect the ‘Dreamers’ among us,” Simmons read aloud, using a nickname for the nearly 800,000 young people granted temporary legal U.S. residency via a program created in 2012 by then-President Barack Obama that allowed them to apply for citizenship. Children brought to the United States illegally before they were 16 are the only eligible participants. The nickname comes from a 2001 Congressional “Development, Relief, and Education for Alien Minors Act” offering legal status to some young people that has seen versions voted down repeatedly.

“We stand in solidarity with Massachusetts Attorney General Maura Healey in her efforts to sue the Trump administration over its move to abolish DACA,” the motion continues.

Members were appreciative and vocal in their support of the motion.

“Thank you, thank you, thank you,” member Patty Nolan said. She suggesting adding language urging Cambridge’s Congressional delegation to fight “to make this right” through legislation, as well as sending a copy of the motion to Gov. Charlie Baker, whom Nolan thought had not gone on record on Trump’s recent action. (The Washington Examiner reported that just before the School Committee meeting Baker did indeed condemn the Trump order, putting the number of Massachusetts DACA recipients at 8,000.)

“Thank you for once again making sure that Cambridge goes on record,” committee member Richard Harding said to Simmons. “This is a question of human decency. I’m glad that we are … sending a resounding message to students and families. Communities have to come together with a loud and clear message.”

“I would like to go on record and put on my clergy hat and say this is immoral,” said member Manikka Bowman, whose recent sermon at St. Paul AME Church was singled out in a resolution by Simmons earlier in the evening. Bowman went on to allude to some religious institutions “propping up” Trump: “Not only do I want to support this motion from a legal and policy perspective, but also from an interfaith perspective. This does not represent the best of what is faithful and what is right.”

“Even though it is symbolic,” she said of the order, echoing others’ comments, “it is an important symbolic statement and it needs to be made.”

The action took place at the committee’s first meeting of the academic year, after the first day of school.