Cheering another low tax rate on the way, higher minimum for some gets a new look 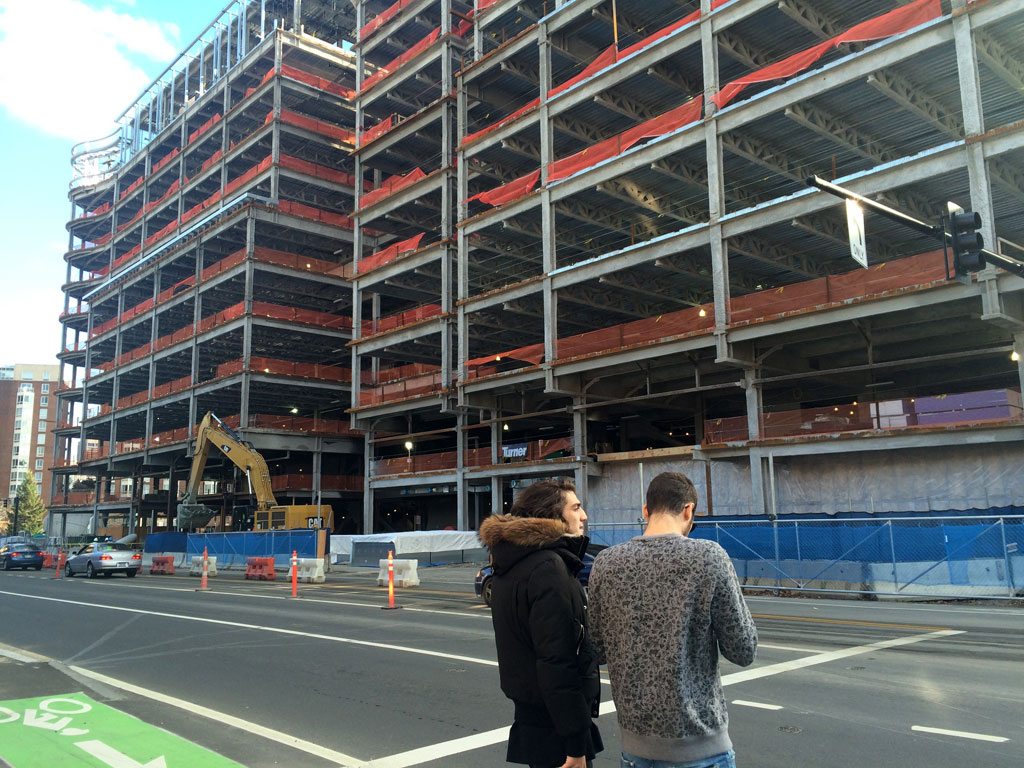 Cheering another low tax rate on the way, higher minimum for some gets a new look

Being a property owner in Cambridge can be a really good deal – too good for some, and finance officials have been examining a minimum tax that might raise what some pay.

A minimum tax is far off, however, if it can be pulled off at all: It would require a home rule petition enacted by the state Legislature, officials said Monday during a City Council hearing on the upcoming tax rate.

Until then, most property owners are looking at another very good year when bills go out late this month, continuing a streak of tax hikes kept low by strong commercial growth and by city government using free cash to guard residents from assessments exploding as Cambridge real estate remains among the most desirable in the country.

“When I was in Belmont, I advised the Board of Selectmen to declare war on the city of Cambridge immediately and surrender so they could solve their fiscal problems, but they didn’t take my advice,” said David Kale, a Cambridge budget director who served as town administrator in Belmont before returning in March as assistant city manager for finance. 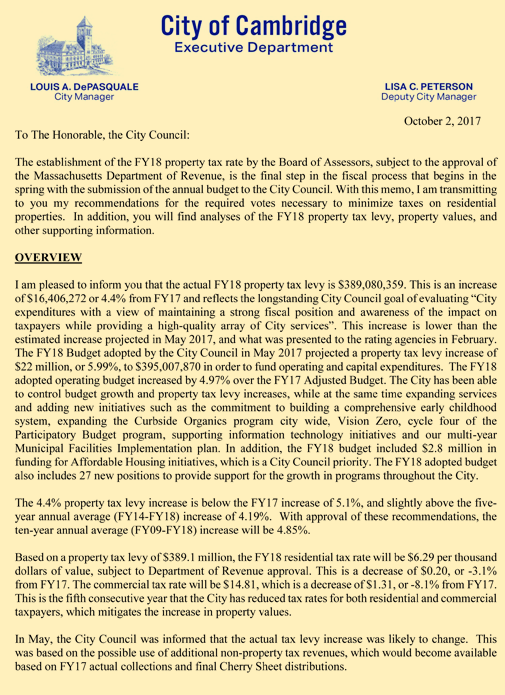 Read the document describing the coming property tax rates by clicking on the image above.

After a series of formal council votes, the annual property tax levy was set at $389 million, a 4.4 percent increase from the 2017 fiscal year, with 69 percent of residential taxpayers set to pay less than last year, no increase or an increase of less than $100, similar to the past dozen years. Residential and commercial rates have gone down for the fifth year in a row to shield owners from skyrocketing values.

In addition, taxpayers who own and occupy their home can save on their bill by having a portion exempted from taxation, and on Monday that rose by about $24,000, to $338,933. Cambridge is one of less than 20 communities in Massachusetts that has a residential exemption.

The owner of a million-dollar home in Cambridge might pay $4,400 in property taxes, vice mayor Marc McGovern said, while a home with the same price tag in a neighboring community – he apologetically mentioned Belmont – would be closer to costing $13,000 annually, with residents also having to pay for academic and other services that come to Cantabrigians for free. “What we’ve been able to do is quite remarkable,” McGovern said. “If we were to raise our property taxes to the state average, you would see a lot more middle- and moderate-income families leave because they couldn’t afford the increase based on the assessment of their homes.”

Not too much housing at once

It helps that Cambridge brings in revenue from several sources and doesn’t have to rely just on property taxes, Kale said. But a formula set by the state in 1978 demands a certain mix of residential and commercial growth to prevent a residential tax “backlash.” If commercial development stopped, homeowner tax bills would soar, as they did in 2005.

“Though we all want additional residential and affordable housing being built, all at one time is not good for the city … It’s something we keep a close eye on,” Kale said.

Councillor Jan Devereux wanted to hear more, considering the “tremendous amount of political pressure” the city was facing to build more housing, making enough supply that prices remain affordable for people who want to live – and ideally buy – in Cambridge. “But if we build a whole bunch of housing, we have to build a bunch of commercial too, right? That’s always left unsaid” by proponents, she said. “I’d really like to see where that takes us in terms of density and population.”

David Maher, a longtime councillor who is in his final three months before devoting full attention to running the Chamber of Commerce, had another item for finance officials’ to-do list: a minimum tax to keep some residents from “the best bargain in the commonwealth,” getting the benefits of living in Cambridge while paying taxes so low it’s probably less than what they owe for a year of cable. “It’s an issue of fairness,” said Maher, who has also raised the issue in past tax hearings.

There is a 10 percent minimum tax in the city, which about 2,400 people in the city pay, but Bob Reardon, director of the assessing department, acknowledged that were some residents in owner-occupied condos worth not much more than $400,000 who would be getting the kind of deal Maher described. “Right now everyone gets the same level of exemption,” Reardon said. “If we were to adopt some kind of residential exemption by class, that would bring [condos] down to about $150,000. They would be paying a little more.”

Unfortunately, it can’t be enacted at the local level, and the state is reluctant to grant home rule on such a major shift, Reardon said, even though “we’re one of the few communities that would be willing to look at it.”

During the tax bill conversation, it was also mentioned that the cost of rebuilding of the 46-year-old Tobin elementary school and Vassal Lane Upper School was now put at starting between $200 million to $225 million. And City Manager Louis A. DePasquale said visits to city fire stations revealed several in need of upgrades, and listened seriously when the need for a new fire station was raised in East Cambridge due to growth in Kendall Square and the difficulties of navigating traffic from existing stations.

A station could go at the bottom of a new office building in place of ground-floor retail, Maher said.