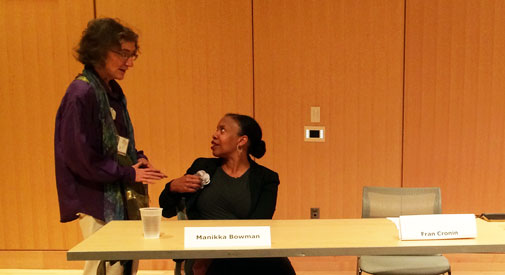 School Committee members Patty Nolan and Manikka Bowman talk before a campaign forum Sept. 13. Like other incumbents, they are running for office in the Nov. 7 elections. (Photo: Marc Levy)

All six School Committee members are running for a next two-year term – though Richard Harding is running for City Council – and there are seven challengers competing for the at-large seats.

The election may or may not have anything to do with the committee rearranging its remaining 2017 schedule so there will not be another regular meeting for seven weeks – until Nov. 21, after Election Day. Only member Emily Dexter voted against the change for the state’s highest-paid and, by some measures, least busy school committee.

At the Tuesday regular meeting, the committee’s third since school started this fall, members opted to convert the scheduled Oct. 17 meeting to an untelevised “retreat” with administration staff to continue developing “outcome measures,” a critical component of Superintendent Kenneth Salim’s District Framework approved by the committee at its July meeting. This is the next step in building specifics into the district framework: Identifying and agreeing on various measures of student achievement, including state standardized tests, local and classroom-based assessments, student portfolios and self-assessment.

This means current members have three regular meetings left before the new committee is inaugurated Jan. 1, and none before election. (Due to Halloween and Election Day, there is only one November meeting on their schedule.) Six regular meetings doesn’t add up to a lot of visibility.

Regular meetings are not the only committee work. There are closed-door sessions on contracts and grievances and “special” meetings and “roundtables,” often untelevised, for discussions on specific issues. There are 12 standing subcommittees, 10 of which have only three members. Members may also work with constituents and meet with school staff and each other as long as there are fewer than four members present, avoiding violations of the open meeting law.

So far this school year members have held: a closed-door session to discuss the contract for their own executive secretary; an untelevised “special meeting” to finalize their evaluation of Salim (at which he generally got good marks, with encouragement to “be bolder” and work with more “urgency”); and an untelevised four-hour meeting (including dinner) at the Royal Sonesta Hotel to start work on developing outcome measures.

They have also scheduled a televised joint roundtable on early childhood education for next week in City Council chambers.

As members Dexter and Patty Nolan made a case Tuesday for scheduling the outcomes work while holding another regular meeting before the election, others argued that logistical issues made it too difficult. Besides, vice chairman Fred Fantini said, judging from the light agenda of Tuesday’s meeting, “I don’t think there is a need to have another meeting. Everybody’s busy. Let’s just put our priority on goal-setting” and focus on the outcomes measures.

Oct. 24 was suggested by Nolan as a date for a makeup regular meeting. (The outcomes meeting apparently must be held Oct. 17 to accommodate committee and administration schedules.)

Member Manikka Bowman, though, said she was unavailable that night because of other work. “In addition to serving the people of Cambridge, I also have responsibilities,” she said. Bowman has often cited other work obligations on some off-Tuesday nights.

“I appreciate the importance of the outcomes meeting,” Dexter said. “I think our first obligation is to the public and to continue with the meetings that we have at the time that they are scheduled,” suggesting that the outcomes meeting could be postponed until after the election.

“It is so divorced from reality that we think a meeting like tonight’s is more important than the outcomes meeting,” Harding objected. “This is very important work. This is the work that the School Committee does.”

Bowman also pushed back at Dexter’s comments. “The work that we are doing [in the outcomes meeting] is a service to the public. Us taking the time to be thoughtful and strategic and work together collaboratively to move the district forward is the business of the School Committee,” she said. She scolded that members should “take the time to do that in collaboration with our new superintendent,” apparently referring to the need to schedule the meeting with Salim and staff on an otherwise regular meeting date.

Nolan’s suggestion to allow for a regular meeting to be slotted immediately before or after the Oct. 17 outcomes meeting was not taken up, with Mayor E. Denise Simmons saying, “We can’t do everything.”

With their $38,000 annual salary, Cambridge School Committee members are the best-paid in the state, by far. Some districts, such as Brookline, pay nothing. Many pay modest stipends of a few hundred to a few thousands. Comprehensive data are hard to come by; for the 19 districts that volunteered information to the Massachusetts Association of School Committees, compensation ranged from $491 to $6,000 annually.

Glenn Koocher, executive director of the association, confirmed that Cambridge is the top-paying community, suggested four other cities that might be competitive, but which turned out to be way behind: Worcester pays $14,900; Springfield $12,000; and Brockton $5,000. Boston, with eight times as many students, pays a $7,500 stipend, which two members currently refuse.

Koocher estimates that most committees meet around 70 to 75 times a year, including all regular, special and subcommittee meetings; some meet up to 100 times, he said.

Several issues have been referred to subcommittees, supposedly where the meat of the committee work lies. Simmons has often urged discussions be pushed to subcommittees where members can “roll up their sleeves” to get down to details.

Some subcommittees have hardly met since the current members’ term began in January 2016, however. There are a dozen subcommittees, although the ad hoc superintendent transition subcommittee, chaired by Bowman, is effectively finished with its work, and an ad hoc subcommittee on attendance violation policy is relatively new and has not met yet. In addition to these three, the others are budget; buildings and ground; school climate; curriculum and achievement; community relations; governance; civic unity; special education; and contract negotiations (which alone must meet privately).

With the exception of the budget and the contracts groups, which are “subcommittees of the whole,” subcommittees have three members and need two to make quorum. Nolan has said it is protocol for the chair to schedule a time when all three can meet, which in some cases can hinder scheduling. 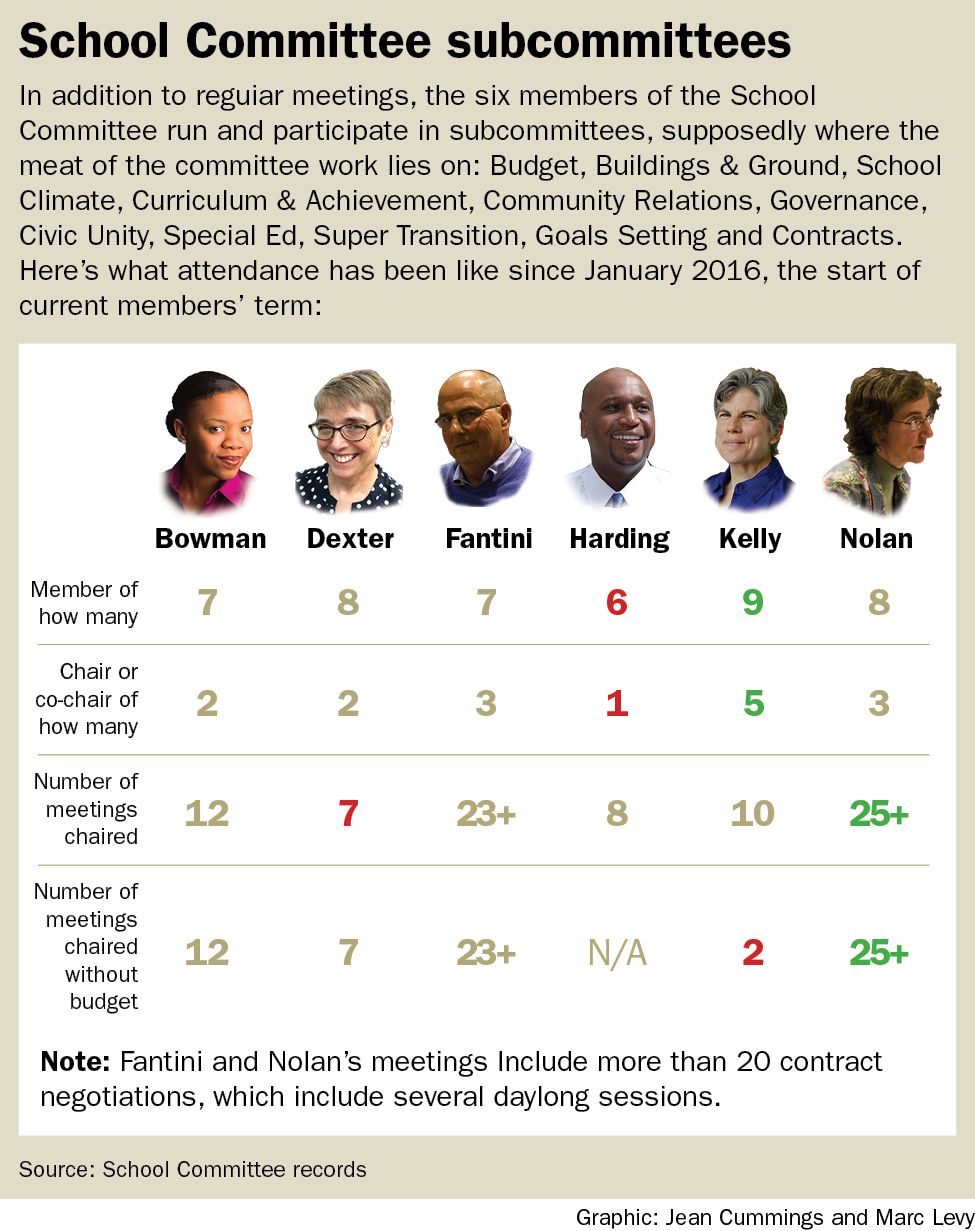 Nolan has had the most meeting for the contracts subcommittee, which she shares with Fantini – more than 20 often daylong private meetings with union members. Bowman’s buildings and grounds subcommittee has met the second most, after the budget meetings, with seven meetings in her term so far; that group produced a major policy revision. The special education, curriculum and achievement, and civic unity subcommittees, both chaired by Kelly, have each met once or twice in that time. 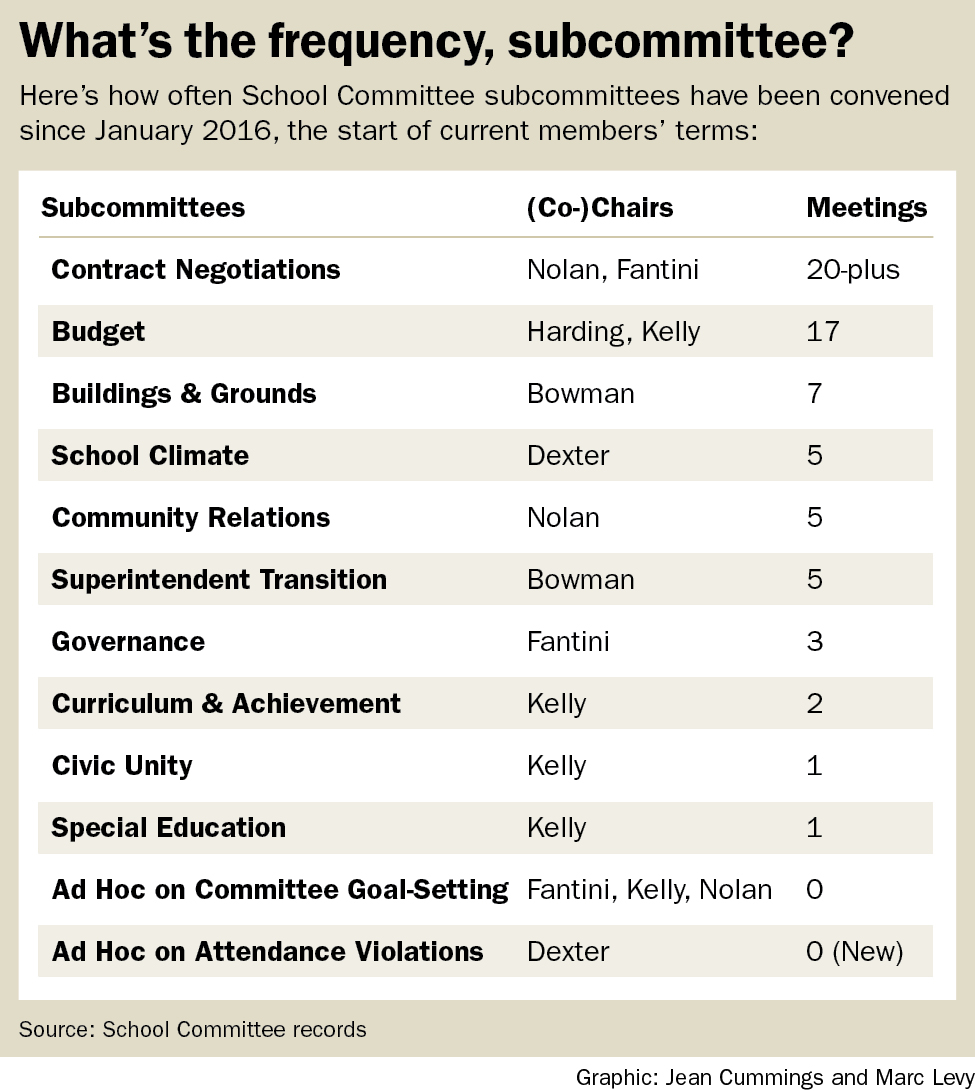 As committee vice chair, Fantini makes the subcommittee and chair assignments. Asked how he decides appointments, Fantini said he sends out an email asking for interest and tries to meet requests.

Asked specifically about why Kelly chaired the most committees at five – one of which is budget – he said:

I have a lot of respect for Kathleen Kelly, given she has a master’s degree in business administration and is a social worker, and works well with administration. Other members are very effective on the committee but have obligations like working full time that becomes a factor in appointing chairs. All members can attend subcommittee meetings, and are usually allowed to participate in the discussions.

Kelly did not respond to a request for comment on her subcommittee meeting schedule.

Bowman and Harding are the only committee members with full-time outside jobs.

This article was updated throughout Oct. 7, 2017, including in its graphics, to make reporting of the number of committees more accurate. It was updated Oct. 8, 2017, to correct figures concerning the contracts subcommittee.