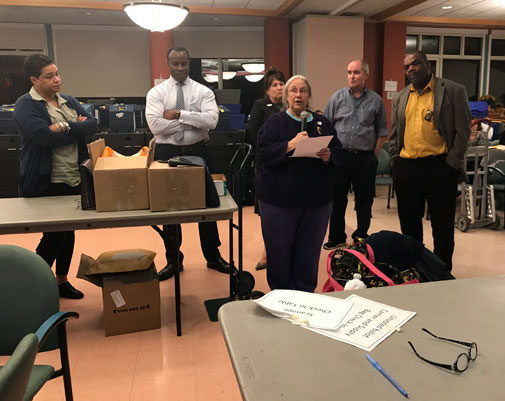 Cambridge voting results – usually slow to be revealed, thanks to the complicated, ranked form of voting used by the city – was delayed further late Tuesday. Election commissioners reported at around 11:10 p.m., more than three hours after polling places closed, that a failure of memory cards from three voting machines would delay results by an hour to an hour and a half.

That puts preliminary results coming as late as 12:40 a.m. Wednesday.

Such a failure hadn’t happened in 15 years, election commissioner Polyxane S. Cobb told a crowd gathered in Central Square’s Citywide Senior Center for the vote count. This is the final year for these machines; the city has said new voting machines will be in place for municipal elections in 2019.

The number of ballots that couldn’t be counted: 448 from Ward 7, Precinct 2; 873 from Ward 8, Precinct 1; and 1,139 ballots from Ward 11, Precinct 1. Cobb took no questions from the groaning crowd, but it was believed that the count included City Council and School Committee votes.

“We are preparing new memory cards for each,” Cobb said. “Once complete we will be able to run [the program] and report preliminary results.”

There are 26 candidates for council this year and a dozen for School Committee, and turnout was up about 16 percent from 2015.