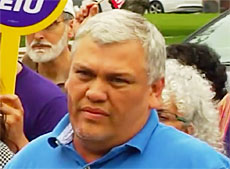 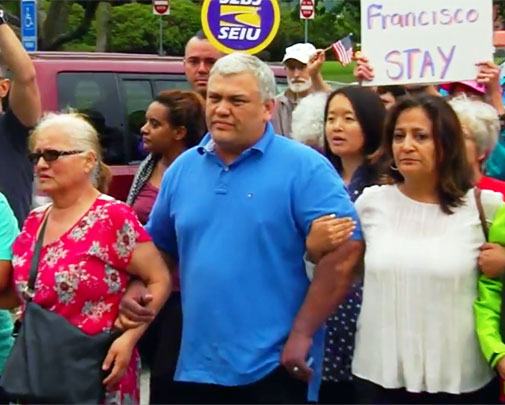 Francisco Rodriguez-Guardado marches at the front of a July 13 rally in Boston against his deportation, seen in a screen capture from a WGBH News segment. The video is below.

Appeals courts in Denver and Massachusetts have ordered that Francisco Rodriguez-Guardado, a Massachusetts Institute of Technology custodian, cannot be deported from the country until at least Dec. 7, blocking attempts by immigration authorities to send him – with potentially fatal results – to El Salvador this week.

The institute, SEIU union local 32BJ, the ACLU and others have rallied around Rodriguez, who came to the United States from El Salvador in 2006 seeking asylum. Rodriguez’s asylum claim was denied in 2011, but he was allowed to stay in the country and work; he is not a criminal. Then the Trump administration changed immigration policy and he was arrested in July – and has been in immigration jail ever since.

The government intended to deport Rodriguez this week, and Immigration and Customs Enforcement “has obtained travel documents for [Rodriguez] and has scheduled a charter flight from the United States to El Salvador between Nov. 27, 2017, and Dec. 4, 2017,” ICE deportation officer Michelle Plumb wrote on Nov. 22.

“I am shaken and deeply upset by the thought of Francisco being deported if the courts don’t allow him to stay,” MIT President L. Rafael Reif said on Sunday. “He has been in jail and, despite his living in this country for many years, working productively in a custodial job, having done what the authorities have asked of him and contributing tremendously to his community, I understand there is a very real chance that he will be deported from the U.S. If someone like Francisco is not good enough for our country, we have lost sight of our true values.”

“I saw him Tuesday,” Bennett said. “He’s lost quite a bit of weight. His health generally seems to be okay, but these last few days have been very difficult for him.”

Rodriguez, a married father of two, came to the United States in 2006. His request for asylum was denied by an immigration judge, and also by the Board of Immigration Appeals. But immigration authorities stayed his removal from the United States, requiring him to report in annually. He was allowed to work, and has been employed at MIT for the past five years.

In June, ICE ordered Rodriguez to return in one month with plane tickets to El Salvador. The institute arranged for him to receive free representation from Goodwin Procter, one of the top law firms in the country. Rodriguez lawyers began an all-out assault.

Rodriguez’s lawyers filed a petition to reopen his asylum case with the Board of Immigration Appeals on July 11. Bennett said the details of that were under seal with the courts and he “wouldn’t want to say anything that would potentially put him at risk”; but Bennett told the Massachusetts court on Friday that he believes removing Rodriguez from the country “will likely to result in his death.”

Gang members in El Salvador have threatened to kill him, Rodriguez has said.

The Board of Immigration Appeals agreed July 17 to stay Rodriguez’s removal – to not deport him – while evaluating the petition. But by July 13, ICE had detained Rodriguez anyway, taking him from his family and job.

Bennett filed a petition for habeas corpus relief in Massachusetts Federal District Court the same day, seeking to have Rodriguez released during BIA proceedings. He argued that immigration law restricts detention for more than 90 days after a final order of removal (which Rodriguez received in 2011), and limits holding detainees for more than six months without a bond hearing (resulting from Zadvydas, a 2001 Supreme Court case).

Judge Richard G. Stearns ruled against Rodriguez on Sept. 22, after months of litigation, saying because Rodriguez was detained for only two months, “the length of his detention does not offend due process” under Zadvydas.

Bennett appealed to the First Circuit Court of Appeals a month later, on Oct. 17. The court scheduled written briefings for late November through January. Rodriguez was in custody but safe from deportation during that time – or so he thought. During appeals of habeas petitions, appellate procedure Rule 23(a) prevents a transfer of custody of a prisoner without order of the court.

Then the BIA denied the motion to reopen the Rodriguez’ case. Bennett appealed that denial to the 10th Circuit Court of Appeals on Nov. 16. It has jurisdiction over Rodriguez’s case because of where his original asylum case was filed.

Bennett got a call from Department of Justice lawyers on Nov. 21 telling him they did not believe Rule 23(a) covered deportation, because deportation was not a transfer. ICE was to take action this week.

Bennett filed emergency motions Tuesday in the First Circuit and 10th Circuit. Boston acted first: “To give the court an opportunity to review the matter, we grant his emergency motion to the extent that his removal from Massachusetts is hereby stayed pending further order of this court.” It wasn’t clear how long this reprieve would last – the First Circuit didn’t give a duration – or what ICE would do.

The 10th Circuit asked the government to respond by 10 a.m. Friday – and it did not. “We literally didn’t know [Friday] what was going to happen. They still had him on the list to remove him to El Salvador on Monday,” Bennett said.

Noting the government’s lack of response, the 10th Circuit issued its own stay Friday and ordered a written briefing by Dec. 1, with Bennett to reply by Dec. 7. That meant Rodriguez was safe from removal at least until then.

“He was told he was taken off the [deportation] list and returned to his prior detention,” Bennett said. “We spoke. He was obviously very relieved.”

“This has been a very difficult couple of days. He had to have conversations with his family not knowing whether or not he would be on the country on Monday,” Bennett said.

It’s not clear why ICE decided to try to deport Rodriguez now. But Zadvydas offers one clue.

In a reply to the emergency motion filed Nov. 22, Assistant U.S. Attorney Annapurna Balakrishna wrote, “The six-month period recognized as presumptively reasonable under Zadvydas is nearing its end. Appellant should not be allowed to prevent ICE from removing him, thus prolonging his current detention, just so he can continue to challenge his detention in this court.”

Under one interpretation, the government would be hard pressed to hold Rodriguez much longer than Jan. 18, when the Zadvydas six months are up.