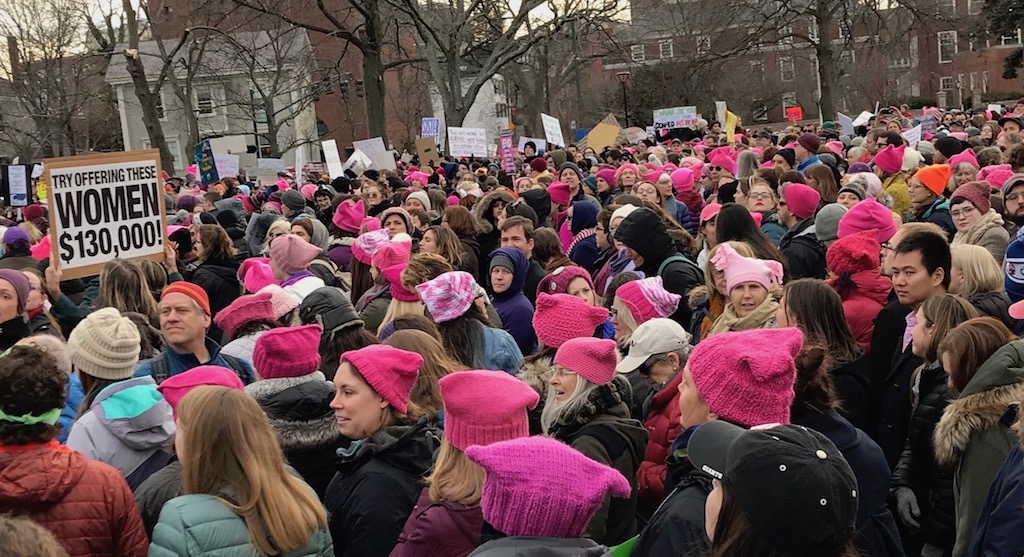 A Women’s March rally drew from 8,000 to 10,000 people to Cambridge Common on Saturday, far exceeding expectations, police and organizers said.

Part of some 250 events held worldwide to protest Trump administration policies, the event took place in the cold and on muddy grounds that grew sloppier fast as thousands of people roved the Common, seeking a spot where they could better hear and see speakers that included Maura Healey, the state attorney general, state Reps. Marjorie Decker and Mike Connolly and city councillors including Sumbul Siddiqui and E. Denise Simmons. Jan Devereux and Alanna Mallon were also in attendance, along with School Committee members Manikka Bowman and Patty Nolan, and Mayor Marc McGovern gave the opening speech. With the federal government shut down in the early morning, neither U.S. Sens. Elizabeth Warren nor Ed Markey could make it to Cambridge to speak, but they contributed statements that were read for them.

The speakers revved up the crowds for midterm elections, when a Democratic wave is expected to undo the Republican Party’s majority in the U.S. House of Representatives and therefore its legislative lock on Congress and the presidency.

“It would be easy on any given day to go to bed deflated and despondent, but that would only serve to strengthen [Trump’s] agenda of bigotry and exclusion,” Decker said. “But now we have all of you – an army of peace and justice warriors. We have an ocean of believers who know voting is the first step, but it is not the last step.”

Simmons was also effective at motivating the crowd during a loud call and response session vowing that “We’re not going to let nobody turn us around,” and saying the event would “let 45 know: You can’t do it here, you can’t do it now, you can’t do it ever.”

Attendees at the margins of the rally formed their own sub-rallies to chant or drum. That included a group of 20 or so counter-protesters, said Jeremy Warnick, director of communications and media relations for Cambridge police. 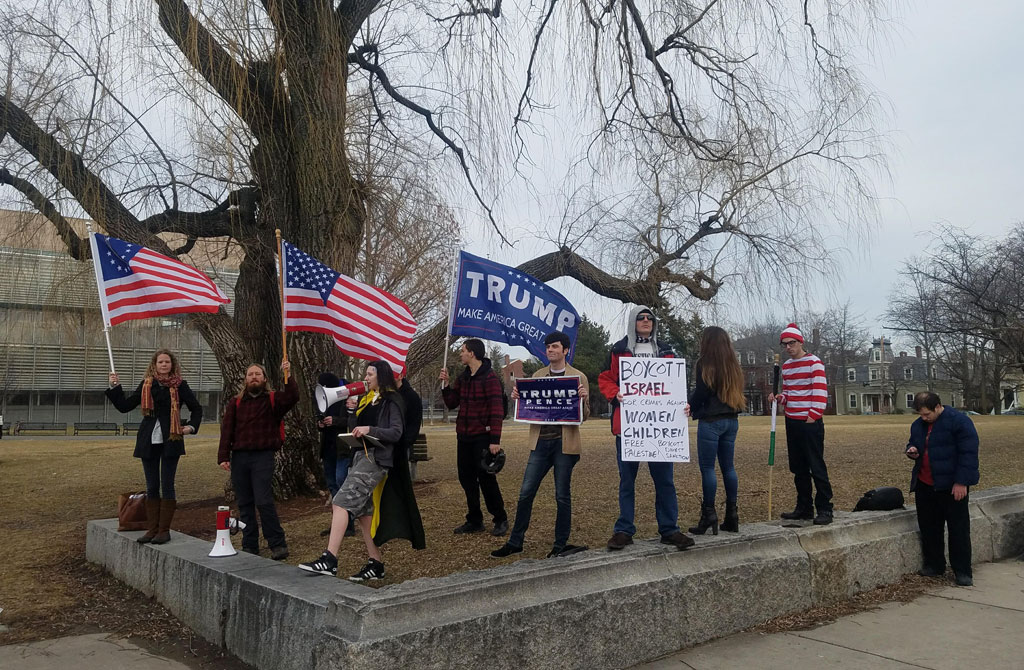 Though police brought in additional officers for the day for traffic and crowd control, there were no arrests, Warnick said, “and aside from ensuring separation between the participants and counter-protesters, there weren’t any issues.”

The crowds on the Common, coming from throughout New England, were far in excess of what the organizing January Coalition expected. “We were talking about maybe 2,000, maybe 5,000 people,” said Keith Bernard, while his wife, Zayda Ortiz, emceed the event from the central Civil War monument. Any shortcomings of the event, which came together quickly over the past five weeks, are “notes for next year,” he said.

There was more diversity among the speakers than in a crowd dominated by white faces – a point of pain among liberals who know that white voters got Trump elected and have since been seen as elbowing people of color aside in political protest and in the reawakened feminist movement. One sign in the crowd, held by a white woman, said “White women: Let’s do better.”

The first Women’s Marches took place a year ago, immediately after the Trump inaugural, and showed up the meager attendance at his shining moment with worldwide crowds of an estimated 4 million – many in immediately iconic, hand-knitted pink “pussy” hats that stood as a fierce but whimsical response to a president caught boasting on audio that he engaged in sexual assault by grabbing women “by the pussy.” 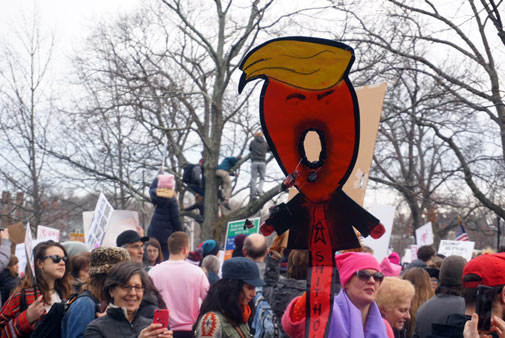 Trump’s comments were turned against him at the Saturday rally. (Photo: Tom Meek)

It was a striking example of Donald Trump’s power to affect discourse nationwide. By introducing the phrase to the campaign, he made a heretofore taboo term suddenly common in politics and the media; a year later, the result of Trump’s spoken beliefs and unrefined approach to speaking them were even more obvious. After his reported use of the term “shithole” to refer to countries with predominantly black populations, several handheld signs at the rally used his own language against him.

With speeches from the Civil War monument hard to hear, the Saturday rally continued another trend of recent public protest: The signs people carried were clever, powerful and varied, and for many people, checking out and taking pictures of them was as much a part of attending as getting fired up by speeches from the dais, or just showing up to be counted among the resistance.

Here are some of the signs that got attention at the rally, and their creators’ explanations of their origins: 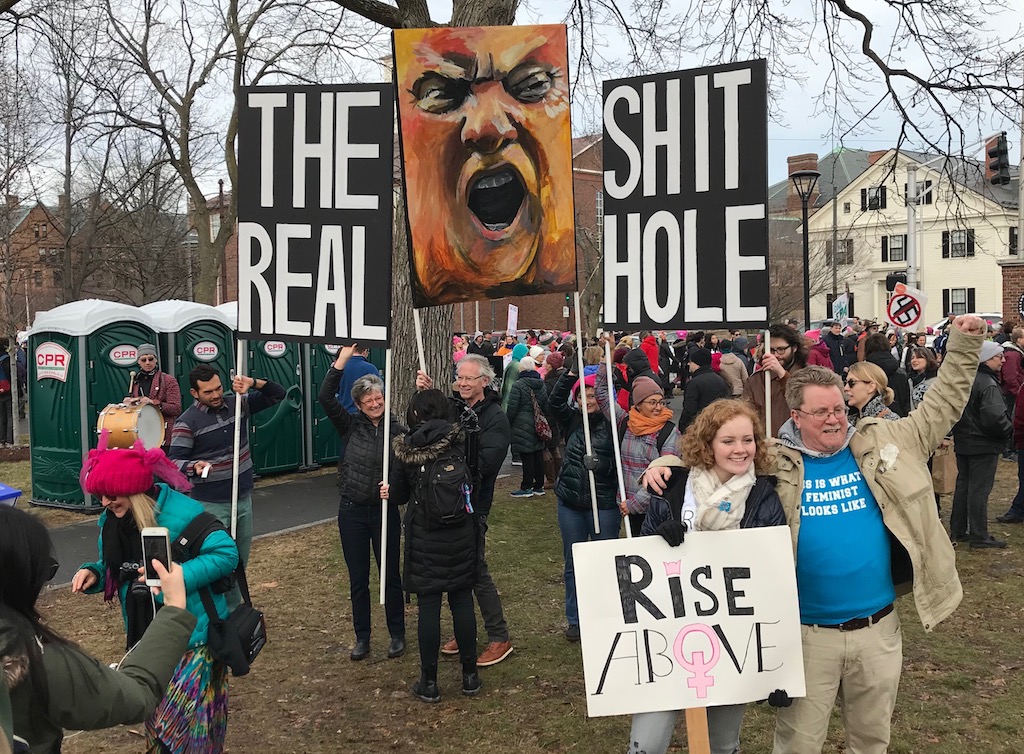 “The Real Shit Hole,” held by Vermonters Mary Flannery, her husband Chris Whitlock and Dan Chapman, among others. Among a family of artists, “we were sitting at the table the other night and I said, ‘I don’t have an idea for the Women’s March!’ But of course he gives us so much material, that president of ours,” Flannery said. It was her son who proposed the idea that “the real shithole is his hole – so just paint that.” It was Whitlock who took on the central image of Trump and Chapman, a third-generation sign maker, who provided the lettering on a protest triptych that had to be carried by a team of six. The crew fielded plenty of compliments and questions about whether there was a hashtag to go along with it. “We just retired, so now we think we might be professional painters of protest signs,” Flannery said. 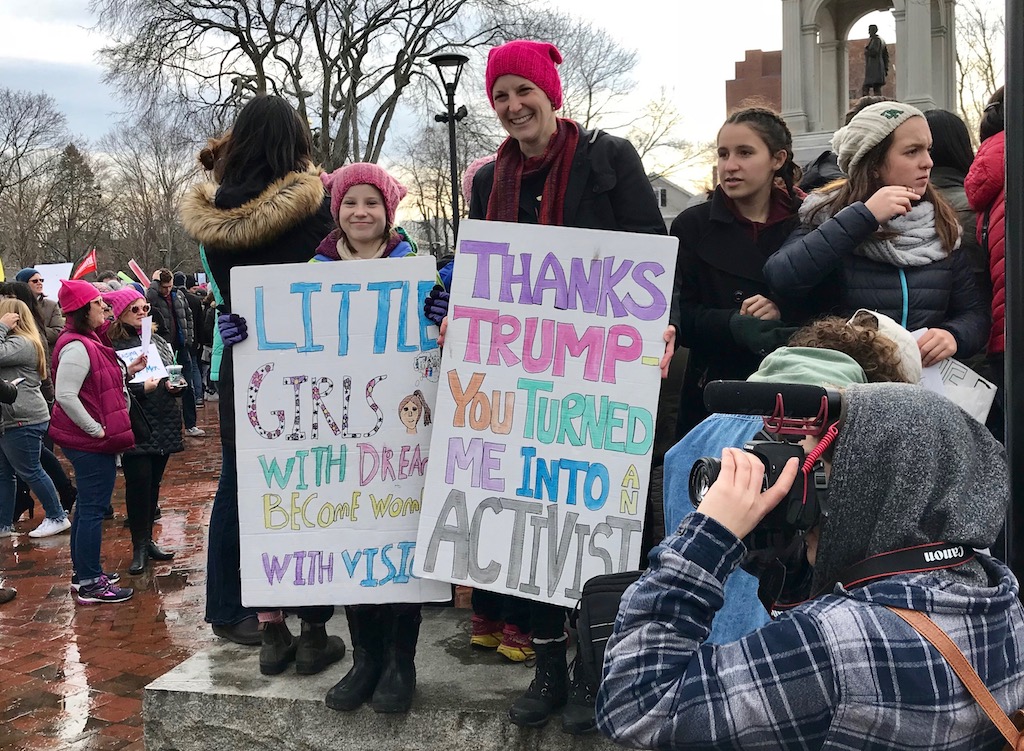 “Thanks, Trump, You Turned Me Into an Activist,” held by Anne Meyers, of Deerfield, N.H., and “Little Girls With Dreams Become Women With Vision,” held by daughter Caledonia Mahon, 9. “We went to Washington, D.C., last year for the Women’s March and we had hats but not signs, and I swore that we would never go to another protest without. We’ve been working on these for a week,” said Meyers, explaining that her message was sincere – though a consistent voter, it was Trump’s election that gave her “more of a desire to get out into the community and find places where I could make change and not just complain.” It was having children that really raised the stakes, she said, convincing her that “this can’t stand. This is insanity.” Caledonia said she’d been excited by the sheer size of the crowds in Washington, and inspired by the signs carried among them. 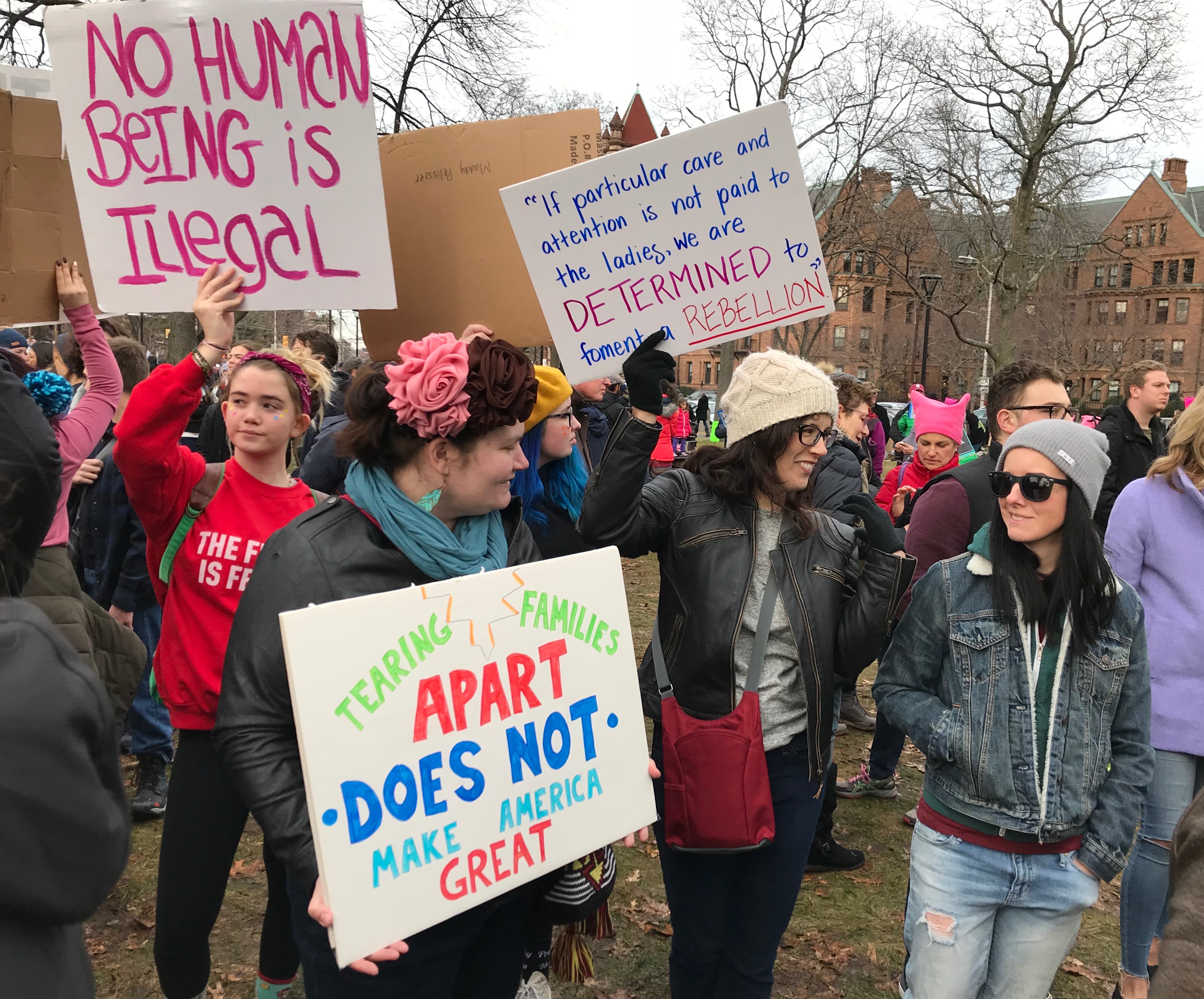 “If particular care and attention is not paid to the ladies, we are determined to foment a rebellion,” held by Jen Wallingford, a teacher from Hudson. The source for this quote dates back to the founding of the United States of America: “In one of my classes we read Abigail Adams’ letters to her husband,” Wallingford explained. “I think it was written during the Constitutional Convention – she basically wrote him a letter that said that while the Founding Fathers were working to construct the government, they should remember the ladies.” 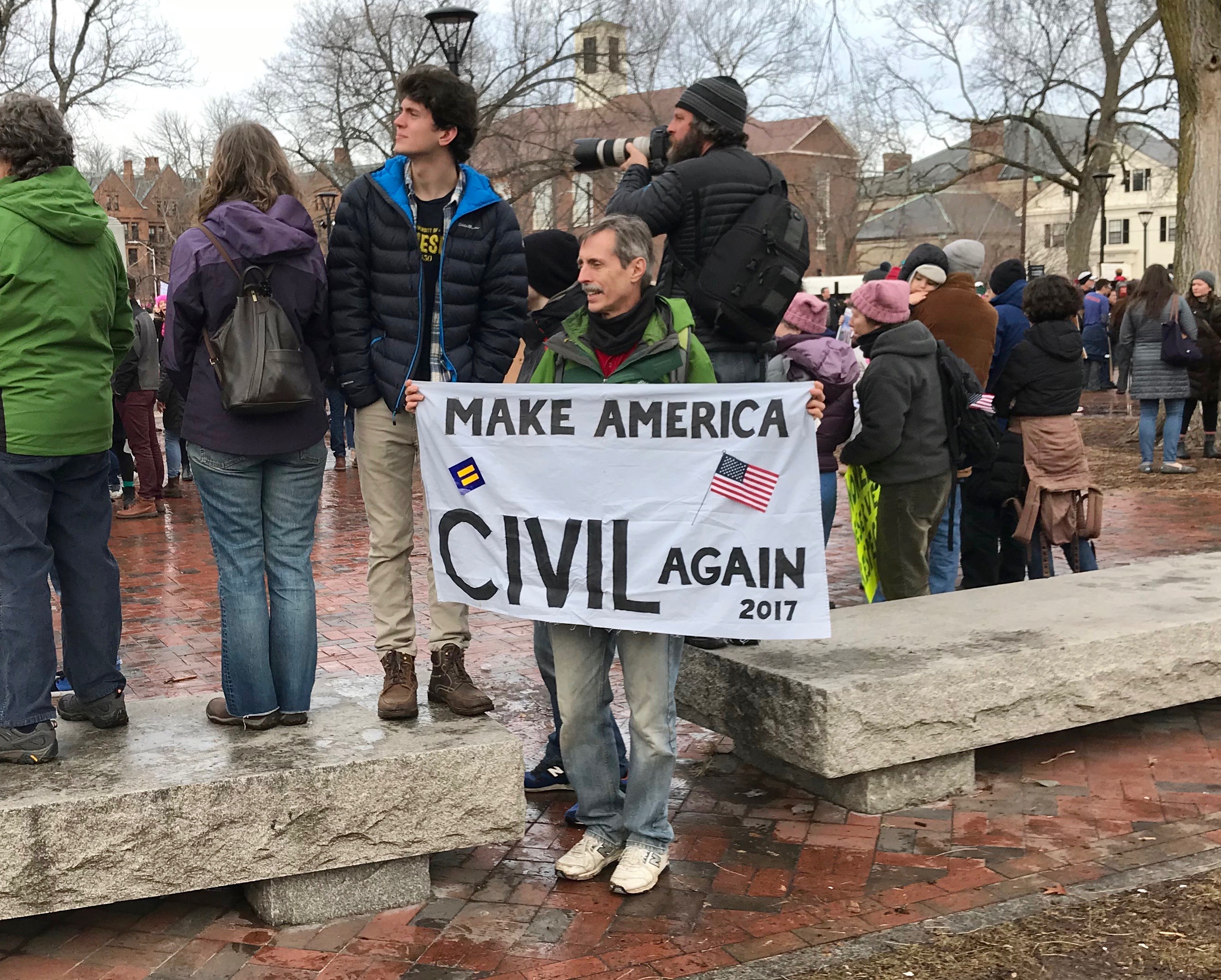 “Make America Civil Again,” held by Neal Mongold, of Arlington. The banner was made for the  March on Washington last year, when “it seemed like a relatively low threat,” Mongold said. “But now, after living through a year of this president, it seems a bit faded, almost too gentle. I rolled it out again because was my thought was, at least if we start to kind of go back to the beginning and try to be civil to each other and respect one another, we might make some progress. But that’s why I feel it seems kind of dated – because we’ve had a year where every day is a new threshold of incivility and vulgarness.” 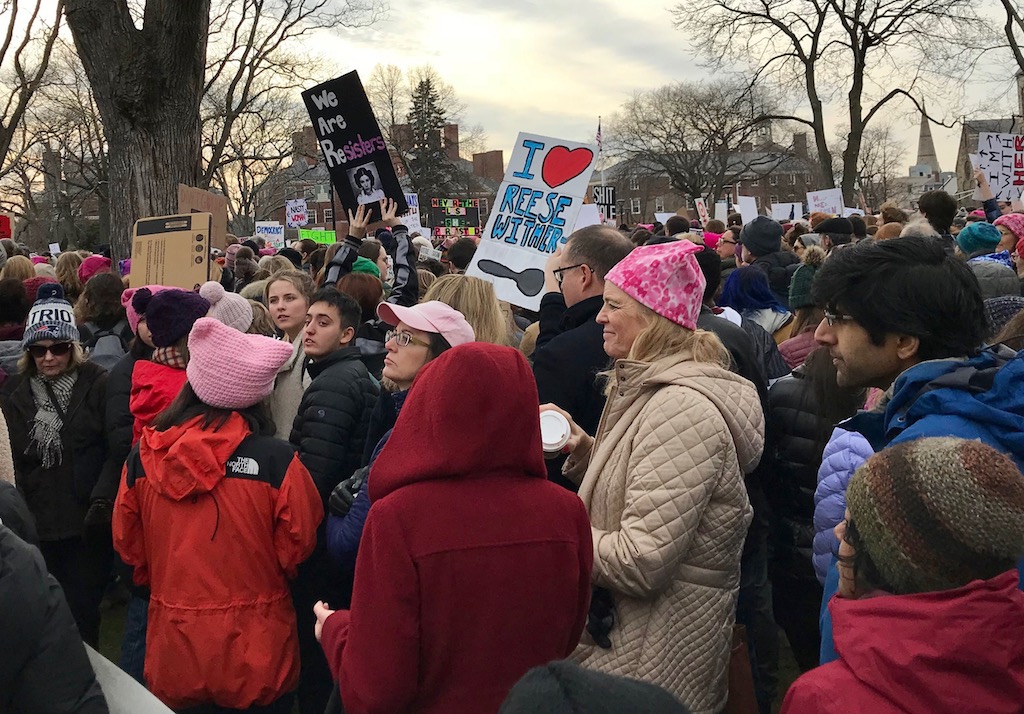 “I [Heart] Reese Wither-[Spoon],” held by Sydney Brown, of Boston University. Was there more to this rebus than met the eye? Brown, of Pittsburgh, went positive with a sign honoring the actor – because Witherspoon helped form the #TimesUp movement fighting sexual harassment, assault or abuse in the workplace, but also just because “I also watched ‘Big Little Lies’ right before coming back to school here, so I was thinking about Reese Witherspoon a lot and thought I should make a sign for her, because she’s awesome.”

More signs seen at the event: 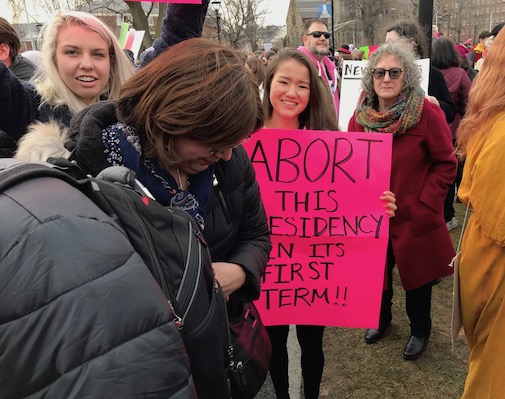 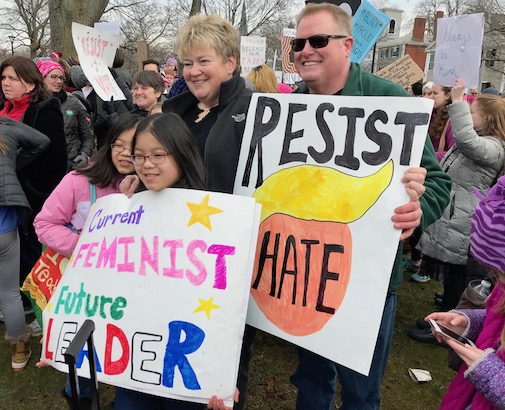 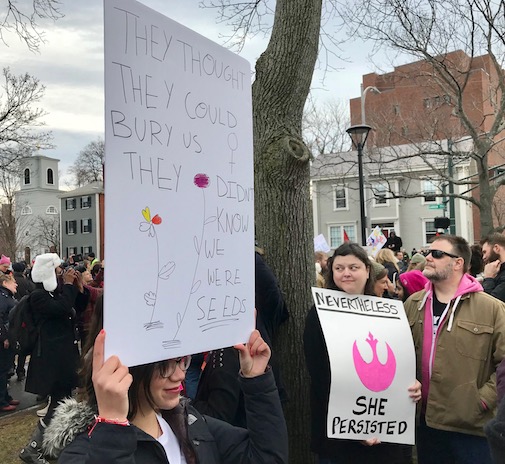 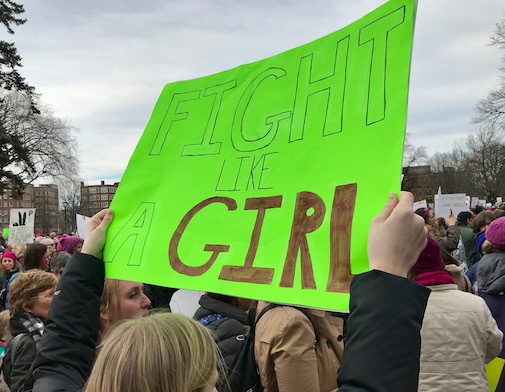 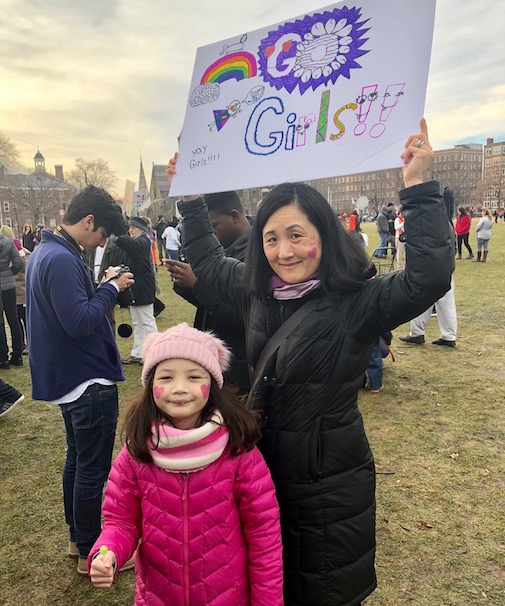 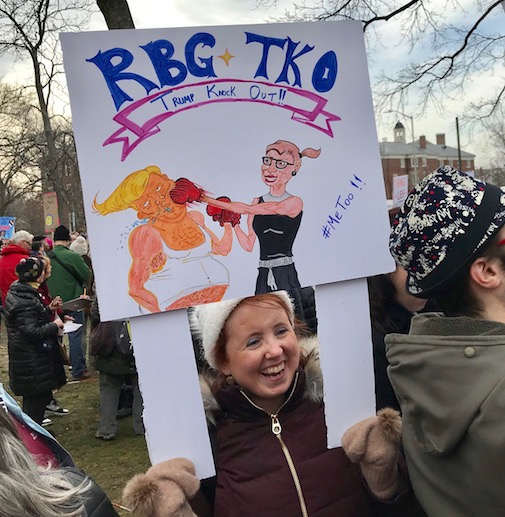 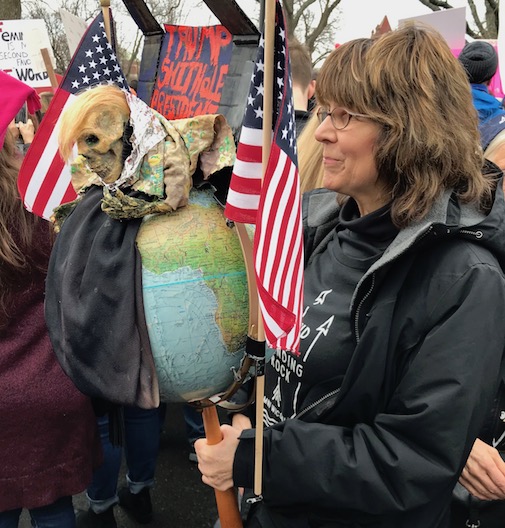 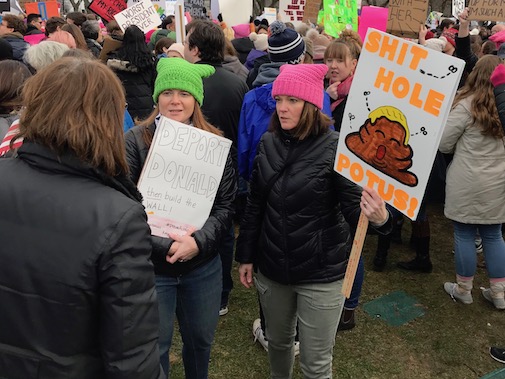 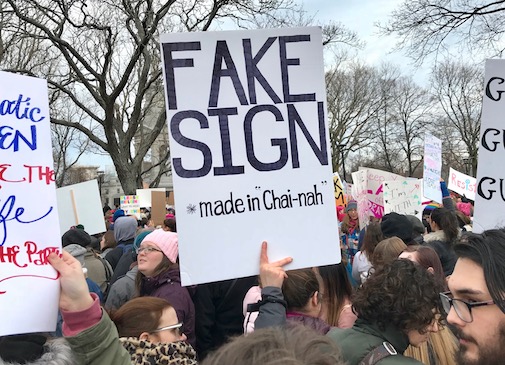 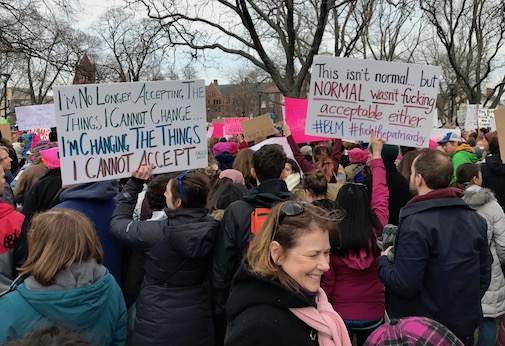 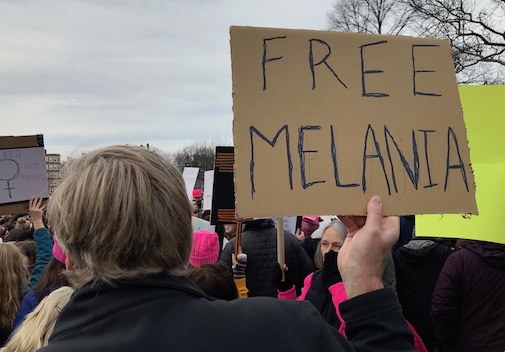 This post was updated Jan. 21, 2018, with a photo by Terzah Tippin Poe of a pro-Trump rally, and with a corrected quote from remarks delivered Saturday by state Rep. Marjorie Decker.