Pimping King: Truck ad was built to exploit, but it’s MLK’s own estate making it possible 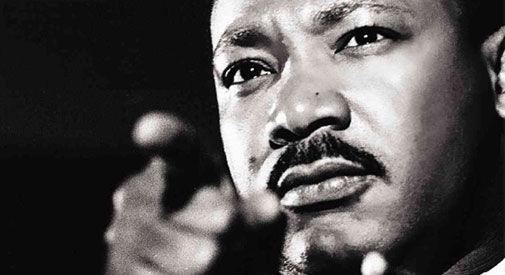 Pimping King: Truck ad was built to exploit, but it’s MLK’s own estate making it possible

With this year being the 50th anniversary of the Rev. Dr. Martin Luther King Jr.’s assassination, commemorations honoring the man will be taking place across the country. Who would think this is the time for a Super Bowl ad to use a King voice-over to sell pickup trucks? The pitch for Dodge Ram trucks’ “Built To Serve” Volunteer Program did just that, provoking a fast and furious backlash on Twitter and a rebuke from The King Center.

Adding insult to injury, the commercial’s narrative arc from beginning to end misappropriates MLK’s essential message in his 1968 speech, “The Drum Major Instinct.”  The speech rails against materialism – using cars as an example.

“Do you ever see people buy cars that they can’t even begin to buy in terms of their income? You’ve seen people riding around in Cadillacs and Chryslers who don’t earn enough to have a good T-Model Ford,” King said in his sermon.

Black misrepresentation in commercial advertising is not new. The exploitation of black talent and the objectification of black bodies and images to pad the pockets of profit-making corporations under the guise of helping underserved populations and communities is also not new.

We all remember last year’s Pepsi commercial fiasco starring Kendall Jenner. The ad preyed on racial and ethnic stereotypes in its attempt to expand the brand to a multicultural consumer base. It also misappropriated the iconic and viral photo of Ieshia Evans, the 35-year-old African-American mother who stunned the nation and world when she walked silently to the front line of heavily armed police during a 2016 Black Lives Matter protest in Baton Rouge, Louisiana, and offered her hands to be arrested. Jenner reenacts it with a white hero/rescuer trope, thwarting a possible riot in the commercial simply by offering a white cop a Pepsi.

The Dodge Ram commercial is not so egregious. The Ram Nation Volunteer Program’s mission is supposedly not to sell trucks, but to highlight how “Ram Truck owners are a special breed” serving all of humanity “from disaster relief to blood drives or even just cutting a neighbor’s grass.” Its webpage quotes MLK saying “Everybody can be great because everybody can serve” to bolster its claim.

The use of revered historical figures to pitch products has become a popular advertising strategy,  even if there’s backlash. In a 30- to 60-second television spot, like the high-viewership ads at the Super Bowl, they sell commercial products because their iconic stature draws consumer attention instantly and the story behind their images resonate. A 2012 Red Bull commercial mocking Jesus’ walking miraculously on water received an outcry from Christians across the country, myself included. The energy drink maker dropped the ad immediately, but its sales soared.

While I find the Dodge Ram truck commercial disrespectful and dangerous in this era of fake news, alternative facts and revisionist history, the commercialization of King suggests that the money that can be made from King is more important than his message. Sadly, the Ram ad is not the first time King has been repackaged to sell a product. In 2001, King’s world-renowned “I Have a Dream” speech was used in print and TV for Alcatel, a telecommunications and networking equipment company. Alcatel wanted to co-opt the speech to give it a “Forrest Gump”-like spin. Can you imagine?

The pimping of profit from King’s legacy, however, has been aided by King’s youngest son, Dexter. He treats his father’s speeches as commercial literary works, charging license fees for use. Regrettably, Dexter runs intellectual properties management for the King estate, appearing not to distinguish between commercializing MLK from communicating him to younger and wider audiences. The aim is to maximize revenue by any means that presents itself. This time it was for a truck ad.