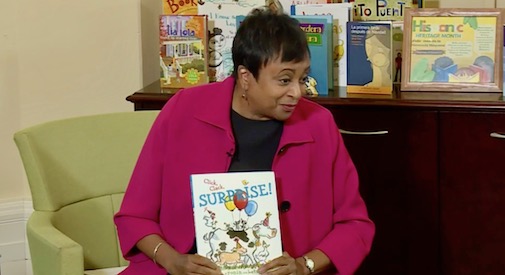 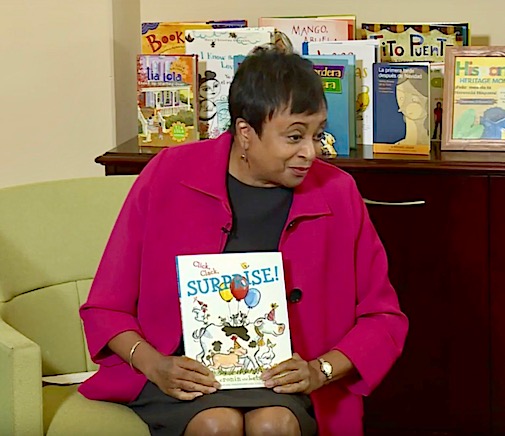 Carla Hayden, librarian of Congress, surprises children with a story time on her third day in office, Nov. 15, 2016. (Image:
Library of Congress)

Story time at the Cambridge Public Library is special March 17, because the story teller is Carla Hayden, the 14th Librarian of Congress. She’s Cambridge’s likely favorite federal leader – not only is her career all about books, but she’s a holdover from the administration of President Barack Obama, having been nominated to the position Feb. 24, 2016, and confirmed by the U.S. Senate on July 13, 2016.

Hayden is the first woman and the first African-American to lead the national library.

Before her arrival, Hayden led the Baltimore library system, where she decided to keep a branch open in April 2015 amid civil unrest for the funeral of Freddie Gray, 25, who died in police custody after an unjustified arrest. “Cars were still smoldering in the streets. Closed signs were hanging in storefronts for blocks. But people lined up outside the doors of the library,” Hayden recalled during her Sept. 14, 2016, swearing-in.

“Poignantly, people of my race were once punished with lashes and worse for learning to read,” he said. “As a descendent of people who were denied the right to read, to now have the opportunity to serve and lead the institution that is our national symbol of knowledge is a historic moment.”

The story time with the Librarian of Congress will take place between 11:30 a.m. and noon March 17 in the children’s room at the Cambridge Main Library, 449 Broadway, Mid-Cambridge. Guests are asked to arrive by 11a.m., as seating is limited at this event, said Maria McCauley, Cambridge’s director of Libraries.a