‘You Were Never Really Here’: Painful past propels a rescue, with only hammer at hand 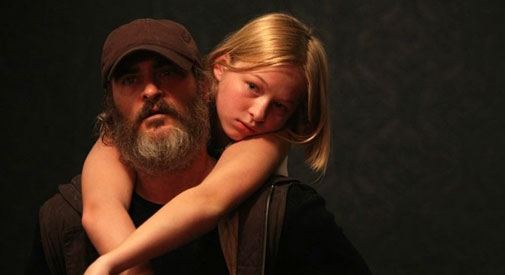 ‘You Were Never Really Here’: Painful past propels a rescue, with only hammer at hand

Seven years ago Scottish director Lynne Ramsay served notice with the psychological thriller “We Need to Talk About Kevin.” In that film, a family is torn apart by a son’s increasingly disturbed behavior. Things proceed edgily and eventually go off the rails, violently and shockingly. In her latest, “You Were Never Really Here,” audiences don’t have to wait long for an eruption of carnage when an equalizer/hitman is employed to retrieve a state senator’s daughter from a high-end brothel in midtown Manhattan. 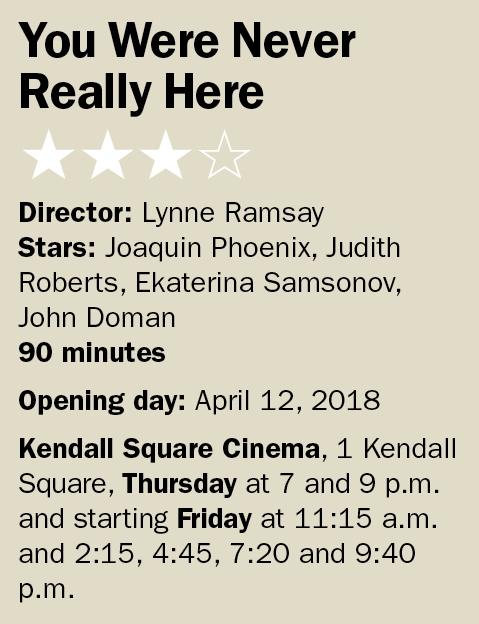 If that sounds like the boilerplate to “Taken” or “Taxi Driver,” you’d be right to think so – at least on paper – but for Ramsay, getting at her protagonist’s state of mind and backstory is anything but a linear exercise. In wisps we catch Joe (Joaquin Phoenix) in military fatigues within the confines of a desert encampment feed a candy bar through a chain-link perimeter to a youth who is promptly shot dead by a surprising source. Later, ostensibly in the FBI or some investigative law enforcement unit, Joe uncovers a van full of dead bodies. And then there are the flashbacks to a highly abusive father and Joe’s attempts at suicide via asphyxiation (dry cleaning bags being the impermeable of choice). These images are littered throughout, giving brushstrokes of insight to the enigmatic Joe, bearded, burly and employing the peen end of a hammer to bash his way through his first assignment. To save the senator’s daughter (Ekaterina Samsonov), he employs the same implement – a new one of course, selected carefully from the hanging racks of a Home Depot, Ace Hardware or the like – working his way through the Manhattan brownstone in a more “Old Boy” style than Travis Bickle might consider.

From there the plot deepens and, even with Ramsay behind the lens begin to slide towards familiar and predictable territory. Mood and motivation, however, gird it. The lush, dark cinematography by Thomas Townend (“Attack the Block”) and haunting score by Jonny Greenwood (Oscar nominee for “Phantom Thread”) combine to create an effectively fraught atmosphere, while the central performances by Phoenix and Samsonov become essential to the film’s success. Phoenix projects a heavy, world-beaten persona; Joe is clearly as self-destructive as he is full of lethal resolve. Samsonov, such a charmer in Todd Haynes’ “Wonderstruck,” raises her star star value here, evoking the likes of a young Jodie Foster in “Taxi Driver” and Chloë Grace Moretz in “Let Me In.”

What Ramsay has accomplished is a cerebral portrait of a tortured soul that’s bone-bruising in execution. Her scant few other features, “Ratcatcher” (1999) and “Morvern Callar (2002) also demonstrated a deft nose for character and conflict set against emotionally dark landscapes. The one worry fans of the auteur may harbor is the prospect that it’ll be another seven years until her next gem. We can only hope that’s not the case.

If you’re curiously drawn to the mouthful of a title from the Jonathan Ames book, there’s good reason: It bears an uncanny similarity to the now notorious 2010 faux-documentary that Phoenix starred in, “I’m Still Here,” in which the three-time Academy Award nominee, playing himself, allegedly quits acting to become a rapper. No one would remember the film except for the promotional prerelease vagueness regarding its authenticity (did Phoenix really quit, or was it a hoax?) and the complaints leveled against director Casey Affleck long before the #MeToo movement found footing.