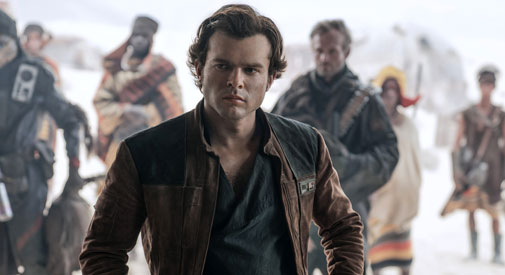 “Solo,” the new “Star Wars Story,” is a fun galactic go, breezy and lithe with just the right amount of darkness. That said, it doesn’t do much to deepen the whole Star Wars mythos the way “Rogue One” so ingeniously did back in 2016. That first “story” implied a series of one-off backstories that would embrace and extenuate the goings-on in the three “Star Wars” trilogies (we’ve gotten eight to date, with one more to go). “Solo” does the former, giving us an intimate look at the young Han Solo pining away for a woman who isn’t Leia, but two and a half hours later, I was wondering: To what end? After all, the mature Han, as played so iconically by Harrison Ford, perished in “Episode VII: the Force Awakens” (of course, we know a return is not out of the realm of possibility) and the big reveals that made “Rogue One” such an inviting companion piece are scant here by comparison. “Solo” does answer the long lingering questions of how Han got his name, how he and Chewbacca met and how they got their mitts on their Millennium Falcon. But it also raises a few.

At one point in the movie, someone says, “It’s not about you.” It’s an astute observation, as the film is at its thriving best when the screen is filled by the potpourri of personality that orbits the pivotal pilot of the title. The problem with Han (played by Alden Ehrenreich) as a character here is that he’s just not all that interesting of a dude, or in the least close to what was hinted at by Ford’s wisecracking incarnation. Also too, and I hate to say it, Ehrenreich is no Ford – not even a shadow. He tries, but you spend more time searching for vestiges and mannerisms of the Han you know than you are transported to the then and there.

It’s a tough sell, but fear not; the film is in the capable hands of veteran Ron Howard (“Lego Movie” helmers Phil Lord and Christopher Miller were forced out early on) who delivers the crowd-pleasing punch that has made so many of the winning chapters indelible over time – of course, John Williams’ timeless score practically guarantees that in its own right. We catch up with the young Han on the bleak ship manufacturing planet of Corellia, where Han’s something of a juvie with eyes for fellow lost youth Qi’ra (Emilia Clarke). They barely get to neck in a souped-up speeder before Han gets sucked into Imperial army (he wants to be a flyboy) and Qi’ra is whisked into the service of a murderous mercantile gangster named Dryden Vos, who as played by Paul Bettany is no heavy-breathing villain under a mask, but a sartorially minded, flashy and viciously articulate baddie more akin to Sting’s Feyd-Rautha in “Dune” than any lightsaber-wielding Vader.

The pairing with Chewy and intermittent meetups with Lando Calrissian (played perfectly with soul and sass by Donald Glover, who casts a Billy Dee sparkle) around the galaxy are fine, but the film finds its rocket burners when Vos and a swashbuckling opportunist named Beckett (Woody Harrelson, accented with a weedy coif that feels like it needs a growing out) crowd the edges. The film really does belong to Beckett, and that’s both its saving grace and weak-kneed lameness. He cuts deals with Vos to hijack deliveries of coaxium (an ultimate and coveted power source; think of it like vibranium in “Black Panther”) and takes Han along as the getaway driver. Qi’ra factors back in, though her murky motivations sometimes feel more beholden to the plot (co-written by Lawrence Kasdan, who penned the greatest episode of them all, “The Empire Strikes Back”) than her heart. She feels half drawn, but Clarke of “Games of Throne” fame enchants when on screen; there’s a dark ebullience in her eyes, and that’s enough.

Also adding great effect in small dashes are Thandie Newton as Val, Beckett’s better half and part of his ragtag raiding posse, and Phoebe Waller-Bridge as L3-37, Lando’s wide-hipped droid. Spouting social justice and feminist rants and confessing romantic feelings for her handler, she’s everything R2-D2 and C-3PO and BB-8 brought to the table on a comedic level and more. Droids capable of emotion? It’s out there in the shadows in other chapters, but here it blasts into a whole other universe.

Overall, “Solo” is best when in team effort mode. It’s also not a one-off per se, as there are clear hooks at the end for future fodder. Which makes you wonder: Is “Solo” to become its own series? What other “stories” are in the works (Lando and L3-37 seems like a layup)? And what happens after “Episode IX,” in the hands of reboot master J. J. Abrams? Also, “Solo” – for reasons that will not be discussed here – will surely trigger a hearty debate about timelines and events across episodes and stories in a far-away galaxy.