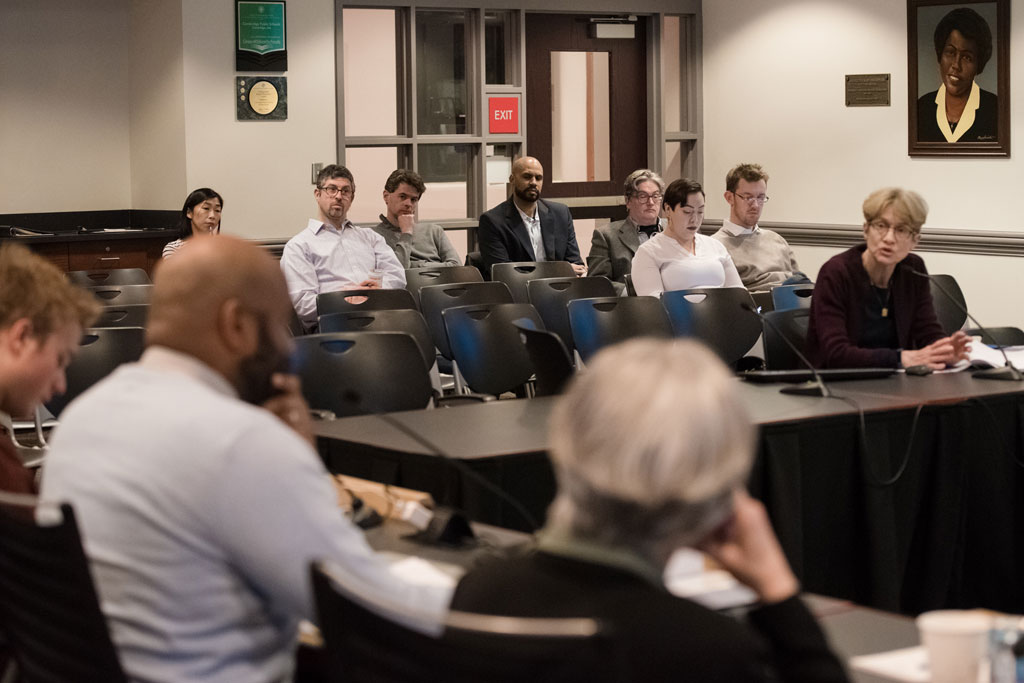 Issues of transparency between the school administration and School Committee popped up in significant ways at the committee’s penultimate meeting of the school year, surprising members with news of policies being set without them and amounts in the hundreds of thousands of dollars being moved around.

Noting that next year’s budget adds a Cambridge Rindge and Latin School guidance counselor, a motion by vice chair Kathleen Kelly and member Patty Nolan asked June 5 that “any recommendations by the superintendent on the policy of allocation of guidance counselors” would get input from the committee and high school staff, students and families before adoption.

But Superintendent Kenneth Salim confirmed that a decision had been made about a new department structure: The new hire will work exclusively with ninth-graders, resulting in two counselors for first-year students. Students will switch to different counselors in 10th grade.

Nolan had heard it from parents, who’d been told by counselors. Surprised, Nolan asked administrators the week before the meeting and “was told that a decision had not been made.” (The decision was made “at the end of last week,” Salim explained.) In some ways, it was reminiscent of the committee learning from whispers in November 2016 about the high school Level Up program ending “tracking” of students in English and history. The program was initiated and implemented largely without committee involvement.

Nolan, wanting to strengthen student connections to an adult and ease major transitions, said she worried about students switching counselors their sophomore year.  Members Manikka Bowman and Laurance Kimbrough – once a CRLS guidance counselor – had no issue with the new structure, with Bowman saying she understood it “would be more dynamic.”

They also referred to the new hire as “being geared to those students who need more support” – although Nolan and member Fred Fantini confirmed later that they had not received any information on the structure, let alone about any such focus.

Bowman and Kimbrough also objected that “this is in the weeds” for the committee, per Bowman. “We hire people to operationalize things – this feels like this is not our job” to be involved in structural decisions, she told committee colleagues.

Mayor Marc McGovern ended up chartering the motion, as the issue was now moot.

A budget issue not dealt with so quickly came next, emerging in a surprising way.

Supporting student travel – or not

A motion by Fantini, McGovern and Kelly to create a “Falcon Travel Fund” to help subsidize student summer travel programs, seeded with “available year-end balances,” was met with stiff opposition from at least three members.

“I fundamentally oppose the way this is coming before our body,” Bowman said. “We talk about equity and transparency. There is nothing transparent about bringing a community group to the School Committee,” she said, referring to the nonprofit Council on International Educational Exchange representative appearing in public comment. “I want us to stop doing this because it is disrespectful and rude,” she said.

In less sharp tones, Nolan and Dexter agreed that they were unwilling to provide some unknown funds (to be determined by the superintendent, the motion said, although “up to $50,000” had been floated during public comment) to send “a handful of students” instead of “funding an entire summer literacy program for all kids who are behind … or send all eighth-graders to D.C.,” Nolan said. The decision to fund such a program – even though, Bowman, Nolan and Dexter agreed it was a great one – belonged in budget discussions to be weighed against other expenses, they said. Dexter calendared the motion, saying later that it was late and she wanted to hear from co-motion makers Kelly and McGovern.

Reached afterward, Fantini said that he was still passionate about the program and would seek other funding sources. “It’s life-changing,” he said. The idea of creating a fund was his own, and, sparked by the idea, he approached the teacher and Friends of CRLS representatives who had worked with the education travel groups and who supported the idea in public comment.

It was during the discussion of Fantini’s motion for travel funds that Dexter asked the superintendent how much money was left over in the budget.

“We don’t have the final information at this point,” Salim said.

Fifteen minutes later, the committee took up a superintendent motion recommending that $425,000 of a “projected unexpected balance” be used this summer for improving the wireless infrastructure in the Amigos, Cambridgeport and Kennedy-Longfellow/Cambridge Street schools and parts of the high school, plus miscellaneous building improvements. This balance comes from unused funds in fuel, unemployment, building rental, telephone and other accounts, the motion specified.

Fantini immediately exercised his right to set aside the motion without discussion, thinking, he confirmed later, of his thwarted motion to use leftover funds.

“Is it time sensitive?” McGovern asked, suggesting that the funding needed to be addressed in this meeting or could not be used this summer.

Fantini reversed course before the end of the meeting, though, and the topic was on the floor.

“A point of information,” Bowman said. “We just had a conversation around how much money was left in this fiscal year and it was said that we didn’t know – and now we do know?”

“Very imprecisely we know,” said Claire Spinner, the district’s chief financial officer. “We would not have put this transfer on the agenda if we did not believe that these balances exist.” The city manager had asked them, said Spinner, “to ensure that somewhere between $300,000 to $400,000 is left on our bottom line” by the end of June. “It would be virtually impossible for us to comfortably have a [budget] that got so close to zero.”

Spinner said that “even with this transfer we will be at around $300,000 to $500,000” left over to be a buffer for last-minute expenses – a result of Spinner’s conservative budgeting to ensure the schools don’t end in the red. With a $191 million budget, that represents under two-tenths of 1 percent. Remaining funds at the close of the school year revert back to the city budget.

“I’m happy to approve this because it doesn’t sound like we have any choice,” said Dexter, clearly with the rest of the committee hearing the numbers for the first time. “But the idea that we are leaving a half-million dollars on the table that is going back to the city – as a budget co-chair I can tell you that that is alarming, because I can imagine what we could have done with a half-million dollars.” Understanding “the impossibility of getting to preciseness,” she suggested that in the future remaining money could be transferred to a fund in the control of the school department.