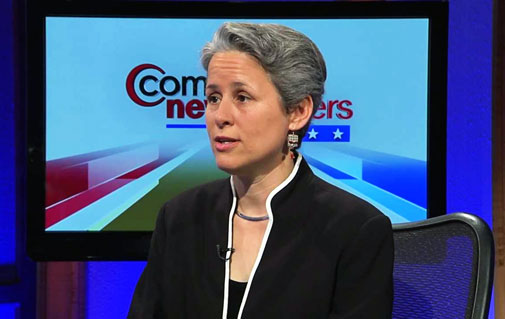 Julie Wormser, seen in 2013, starts Monday as leader of a new regional program by the Mystic River Watershed Association.

After record-setting floods in January and March, the Mystic River Watershed Association said Friday that it is updating its mission and adding resources to help communities manage extreme weather coming as a result of climate change, giving Cambridge an ally in concerns seen in efforts such as the Envision Cambridge planning process.

“Three of the U.S. cities most engaged in climate preparedness – Boston, Cambridge and Somerville – are located in the Mystic River Watershed,” said Julie Wormser, hired by the association to lead the new regional program with a $115,000 grant from the Barr Foundation. “This grant will allow us collectively to share information and lessons learned since Superstorm Sandy with lower-resourced municipalities. By working regionally and with the state, we can also create multiple benefit solutions such as riverfront greenways that double as flood protection. It’s very inspiring.”

The Mystic River watershed covers 21 cities and towns as far  Woburn through Revere. This spring, association staff met with around 50 state and local representatives to hear how the regional association could help them become more resilient to flooding, drought and heat. “We heard over and over from cities and towns that they can’t manage flooding from just within their municipal boundaries,” said Patrick Herron, MyRWA’s executive director. “Stormwater flooding in Medford, for example, has its origins in upstream communities. Coastal storms below the Amelia Earhart Dam threaten both New England’s largest produce distribution center and Logan Airport’s jet fuel supply.”

MyRWA applied for the Barr Foundation grant based on the feedback, he said, then reached out to Wormser – who, as executive director of The Boston Harbor Association, had been prominent in drawing attention to Boston’s need to prepare for coastal flooding from extreme storms and sea level rise. She co-wrote “Preparing for the Rising Tide” and “Designing With Water” and co-led the Boston Living with Water international design competition with the City of Boston and Boston Society of Architects. She will join MyRWA as its deputy director beginning Monday.

“The Barr Foundation’s climate resilience grant-making has historically focused on Boston. Yet we know climate change is no respecter of city boundaries. If some act in isolation, neighboring communities could actually become more vulnerable,” said Mary Skelton Roberts, co-director of Barr’s climate program.